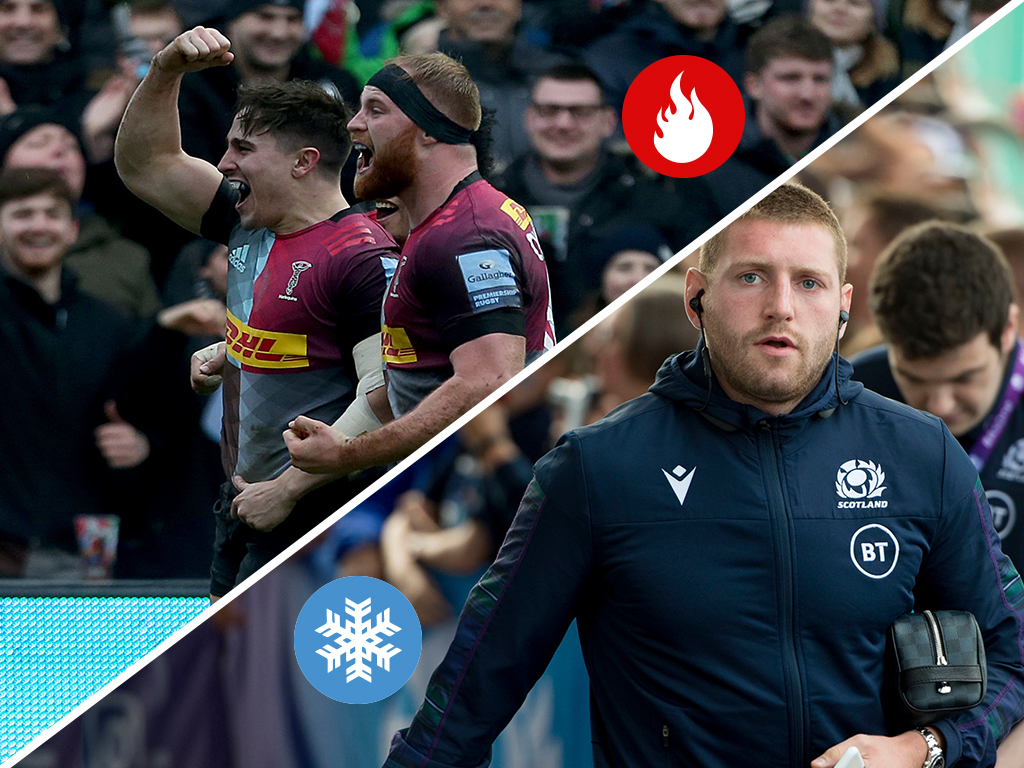 London Irish: The Premiership’s newly promoted outfit delivered an impressive performance against high-riding Northampton Saints as they stunned Chris Boyd’s charges when they notched a 20-16 victory at Franklin’s Gardens on Friday night. In a closely-fought battle, the Exiles were on the back foot for most of the match but were given a shot in the arm when Northampton lock Api Ratuniyarawa was red carded in the 50th minute. At the time, Saints were leading 13-8 and even though they added a penalty shortly afterwards, the visitors finished stronger and late tries from Franco van der Merwe and Dave Porecki in the game’s dying moments sealed a memorable win.

New Zealand Sevens: It was a double celebration for the All Blacks Sevens programme as both their Men’s and Women’s teams were successful in their respective tournaments at the Hamilton leg of World Rugby’s Sevens Series at the weekend. Clark Laidlaw’s Men’s team won all their matches at the competition, which is New Zealand’s first victory on home soil since they won the Wellington Sevens in 2016, and clinched the Hamilton Sevens by defeating France 27-5 in the final. Meanwhile, their female counterparts also went through the tournament without losing a match and they proved too strong for Canada in their final, winning 24-7, on a superb weekend for the country.

Nathan Hughes: The discarded England back-row came to the fore with a strong all-round performance as Bristol Bears ended a four-match winless streak by beating Gloucester 34-16 at Ashton Gate on Saturday. Although he did not cross the whitewash, Hughes was excellent on attack as he crossed the gainline at will and eventually gained 109 attacking metres, which was more than any other player involved in the match. The metres came via 18 carries and included three clean breaks as well as eight defenders beaten. He also impressed on defence with seven tackles.

Rhyno Smith: The full-back was the Cheetahs’ hero in a tightly contested PRO14 encounter against a spirited Southern Kings side in Port Elizabeth on Saturday. With the South African derby in its closing stages, and the Kings holding a 30-17 lead, the Cheetahs needed some magic if they wanted to be victorious. Smith provided just that as he crossed for two converted tries inside the last five minutes which clinched a stunning 31-30 victory for the men from Bloemfontein. Those two tries capped a fine performance from the 26-year-old, who finished with a match-high 107 metres gained on attack from 12 runs which included two clean breaks, four defenders beaten and an offload.

80' | Incredible kick by Ruan Pienaar and what a JUMP by Rhyno Smith.

Harlequins: Paul Gustard’s men started the weekend in ninth position on the Premiership table but after securing a 41-14 bonus-point triumph over Championship-bound Saracens, they are now in contention for a spot in the play-offs as they moved up to sixth place in the standings. Quins were full value for their win as they were the dominant side for most of the match with their number eight, nine and 10 – Alex Dombrandt, Danny Care and Marcus Smith – leading the way and the result was Saracens’ biggest loss in four years. Dombrandt, like the aforementioned Bristol Bear, Hughes, most definitely sent a message to England head coach Eddie Jones with another fine performance.

"I saw the England squad…what will be will be, and I've got to focus here."

Should Marcus Smith have been called up?🤔

After a spellbinding performance in a huge 41-14 win over Saracens…many will think so!

Finn Russell: The Racing 92 and Scotland fly-half hit the headlines for the wrong reasons last week when he was sent home from his squad’s training camp in Edinburgh ahead of their Six Nations opener against Ireland, due to a breach of discipline. Russell will now miss Saturday’s fixture in Dublin after allegedly missing training due to a late-night drinking session. His absence will be a setback for Scotland as he is one of the world’s best number 10s and it’s uncertain whether he will be available for selection for his country’s second match, against England, at Murrayfield on February 8. The 27-year-old’s suspension did not seem to faze him, however, as he turned out for Racing in their 27-0 Top 14 win over Castres at Stade Pierre Fabre and was in a celebratory mood with his team-mates afterwards.

Ben Meehan and refereeing inconsistencies at Franklin’s Gardens: While Northampton second-row Api Ratuniyarawa was red carded after a head-high challenge, we can forgive him as the decision seemed harsh. Granted, referee Tom Foley was following protocol but it was later in the game when Foley maybe should rethink his wording in the future. With just over a minute remaining when London Irish scored a key late try, Foley told Stephen Myler that if he took all the allotted time with his conversion the game would be over, which hasn’t gone down well as one would imagine. Earlier in the match, Exiles half-back Meehan lost his cool with a baffling tackle on opposite number Cobus Reinach, which saw a penalty reversed on the Northampton five-metre line and the former sent to the sin-bin. Fortunately for the Australian it didn’t come back to haunt his side as Irish’s superb away win spared his blushes.

The right result in the end with @LiRFC getting the win at @SaintsRugby. Not a great evening for Tom Foley in terms of consistency or on how to finish a game…. pic.twitter.com/i8W6V85g29

Castres: The Mauricio Reggiardo-coached outfit has found the going tough in the Top 14 this year and they looked like a pale shadow of the side which were crowned champions in that competition as recently as the 2017/18 season. On Saturday, they played host to Racing 92 and incredibly failed to trouble the scorers as the Parisian team ran out 27-0 winners. That leaves Castres in a precarious position, with 23 points amassed from the 14 matches played thus far. They currently sit in 12th position in the standings, just three points above bottom-placed Stade Français.

South Africa Sevens: The Blitzboks headed into the Hamilton Sevens in a confident mood after lifting the Dubai trophy and then finishing as runners-up in their home tournament, in Cape Town, last month. But they failed to live up to their usual high standards last weekend as they failed to reach the Cup semi-finals after suffering defeats to England and Kenya in the pool phase of the competition. That meant they were involved in the ninth place play-off with Fiji but, once again, Neil Powell’s troops failed to impress as the Pacific Islanders claimed a 12-5 victory.

Blitzboks not a happy group after poor performances in Hamilton. https://t.co/kKse799B94 pic.twitter.com/O4quA8FlgQ