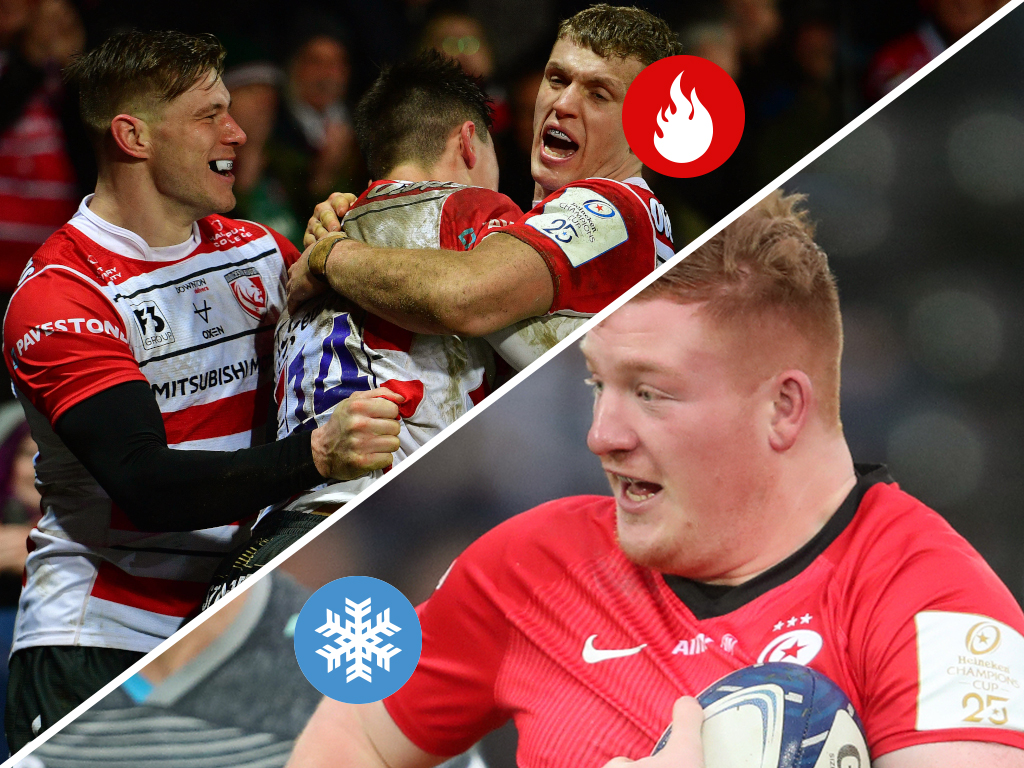 Alex Dombrandt: With Eddie Jones watching from the stands, the 22-year-old gave the England head coach a timely reminder of his abilities with a strong all-round performance in Harlequins’ 25-19 triumph over Bath in their Pool 3 Champions Cup encounter at the Recreation Ground on Friday. Dombrandt was at the forefront of Quins’ attacking efforts with a match-high 85 metres gained from 11 carries which included a clean break, one defender beaten and a deserved try. The number eight also shone on defence and eventually completed 13 tackles, which makes it even more odd that he has not played much for the Londoners over recent weeks.

The break from @AaronMorris15 🤜
The offload from the floor 🙌🏉
And the speed to finish from @Alex_dombrandt 🔥@Harlequins sliced through @bathrugby last night, how would you rate their display? 🤔#HeinekenChampionsCup pic.twitter.com/L7CqAXf6Ne

Clermont Auvergne: Produced a good performance to defeat an in-form Ulster 29-13 and move to the top of Pool 3, thus securing their passage into the next round. The Northern Irish province gave them a scare, particularly in the first half, but the French outfit asserted their authority in the second period and deservedly came away with a win. Led by George Moala, Alexandre Fischer and Paul Jedrasiak, Clermont physically dominated their opponents after the break and once again reached the knockout stages of Europe’s top club competition.

That is classic Clermont 💙💛

Backs and forwards involved in a beautiful flowing move and the French side have booked their place in the last eight!#HeinekenChampionsCup pic.twitter.com/6mrA6gGOPk

Gloucester’s talented wings: There has been much fanfare over Welsh starlet Louis Rees-Zammit, and rightly so, but Ollie Thorley has also produced several outstanding performances recently. Both were heavily involved as the Cherry and Whites defeated Montpellier 29-6 on Saturday. Rees-Zammit scored one try and set up another, while Thorley made a staggering 147 metres with ball in hand. Despite the difficult conditions, Gloucester consistently managed to get the ball into their wings’ hands and it paid dividends as they came away with a dominant win.

Louis Rees-Zammit is a GAMECHANGER 🔥

A brilliant break and sublime offload has @gloucesterrugby in front!

Challenge Cup qualifiers: It’s hats off to Bristol Bears, Bordeaux-Begles, Toulon and Leicester Tigers, who have all secured their quarter-final place in the Challenge Cup after picking up wins over Brive, Edinburgh, Scarlets and Cardiff Blues respectively. The first three of these were bonus-point successes as they cruised to the knockouts in style on Saturday while on Sunday Leicester got the job done against strong opposition thanks, in part, to George Ford’s two drop-goals. This coming weekend it will about securing those all-important seeding spots.

A disappointing night for @scarlets_rugby 😳

But an emphatic win for @RCTofficiel means they've secured their spot in the final 8️⃣ 👏#ChallengeCupRugby pic.twitter.com/tDNpPj6ydF

Heroes, little and large: Two players of very different build stood out on Sunday as first it was Northampton winger Taqele Naiyaravoro impressing while his team struggled against Benetton. The giant finisher swatted the Italian defenders off like flies at times at Franklin’s Gardens and deservedly claimed the man-of-the-match gong. Later we were hugely impressed by Racing 92 scrum-half Teddy Iribaren as his goal-kicking and game management was topped off by an outstanding long pass that has to be seen to be believed. Watch the highlights.

Just give him the ball 💥

Rhys Carre: The Wales international front-row made a return to his birth country but he will want to forget it in a hurry as he hardly worked up a sweat before referee Pascal Gaüzère gave him his marching orders for a no-arms tackle to the face of Ospreys full-back Dan Evans after just five minutes. Carre’s hit was dangerous, uncontrolled and reckless and although Saracens showed great resolve to hold off their opponents, his indiscretion placed them under severe pressure with only two late Manu Vunipola penalties sealing their win.

Here's the incident that saw the Saracens men given a red card for a shoulder to the head after less than 5 minutes!#OSPvSAR #HeinekenChampionsCup #VMTVRugby pic.twitter.com/6YzCbquvoZ

Valery Morozov: The footage was damning for the Sale Sharks prop as he was given his marching orders against La Rochelle in their Champions Cup fixture on Friday. Morozov’s needless act at a ruck came on 65 minutes when Sale were 25-16 down to the Frenchmen and with the English side only finishing seven points adrift, one wonders how they would have fared with 15 men on the field. No doubt Steve Diamond was livid with him.

Bath: The West Country outfit’s poor Champions Cup form continued courtesy of their home defeat to Harlequins, which means Stuart Hooper’s troops have lost all five of their matches in the tournament so far this season. Bath’s final match of the pool phase of the competition is away to Ulster, who are in second position in Pool 3, and another defeat against the Northern Irish province will condemn the Premiership side to their worst ever campaign in their 16th season of European Cup rugby.

The full time scores are in. Our young men gained invaluable experience on the field today and they will take those learnings into their fixture against @Harlequins next week. pic.twitter.com/VTZuNWUHH6

Ospreys: Carre’s early dismissal gave the Welsh region a glimmer of hope against their more fancied opponents but despite playing with a one-man advantage for 75 minutes, they could not get the better of Sarries. To their credit, Ospreys were competitive throughout and outscored their opponents by two tries to one but, in the end, that was not enough to secure the result and they have now lost all five of their Champions Cup matches. They face a daunting task against Munster in their final pool match at Thomond Park on Sunday.

💫 @Saracens live to fight another day 🥊

Northampton: Some may view this as strange but try telling Saints director of rugby Chris Boyd that we’ve been harsh in our placement. Boyd was visibly upset and frustrated with his team’s performance against Benetton as it was a showing littered with errors, notably handling and at the line-out. Yes, Benetton are a strong side these days but, as Boyd stated, he warned his charges during the week of the threat they pose and traps they could draw Saints into. Clearly the boss feels they did not take this advice and he’ll expect much better moving forward.