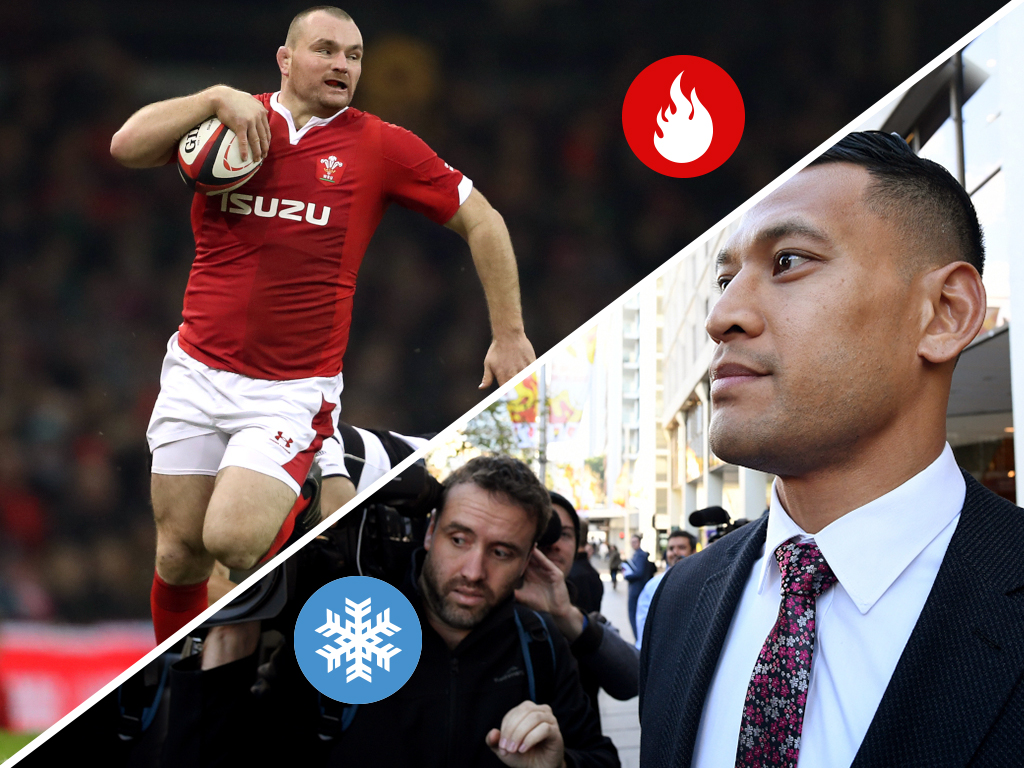 Wales v Barbarians: While the regions may regret the decision to play this match, with only Cardiff Blues emerging victorious at the weekend, it was a particularly poignant and high quality contest which ended 43-33 in the Welshmen’s favour. The hosts were the better side for much of it and opened up a 33-7 gap at one stage, but the Baa-Baas came back into the encounter and put Wayne Pivac’s side under pressure. However, the result was almost secondary to all the great subplots which surrounded the encounter, with Rory Best playing his final professional game, Warren Gatland returning to the Principality Stadium as Barbarians coach and Pivac taking charge of his first Wales match. Schalk Brits also sprinkled his own magic dust on proceedings late on to add the gloss on a fine afternoon in Cardiff.

There was a touching show of gratitude from the fans in Cardiff today for one of rugby's good guys, @RoryBest2. pic.twitter.com/lOJm29b9q0

Northampton Saints: They are playing some outstanding rugby at the moment and produced an excellent display to thrash their arch-rivals Leicester. The Saints were dealt a blow before kick-off with top-class internationals Owen Franks, Dan Biggar and Courtney Lawes all withdrawing, but they showed what good coaching can do. Their replacements slotted in seamlessly, with young fly-half James Grayson particularly impressive, and they eventually secured a 36-13 triumph at Franklin’s Gardens.

Whipping the ball wide, direct and incisive from phenomenal new boy Matt Proctor and then the @TaqeleN truck took it from there 🎳

Zebre: Opened their account for the season in spectacular fashion as they stunned the Dragons 39-12 at Rodney Parade. It was a weakened team fielded by the hosts, who had their internationals away with Wales, but it was still a mightily impressive display by the Italians. They dominated the contest and scored five tries through Jamie Elliott, Edoardo Padovani, Tommaso Boni, Charlie Walker and Maxime Mbanda to claim the win and end that horror run.

A slicing break 🤜
A lovely little dink through 👟🏉
A chase-down and THE SCORE 🙌@ZebreRugby strike first, could they sneak an away win at @dragonsrugby today? 👀#GuinnessPRO14 #DRAvZEB
🇬🇧 Watch Live Now on @PremierSportsTV & @S4C
🇮🇪 Watch Live Now on @eirSport pic.twitter.com/Po2M9QIw4J

Cardiff Blues’ late show: Benetton are an incredibly difficult team to overcome nowadays, especially at home, and the Welsh region showed plenty of resilience, as well as no little skill, to snatch the victory at the death. The Blues were 11 points in arrears going into the final quarter but, following Alun Lawrence’s try which reduced the gap, Rey Lee-Lo broke down the left and off-loaded for Jason Harries to cross the whitewash and leave the hosts deflated.

😱 CARDIFF BLUES WIN IT AT THE DEATH!

🏉 Having trailed for the majority of the match, a last gasp try from Jason Harries broke Benetton hearts and will send the visitors home happy pic.twitter.com/OuMv1Iawyq

Semi Radradra and Santiago Cordero: Bordeaux-Begles have enjoyed an outstanding start to the campaign in the Top 14 and they produced another excellent display to overcome an improving Racing 92 side 34-30. Although they competed well up front, their brilliance often came from the aforementioned star duo, who caused constant problems for the Parisians. Cordero’s superb footwork and balance regularly created opportunities, while Radradra was at his typically brilliant best to help UBB to a priceless win away from home.

Jean-Luc du Preez: We just can’t buy Steve Diamond’s assertion that it was an “innocuous” incident which left Worcester lock Graham Kitchener needing treatment. The Sale Sharks back five forward was correctly red carded for leading with his shoulder into the head of the Warriors second-row and it cost the ambitious Greater Manchester club the contest. At the time, they were leading 10-3 but, following Du Preez’s sending off, they succumbed 20-13 to the Midlands outfit. It may not have been malicious but it was reckless and the 24-year-old will surely spend a few weeks on the sidelines.

Wasps and Leicester: Two great clubs of the English game are struggling at the wrong end of the table after extremely poor openings to the campaign. Both have just one victory to their name and succumbed to heavy defeats at the weekend. While Dai Young’s men were expected to struggle against Exeter Chiefs, the Tigers were looking for a response after their international stars returned, but they were utterly woeful in going down to Northampton. The clubs have 16 Premiership titles between them, but one of them could well be playing in the Championship next year if their awful form continues.

Said it before about @LeicesterTigers, it’s not Geordan Murphy who is the issue at the club. Yes he’s a good mate of mine but it’s the people above him who’ve made all the hiring and firing decisions/mistakes and the last 5 years recruitment & planning who are the problem…

Israel Folau increasing his compensation claim: The majority of people in Australia are scratching their heads over Folau’s decision to seek an extra AUS$4million in compensation because of, in part, his claim that he could have become the Wallabies captain. For one, the sacked Australia full-back has never done that role in any team he has played in, while the current skipper Michael Hooper has signed a deal to stay with Rugby Australia until at least 2023. That, combined with his recent comments which said the devastating bushfires were God’s way of punishing the country’s decision to legalise same-sex marriage, shows that Folau has become a rather unedifying individual.

And so it goes on. For what it's worth, there was never a challenge to Michael Hooper's captaincy that I was aware of. He had the coach, and the dressing room.
Israel Folau in new $14m compensation claim against Rugby Australia https://t.co/RZ6wRqELa7 via @smh

Ospreys: It has been an absolute PR disaster for the Welsh region over the past week, who, for a long time, did not truly confirm the situation regarding Allen Clarke. It was reported last Tuesday that the Irishman had been sacked as head coach, only for the region to not confirm the news, nor give an explanation. That led to an awkward day for coach Richie Pugh and back James Hook, who attended the ‘official’ PRO14 launch, but were not allowed to answer questions on the subject, even though they were constantly probed. The Ospreys then tweeted a very vague update, which only added to the confusion, before chairman Rob Davies finally gave a true indication on what was going on, stating legally they can’t delve too much into the matter. That’s fine, and people understand these legal ramifications, but to keep everyone in the dark was just wrong. It also didn’t help that managing director Andrew Millward criticised the media for merely doing their job.

The Ospreys' Andrew Millward on PRO14 event: "It was specifically for a coach and a player, not a management, and for that to be hijacked in the way it was by you guys (the media) because you wanted a piece of information, I find that a bit disappointing."

We are currently in discussion with Allen Clarke and we hope to have a resolution shortly. We understand the frustration of supporters but we would appreciate your patience.

Stade Francais: The Paris-based outfit’s woeful start to the season continued at the weekend when they suffered a 26-21 defeat to Brive at Stade Amédée-Domenech. That result leaves Stade firmly rooted to the foot of the Top 14 table, with just 10 points accumulated from as many matches played and six points adrift of their nearest rivals Agen. With the action in Europe’s cup competitions taking place over the next two weekends, the Parisians will be hoping to strike some winning form ahead of their next league match, against Pau at Stade Jean-Bouin on December 21.