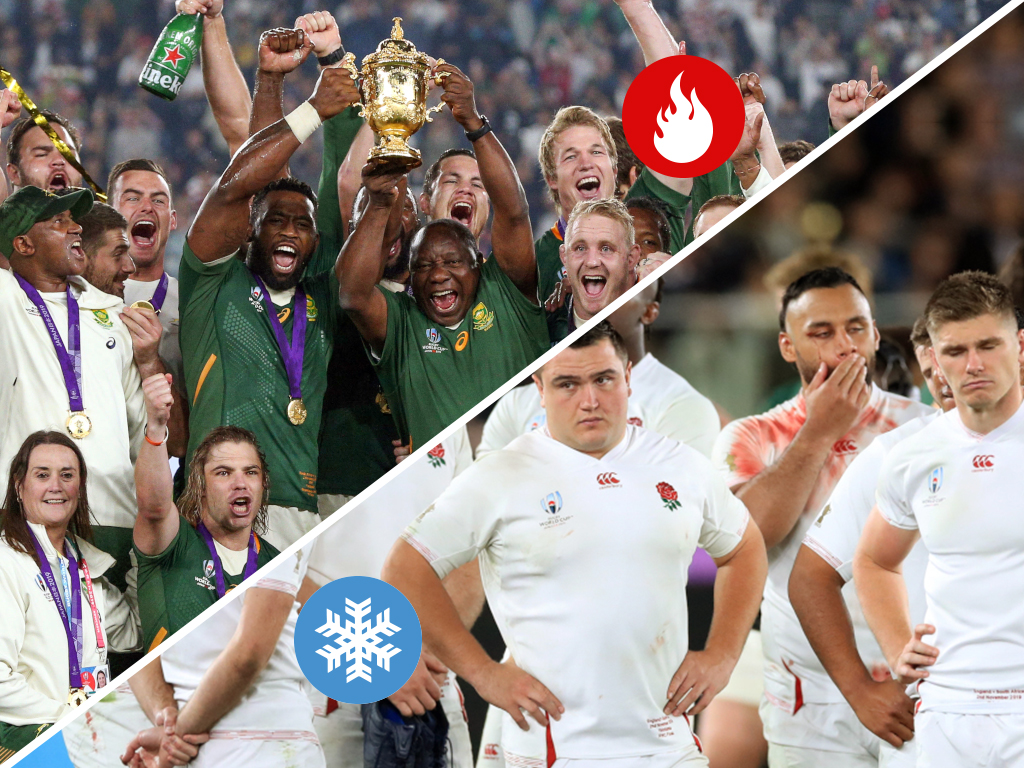 South Africa: Despite coming into the Rugby World Cup Final as the underdogs, the Springboks proved too strong for England as they dominated that encounter from the outset and grew stronger as the match progressed. The Boks dominated most facets of play and were worthy winners in the end. Handre Pollard set up the win with fine goalkicking and finished with a 22-point haul while Makazole Mapimpi and Cheslin Kolbe sealed their side’s win with brilliant tries in the game’s latter stages. Their World Cup success and Rugby Championship triumph resulted in them winning the Team of the Year award at the World Rugby Awards show in Tokyo on Sunday.

Rassie Erasmus: Although it was a great team effort, the Springbok head coach deserves to be singled out for special praise for masterminding a fine victory against a very good England team. Erasmus’ tactical acumen is no mean feat as he got the better of England boss Eddie Jones, who is himself a shrewd operator. It must also be remembered that Erasmus took over the reins as Bok coach when the team were in the doldrums and the way he has revived their fortunes is a remarkable and noteworthy achievement. He was rewarded at the World Rugby Awards when he was named as the Coach of the Year.

It's a great love story 😍@Springboks Rassie Erasmus and the #WebbEllisCup

Pieter-Steph du Toit: Has consistently been one of South Africa’s best players over the past few years, earning the SA Rugby Player of the Year on two occasions, but the flanker has now been recognised on a global scale. Du Toit was utterly magnificently during the Rugby World Cup, particularly during the knockout stages, as the Springboks claimed the title and was deservedly name World Rugby Men’s Player of the Year for 2019.

Japan: What a wonderful tournament they have hosted. The competition captured the hearts and minds of a nation, while the performances of the Brave Blossoms provided a huge boost to the World Cup as millions tuned in to see the Japanese reach the quarter-finals. Although there were doubts leading in and the cancellation of three matches was a negative, it didn’t outweigh the many positives. It was organised superbly and there were full stadiums at pretty much ever match, which helped create a wonderful atmosphere.

"It's important that we build on the legacy of this Rugby World Cup"@chrissymacCNN speaks to World Rugby Chairman @BillBeaumont about the impact of the Rugby World Cup on Japan #WorldRugbyAwards pic.twitter.com/UsgLDEojZp

All Blacks’ departing players: In what became a disappointing tournament for New Zealand following their semi-final defeat, it ended on a high after they beat Wales in the third place play-off. Steve Hansen, who is also leaving his role as head coach, selected their retiring internationals in the XV and they played superbly well. One of the great back three players, Ben Smith, starred with two tries, while Sonny Bill Williams, Ryan Crotty and Kieran Read all featured prominently. An ideal way to finish their All Blacks careers and we wish them well for the future.

Will take some time for Tomos Williams to get Ben Smith’s handprint off his face #NZLvWAL #RWC2019 pic.twitter.com/dVk3jtIzxv

Irish provinces: All four teams have enjoyed a remarkable start to the PRO14 campaign with them occupying the top two places in each of the conferences. Defending champions Leinster have been especially impressive, particularly since they are hardest hit by the World Cup, and they remain unbeaten following five successive victories. Munster, Ulster and Connacht are not far behind having won four of their five matches and, as a result, it will certainly be difficult to prize the trophy away from Ireland this season.

👏 A second try of the night for Dave Kearney and scintillating rugby from Leinster!

England: First of all, they’ve had a superb tournament, including defeating defending champions New Zealand with a wonderful display, but they just failed to fire in the showpiece event. While South Africa were composed and assured in what they were trying to do, the Red Rose looked nervous and simply made too many mistakes. Although they briefly jolted into life in the first half, the Springboks got back on the front foot and regained their lead. With the Red Rose still in arrears midway through the second period, they started to force the play, leading to further errors, and a clinical outfit capitalised to inflict a disappointing defeat on Eddie Jones’ men.

England lose possession in the tackle. It's fed out wide to the magician Kolbe who waltzes through the defence#ITVRugby #RWCFinal #ENGvRSA pic.twitter.com/Fsqa2fTikO

Harlequins: It was quite the chastening evening on Friday for the Londoners, who were completely dominated by early Premiership leaders Northampton Saints. On paper, it should have been a tight game but the visitors were comprehensively outplayed as they succumbed to their second defeat of the campaign. Paul Gustard had a positive first season in charge at the Twickenham Stoop but they will need a significant improvement if this ambitious outfit are to challenge for honours.

🃏 An improved second half but it wasn't our night.#COYQ | #NORvHAR pic.twitter.com/AGO6n6gnaQ

Southern Kings and Zebre: These two teams have made horrible starts to their PRO14 campaigns and are the only sides yet to register victories in that competition after five rounds of matches. The Kings hardly put up a fight against Glasgow Warriors and suffered a humiliating 50-0 defeat to last year’s beaten finalists at Scotstoun on Friday. Meanwhile, Zebre fared little better and despite scoring early on against Ulster, they were under the cosh for the rest of that match and eventually lost 22-7 at Kingspan Stadium.

Certainly not the result we were looking for last night.
A dominant Glasgow Warriors outfit, rejuvenated by the return of their internationals from the Rugby World Cup, powered their way to a comfortable victory.
Some work to do for us ahead of our last tour match next week. pic.twitter.com/6PrBTy0itM

PRO14 disparity: While you rightly laud the quality and performances of the Irish provinces, they are, perhaps with the exception of the Cheetahs, Scarlets and Edinburgh, out on their own. No one else is really close to challenging those four sides and it’s rather concerning for the rest of the tournament. Although the returning internationals may well change that, it would be dissatisfactory from a competition standpoint should four of the six play-off places be taken by the Irishmen.

For the second weekend running only one of the four Welsh regions was successful. With Cardiff Blues well beaten at home by Munster tonight, it means only the Scarlets won, and that result was pretty close