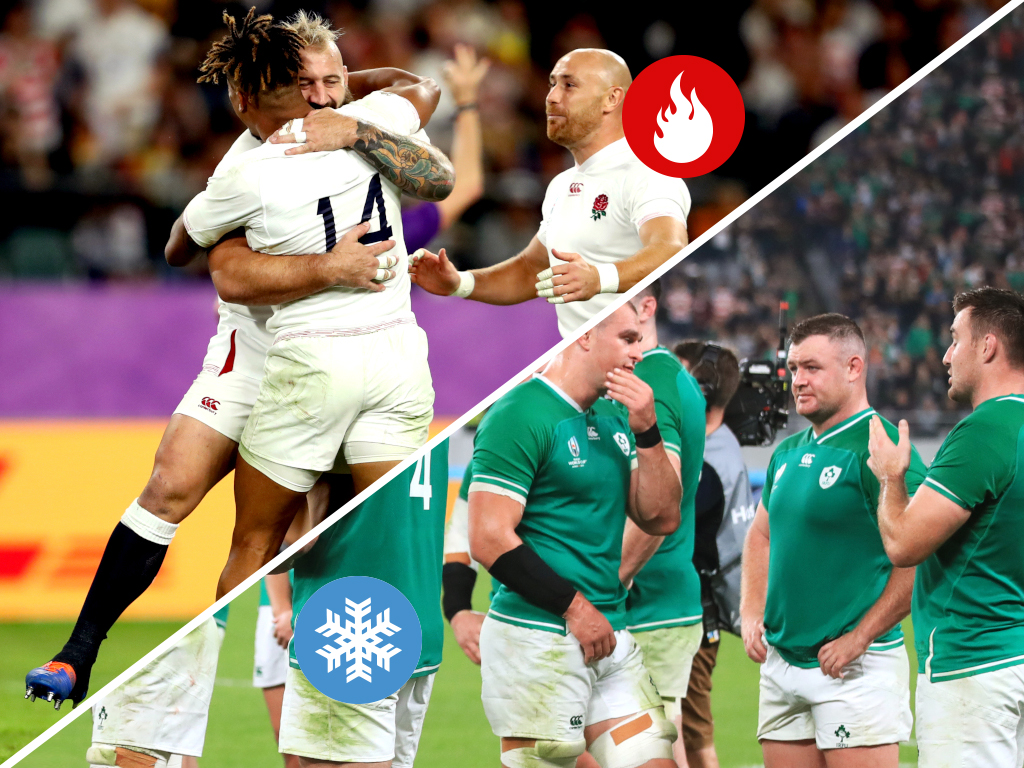 England: Eddie Jones’ troops delivered a clinical performance in the opening Rugby World Cup quarter-final against Australia and although the Wallabies came out firing during the game’s early stages, they weathered that storm before taking control of proceedings. Two first half tries from Jonny May set them up nicely and although Australia struck back with a five-pointer from Marika Koroibete, to narrow the gap to one point, England did not panic and were rewarded with further tries from Kyle Sinckler and Anthony Watson while their captain, Owen Farrell, kept the scoreboard ticking with accurate goal-kicking which helped them cruise to a comfortable 40-16 victory.

New Zealand: New Zealand made a statement of intent as they were in a rampant mood in their quarter-final against Ireland before eventually sealing their place in the semi-finals – and a showdown with England – with a one-sided 46-14 triumph. The All Blacks showed why they are back-to-back world champions as they dominated most facets of play from start to finish and ran in seven tries to Ireland’s two. Aaron Smith was particularly impressive on attack and was rewarded with two tries while dual playmakers Beauden Barrett and Richie Mo’unga also shone and Barrett walked off with the official man-of-the-match award.

Gloucester, Northampton and London Irish: These sides have started the season in superb fashion, gaining excellent away victories over Sale Sharks, Saracens and Wasps respectively. While the Saints took advantage of the World Cup to defeat a severely depleted Sarries side, it is still a mightily tough ask to beat a team with such outstanding depth. As for the Cherry and Whites, their feat was even more impressive with Sale fancied to be a threat for the title, and they showed plenty of resolve to come from 13-0 down and claim a 18-16 triumph. However, arguably the biggest result came on Sunday when newly-promoted London Irish beat Wasps 29-26. The Exiles have invested heavily ahead of their return to England’s top-flight but a number of those top internationals have not yet joined, meaning it was a mix and match outfit. Those players which featured on Sunday showed plenty of quality, though, and it suggests that they have the squad to steer clear of relegation.

From back-to-front in no time ↔️

Emoni Narawa: The Blues seem to have snapped up a quality player in full-back Narawa, who was excellent for Bay of Plenty in their Mitre 10 Cup semi-final. The lethal youngster was a constant threat with ball in hand against Manawatu as the Steamers booked their place in the Championship final where they will meet Hawke’s Bay. Narawa does have big Super Rugby shoes to fill as a replacement for now Worcester Warriors back Melani Nanai but on this form he looks quite a prospect.

Who’s exited to see him in Blue for 2020??#BluesAllDay #WhateverItTakes pic.twitter.com/SAcKidHmT1

Sebastien Vahaamahina: The France second-row had a moment of madness during his side’s narrow 20-19 defeat to Wales in Sunday’s quarter-final in Oita. With his team in control of proceedings and holding a 19-10 lead, Vahaamahina committed an inexcusable act when he elbowed Aaron Wainwright in his face at a maul. With several television cameras in the stadium, that was not the brightest thing to do and referee Jaco Peyper had no hesitation in issuing a red card for the offence.

Ireland: Yet another post-World Cup inquest awaits for the Irishmen, who endured a pretty woeful tournament. Joe Schmidt’s men were expected to go well in Japan but, following a 19-12 defeat to the hosts in the pool stages, they had to play defending champions New Zealand and were comprehensively outplayed. They are still yet to go past the quarter-finals and more frustratingly the Emerald Isle rarely get close. Apart from in 1991, where they narrowly succumbed to Australia 19-18, heavy defeat has followed heavy defeat in their last-eight contests. Even in 2011, when Wales overcame the Irish 22-10, they didn’t play anywhere near potential and were eventually ground down by Warren Gatland’s men. Although Six Nations and Grand Slam success should be treasured, you wonder whether peaking at the global tournament has ever been a priority.

Michael Cheika and Australia: The Wallabies committed rugby suicide on Saturday by effectively handing a very well-drilled England team the victory through a series of strange decisions. Yes, Australia needed to do something different to upset an excellent Red Rose side, but to consistently run the ball from their own 22 was utterly stupid. That may have been a viable tactic 15 years ago, but defences are too organised nowadays for it to be successful at the top level. Cheika then defended their game plan by stating: “That is the way we play footy. I am not going to a kick-and-defend game. Call me naive but that’s not what I am doing. I would rather win playing our way, that’s the way Aussies want us to play.” Well…New Zealand don’t play ‘kick-and-defend’ but they certainly don’t run it from everywhere and hand the initiative to the opposition.

Michael Cheika won't be seeking an extension in 2020, stepping aside as #Wallabies Coach.

Quade Cooper: On the subject of Cheika’s announcement that he is stepping down from his position after that loss to England, most people wished him well with his future endeavours. Cooper was not amongst those, however, and the mercurial Wallaby fly-half showed his true feelings about his former coach’s decision with this post on social media. While we appreciate the pivot’s frustrations, it was all a bit churlish from the Rebels man.

If he actually cared about Aus rugby he would have done it a while ago..

Ben Skeen: The New Zealand television match official had a moment to forget during the quarter-final between England and Australia when he missed a clear forward pass from Wallabies captain Michael Hooper to Koroibete, who set off on a barnstorming run before crossing England’s try-line. French referee Jerome Garcès thought he had seen the forward pass and went upstairs to Skeen, who said there was nothing wrong with Hooper’s pass. Thankfully, Garcès saw things differently and ruled that the offence occurred while Skeen was left with egg on his face.