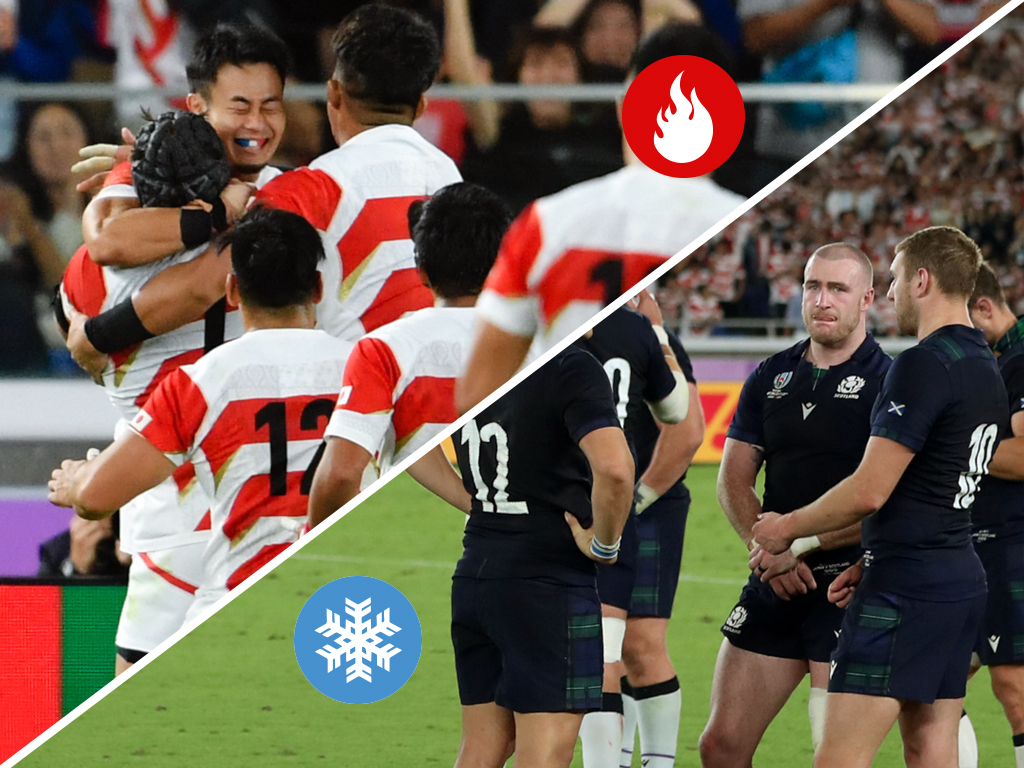 Japan: Another stunning performance from the Brave Blossoms, who qualified for the quarter-finals for the first time ever. They were superb in the first half against Scotland, scoring three tries, before Kenki Fukuoka went over to increase their buffer. Although the Scots hit back and gave them a fright going into the final quarter, the Japanese deservedly held on and set up a game against South Africa in the last-eight. Credit must also go to those that remarkably got the game on after the country suffered its worst storm in 60 years, while the crowd that attended were once again utterly magnificent.

Wales v Fiji: The Welsh game against Australia was the best of the pool stages but this was not far behind as the Pacific Islanders put significant pressure on their opponents. Wings Semi Radradra and Josua Tuisova were simply outstanding as they opened up a 10-0 buffer, but credit must go to Warren Gatland’s outfit, who hit back and ended up taking the contest 29-17. The better team on the day won but they were given a mighty scare from the Fijians.

He’s only a Semi Radradra… imagine how deadly a whole one would be… #RWC2019 #WALvFIJ pic.twitter.com/KXLz49APGl

Juan Cruz Mallia: One positive for Argentina from their disappointing World Cup campaign is that they have a number of young players coming through and Mallia displayed his talent in their victory over the USA. The centre, who can also play in a variety of other positions across the backline, was outstanding on Wednesday, scoring two tries, setting up a couple more and running for a superb 156 metres in total. The 23-year-old also made 11 tackles in defence in what was a complete performance from the talented Jaguares back. He looks quite a prospect.

Marika Koroibete: While Australia struggled to get going before they ground out a 27-8 victory over Georgia in their final pool match, Koroibete did his own thing as he delivered an excellent attacking performance in Shizuoka. The Wallaby flyer proved difficult to stop, gaining a match-high 108 metres from 10 runs with 10 defenders beaten and three clean breaks. One of those breaks was a brilliant solo effort which was started in his own half and he was rewarded with a deserved try.

Leinster, Cheetahs and Scarlets: After three rounds of action, these teams are the only unbeaten sides left in the competition and they all registered impressive home victories at the weekend. The Irish province and South African outfit beat Edinburgh and Munster respectively and are sitting pretty at the top of the Conference A table with 15 points apiece. Meanwhile, the Welsh region are Pool B’s pacesetters with 13 points after their convincing win over Zebre.

🔥 @scarlets_rugby wasting no time in getting points on the board today as they lead @ZebreRugby 12-0 early on!

🏉 Kieran Hardy got over the try line for the home team inside 90 seconds with this breakaway effort, and Josh Macleod has added five more points since pic.twitter.com/OSblPCgkDC

Lyon: They are certainly taking advantage of the World Cup period after notching their seventh consecutive victory in the Top 14. Pierre Mignoni’s men comfortably defeated Pau 27-8 on Saturday to keep them at the summit. Only Bordeaux-Begles have really got close to Lyon, succumbing 25-23 at the Matmut Stadium de Gerland just over a week ago, but last season’s semi-finalists have scored the second most points, conceded the fewest and look set for another tilt at the title.

World Rugby: First of all, there are things more important than rugby when such natural disasters occur and safety is paramount, but we are staggered that proper provisions weren’t put in place. World Rugby insisted that ‘robust contingency plans’ were in the pipeline should the tournament be disrupted but that doesn’t appear to be the case. According to a report in the Guardian, the governing body’s plan was to move a game 14 miles away should Yokohama be affected which, if correct, is naïve at best, incompetent at worst. Needless to say, typhoons aren’t your average localised flooding scenarios; these are huge storms which cover vast areas, and ultimately World Rugby deserve a lot of the criticism they are receiving.

Impossible? No. This is the narrative being pumped out of World Rugby. This WC was 10 years in the planning . Proper planning would have included contingencies for all circumstances. Moving games to safer parts of the country, or delaying by a day, was not a Herculean task. https://t.co/lkFGfrzHvx

Scotland: Much of the debate leading into the game was whether the encounter was even going to go ahead, leading to legal threats and frustration from the Scottish side, but perhaps their whole focus should have been on the field. As brilliant as Japan were, Scotland were poor before the interval and effectively saw their hopes of qualifying ended after 42 minutes, when Kenki Fukuoka’s try saw the Brave Blossoms go 28-7 up. Scotland’s resilience was impressive while they displayed no little skill in getting back into the contest, but ultimately it was a pretty abysmal World Cup campaign.

USA: There was plenty of hype about the Eagles’ chances ahead of the Rugby World Cup and although it was unlikely that they would qualify for the play-offs from a group which included heavyweights like England, France and Argentina, they were expected to be more competitive. But that was not to be as Gary Gold’s charges lost their three opening games to the aforementioned teams before suffering the same fate in their final pool match against Tonga on Sunday. That meant the Eagles finished at the bottom of Pool C without a single point gained from their four matches played.

Thomas Ramos’ Toulouse selection: It could only happen in French rugby. For those that don’t know, full-back Ramos was sent home last week after supposedly suffering a tournament-ending ankle injury, only to be included in Toulouse’s team to take on Castres on Saturday. Either the medical staff made a big mistake or there was some sort of breach of team protocol and he was ousted from the squad. The whole situation is just bizarre but, considering what has gone before in French rugby, it is not that surprising.

👀 Thomas Ramos was replaced in France's World Cup squad last week due to an ankle injury.

He's just been named to start at fullback for Toulouse against Castres in the Top 14 tomorrow. pic.twitter.com/Okt4oSSeKF