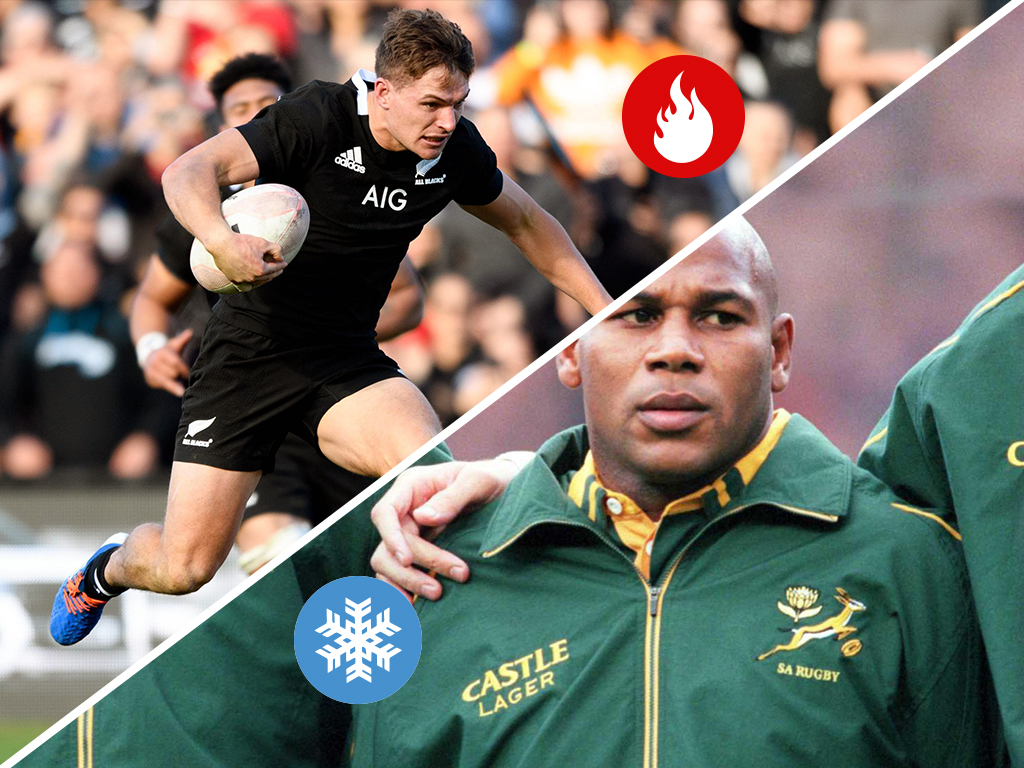 George Bridge and New Zealand: What is it about new All Black number 11s and hitting the ground running? Jonah Lomu, Julian Savea, Rieko Ioane and now Bridge is the latest enjoying a fast start to his international career and four tries against Tonga puts him at over one try per game thus far. Such a smart rugby player as he has proved for the Crusaders in recent Super Rugby seasons and his ability to be in the right place at the right time was evident again on Saturday as he was rampant at Waikato Stadium. Bridge and Reece surely have the wing spots locked up.

Makazole Mapimpi and South Africa: From a four-try day to three, Mapimpi’s year continues to impress as he caused Japan plenty of problems in Kumagaya on Friday. To win 41-7 on Japanese soil against the host nation is yet another marker thrown down by the ever-improving Springboks, who look every bit like 2019 title challengers in the upcoming Rugby World Cup. Bring on that opening meeting with the All Blacks in Yokohama City on September 21.

England’s second half: It was anything but a classic in the first half as England went into the St James’ Park changing room just nine points in front. But after the break they turned the screw and, as head coach Eddie Jones said post match, he was thrilled with his side’s ability to “problem solve”. England once again showed they have the tools to unlock defences in numerous ways, with Owen Farrell pulling the strings from 10 and later 12 beautifully. Local player Mark Wilson also impressed on the openside with 27 tackles to his name while the prop replacements, Ellis Genge and Kyle Sinckler, were a handful and gave England extra bite in the loose that was key to their attack.

David Pocock’s solid comeback: The Wallabies flanker returned to action on Saturday, after six months on the sidelines with a nagging calf injury, and did well as he captained his team to a hard-fought victory against Samoa in Sydney. The 31-year-old, who announced last week that he will retire from Test rugby after the World Cup in Japan, left the field on the hour-mark against Samoa after a solid all-round performance and Wallabies head coach Michael Cheika said he felt he could easily have lasted on the field longer than that. What a boost ahead of the World Cup.

Free State Cheetahs: Franco Smith’s troops finished their Currie Cup campaign on a high when they edged the Golden Lions 31-28 in the final in Bloemfontein at the weekend. As the scoreline suggests, it was a nailbiting affair although a fine first half effort paved the way to victory – and a sixth Currie Cup title – for the Cheetahs. They raced into a 31-7 lead at half-time – with Joseph Dweba, William Small-Smith, Clayton Blommetjies and Walt Steenkamp scoring tries while veteran Ruan Pienaar slotted 11 points thanks to four conversions and a penalty – and although their opponents launched a superb second half fightback, it wasn’t enough to wrestle the trophy from the Cheetahs.

The loss of a Springbok legend: 1995 Rugby World Cup hero Chester Williams passed away on Friday at the age of 49, rocking rugby’s family who were stunned and paid their respects wherever they could. Click here to read those tributes on Twitter. Williams was vital to the Springboks, uniting a nation in their home tournament all those years ago, and he would go on to score 14 tries in 27 appearances for his country. Such sad news. Rest in peace, Chester.

"A man who inspired a generation."
"My childhood hero 💔 I still can’t believe it."

Tonga’s hammering: Although the All Blacks deserve plenty of credit after a deserved victory, their opponents will have to plenty of soul searching to do ahead of their Rugby World Cup campaign. The Pacific Islanders were like lambs to the slaughter as they were outplayed by a country mile in every facet of play. The 92-7 scoreline tells a story and the world champions could easily have notched a century of points in Waikato had they not played the last 15 minutes with 14 players after their coach, Steve Hansen, deliberately took Ryan Crotty off without replacing him.

Lack of help for Brian Mujati: First off, an outstanding video from the former South Africa tighthead prop as he detailed his post-rugby career struggles in terms of finding suitable employment. What was concerning was a lack of insurance payout – something that has been all too often mentioned by former players – and then an apparent lack of suitable direction and help from the respective bodies. Mujati seems a hugely talented and well spoken gentleman and it was eye opening and quite frankly frightening to watch how hard players can hit the real world after retiring.

📽️ Video of the Week: Life after Rugby with Brian Mujati. 🇿🇦

This is a must watch piece from the former Bok. 👉 https://t.co/hWvT1XuKf7 pic.twitter.com/0LyV0paKpb

Japan: Although their result was not as bad as Tonga’s, there was little positive to report for the Brave Blossoms in their defeat to the Springboks and they were on the back-foot for most of that match in Kumagaya. Jamie Joseph’s charges offered little resistance to the South African onslaught and will have to go back to the drawing board ahead of their World Cup campaign in their backyard. Whispers of pool qualification look unlikely after this performance.

Ireland v Wales match: It was a great victory and a much-improved performance from the hosts, who moved to number one in the world as a result, but it’s not a match that will live long in the memory. The skill levels were not exactly high with the game far too error-ridden, while there was a distinct lack of creativity on show. The physicality, particularly from Ireland, was better but the intensity was still well below what they should be aspiring to in Japan.

Our coach. Our Captain.

Thank you Joe Schmidt & @rorybest2 for all the great days.