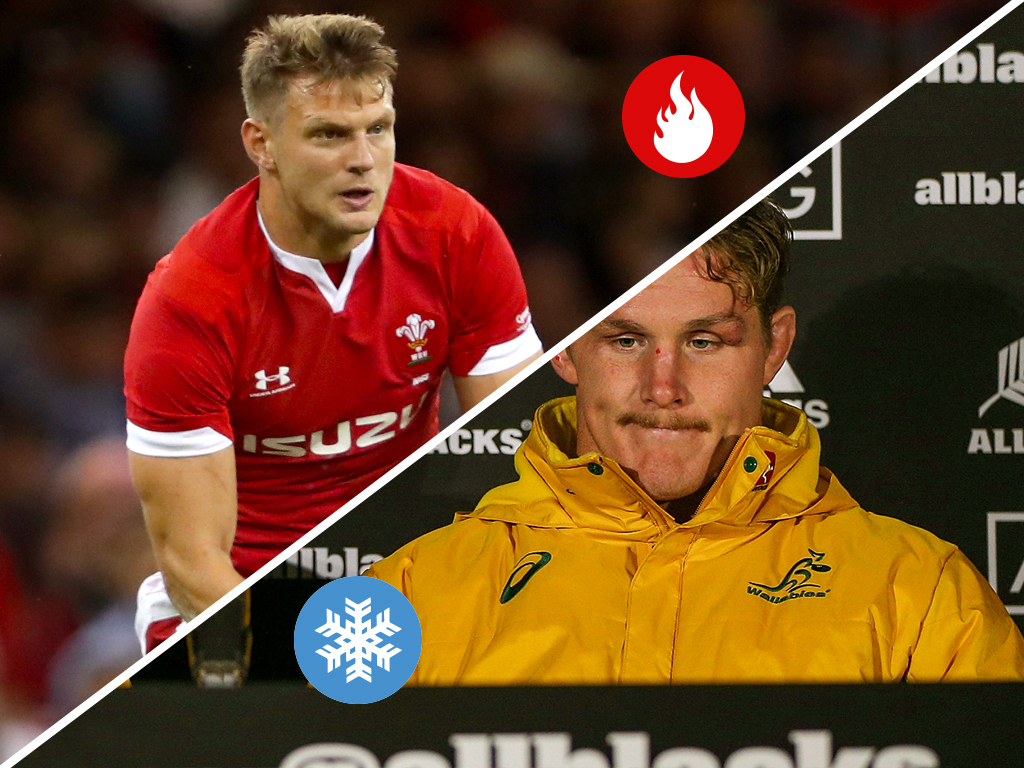 Wales and Dan Biggar: Congratulations to Warren Gatland’s men who have risen above New Zealand and into first place in the world rankings. Despite their defeat to England on the road, Wales have enjoyed a wonderful run having won 15 of their past 16 games, including their dogged 13-6 win over the Red Rose on Saturday. Particularly impressive in Cardiff was fly-half Dan Biggar, who set up the try and controlled play nicely. Biggar was criticised by Welsh legend JJ Williams during the week, but the pivot responded impressively and justifiably hit back post match.

"Thanks to JJ Williams for the extra motivation" @WelshRugbyUnion.answered their critics with victory over @EnglandRugby, says man-of-the-match Dan Biggar#C4rugby #WALvENG pic.twitter.com/3VtFbalZOf

New Zealand: Back on song. After a certain amount of criticism and questions over their form heading into the World Cup, they produced an outstanding display against Australia to retain the Bledisloe Cup. Although they have slipped behind Wales in the rankings, this was the display of a number one team. There are still a few questions, however, after seeing George Bridge and Sevu Reece both impress at Eden Park on Saturday. Steve Hansen refused to say that Rieko Ioane and Ben Smith were dropped but, after this effort, the former duo have pressed their claims.

Taniela Tupou deal: It was a poor performance by Michael Cheika’s men on Saturday but it has generally been a positive couple of weeks for Australian rugby and they were boosted by the news that their talented tighthead prop had signed a new four-year contract. Tupou is already on the way to becoming one of the best props in the world and will be a vital part of their upcoming campaign. The fact that they have been able to keep him until 2023, particularly with more and more players heading overseas to Japan and Europe, is crucial and a deal that should be applauded.

Sbu Nkosi: That was a breathtaking performance from the Springbok wing. He is growing in confidence with each game he plays on the international stage and on Saturday against Argentina his two-try showing was a joy to watch. Both of his scores at Loftus Versfeld were special in their own right but we’re struggling to tire of watching this one.

Italy: Their 85-15 victory over Russia will do their confidence no harm whatsoever as the Azzurri ran in 13 tries in total in San Benedetto del Tronto. This is their second highest Test score and stands them in good stead ahead of their next Rugby World Cup warm-up match, against France (away) on August 30. On Sunday they also announced their squad for the tournament which is full of experience to round off a rare positive week for Conor O’Shea’s men.

France: Speaking of that next fixture against Les Bleus, they were in rampant form against Scotland to win 32-3 on Saturday. Alivereti Raka, Maxime Medard (2), Gregory Alldritt and Antoine Dupont all crossed the whitewash in a victory that will have made England and Argentina sit up and take note. If they can replicate these performances in Japan the three-time finalists surely have to be talked about as a major contender for the coveted Webb Ellis trophy.

Australia’s basics: While everything went right for the Wallabies last week, it all went wrong in the reverse fixture at Eden Park. They struggled to control possession and made simple errors throughout as New Zealand went away with a comfortable victory. The conditions weren’t the easiest to navigate but it didn’t prevent Christian Lealiifano from missing a couple of simple penalties, nor did it stop them from dropping the ball when not under pressure.

New Zealand v Australia | Bledisloe Cup Game 2 Highlights
The @AllBlacks were too strong in the wet, shutting the @qantaswallabies out with a 36-0 win in Auckland to retain the Bledisloe Cup in style.#SuperRugby #BledisloeCup #NZLvAUS pic.twitter.com/fpn1TOBVQF

Scotland: That would have been a difficult watch for Scottish fans as they were brushed aside by a rampant France in Nice. The visitors could not cross the whitewash throughout and they were behind the eight ball from the outset when debutant Raka barged his way over so early in the match. Luckily for Gregor Townsend’s outfit they have an immediate opportunity to try and right those wrongs against the same opposition at Murrayfield this Saturday.

Canterbury: While a defeat to an impressive Tasman side is nothing to be embarrassed about, this was successive Mitre 10 Cup losses for Canterbury. On the back of falling narrowly at Waikato, they would have been desperate to respond on home soil at Orangetheory Stadium against the Mako. However, they were well beaten 23-8 in a result that leaves them rooted to the bottom of the table after two rounds. Leicester Fainga’anuku’s try in particular was concerning as the Tasman wing easily brushed off the would-be tacklers. Next for Canterbury is Wellington away.

Wales’ injury management: Following their choice to keep Gareth Anscombe on the field for almost 15 minutes with what has transpired to be an ACL injury, they refused to take Biggar off when he was struggling. It was not a serious issue but why bother taking the risk? Ultimately, we don’t know whether Anscombe’s issue was exacerbated by remaining on the field, but he certainly looked far worse when he came off than when the initial injury happened. While players need the game time ahead of the World Cup, discretion is the better part of valour in these situations.

Dangerous clearout: A ruck clearout from France second-row Paul Gabrillagues on Scotland flank John Barclay was somehow missed by the officials in Nice. Deliberate or otherwise the law needed to be applied here as serious damage could have been done. It was a quartet of top quality officials in charge too on Saturday with Nigel Owens refereeing, Wayne Barnes and Federico Anselmi assistants and Graham Hughes as TMO. He has since been cited.

France lock Paul Gabrillagues has been cited for this clearout against Scotland.

Foul play contrary to Law 9.20 (dangerous play in a ruck or maul). pic.twitter.com/x6h4JaaAXT