Home Life after Rugby Who’s hot and who’s not! 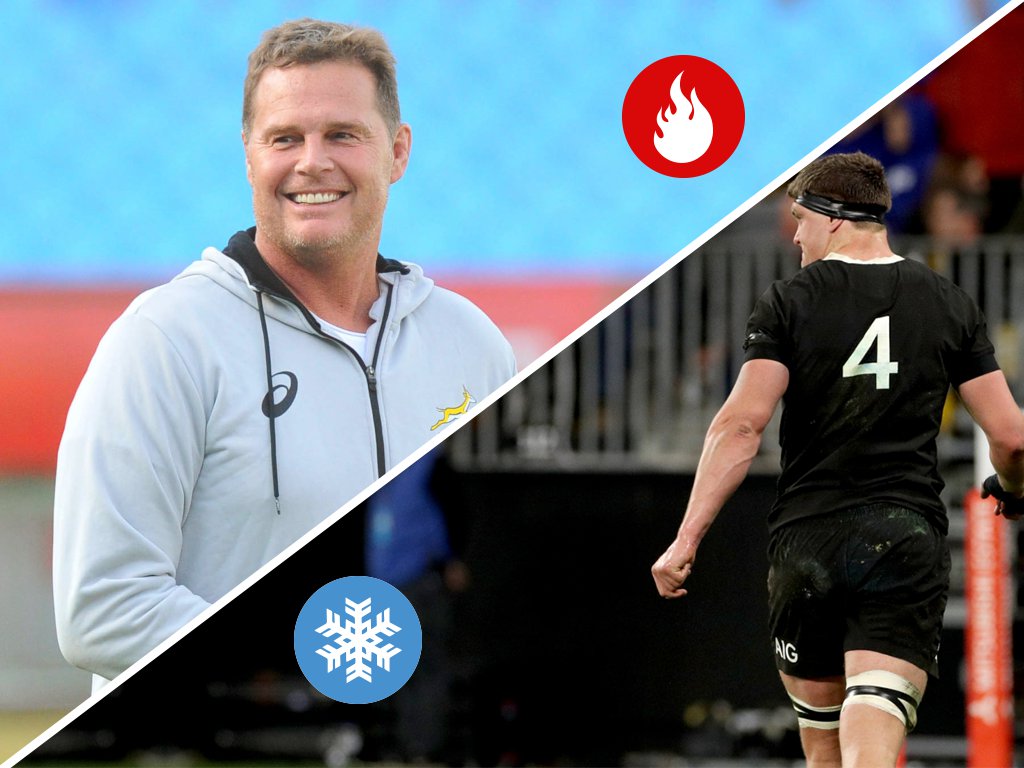 Rassie Erasmus and South Africa: The Springboks continued their excellent start to the international campaign by delivering a dominant performance before claiming a deserved 46-13 win over the Pumas in Salta. That result meant the Boks were crowned Rugby Championship winners – after they also beat the Wallabies and drew with the All Blacks – and it is the first time since 2009 that they have won the southern hemisphere’s premier competition. That makes them genuine contenders for the World Cup and Erasmus deserves plenty of credit for the team’s success as he has managed his players brilliantly and created a competitive environment while also adding depth to their ranks.

Watch: What a proud moment for South Africa! In an astounding 46-13 victory against Argentina the @Springboks have claimed the #RugbyChampionship title after 10 years! What a fantastic way to lead to the World Cup! Mooi werk manne! You have done your country proud 🇿🇦#ARGvRSA pic.twitter.com/5zwo8c3j4M

Wallabies: It was some display by Michael Cheika’s men, even before the red card, and they thoroughly deserved their dominant victory. Australia have struggled since the previous World Cup, where they reached the final, but the Wallabies rarely falter in the global tournament and they appear to be peaking at the right time. Finally, the players seemed to be confident in the game plan and they executed it brilliantly, regularly putting the All Blacks defence under duress. Nic White was excellent at scrum-half and controlled the game, while James O’Connor made a good return to the XV and Kurtley Beale was his typically exuberant self. A superb result ahead of the World Cup but they will look to build on that in Auckland.

The Wallabies open the scoring through Hodge, and how about that ball from O’Connor! #AUSvNZL #BledisloeCup pic.twitter.com/GliLbPB3Ef

England’s understrength side: The two teams took contrasting approaches to the warm-up game at Twickenham, but the hosts’ makeshift side produced a very impressive display. In a squad which featured four debutants, the Red Rose overcame a first choice Wales side 33-19 in London. While the experienced Billy Vunipola, Joe Launchbury and George Ford all played well, the uncapped Willi Heinz and Lewis Ludlam looked at home at Test level. It was also a good return for Bath duo Jonathan Joseph and Anthony Watson, who have endured long-term injuries, and leaves Eddie Jones with plenty of options as he names his World Cup squad later on Monday.

Christian Wade: The former Wasps and England winger made a big impact when he scored a 70-metre touchdown for the Buffalo Bills in their NFL pre-season match against the Indianapolis Colts in New York. It was a dream start for the 28-year-old as his score came after his first touch of the ball and his blistering pace proved a handful for the Colts defence. He deserves plenty of praise after taking the decision to switch codes and hopefully his exploits as an American Football player will continue for many more years.

Japan: The Brave Blossoms showed that they will be no pushovers at the Rugby World Cup – which they will host later this year – after winning the Pacific Nations Cup courtesy of a 34-20 victory over the USA in Fiji at the weekend. The result meant that Japan finished with the only unbeaten record at the tier two tournament – after wins against Fiji and Tonga in their previous matches – and their Pacific Nations Cup form is the perfect preparation for the global showpiece, which kicks off when they host Russia in the tournament’s opening match in Tokyo next month.

Jerome Garces: There has been plenty of debate around the red card, but we can’t see why. Under the guidelines set out by World Rugby, it was a clear decision and we applaud the referee for making it. Some have argued the mitigating factor of Australia’s Michael Hooper being low, but it wasn’t a sudden duck into the challenge; he started low and Scott Barrett chose not to wrap his arms in the tackle. He duly connected with the head/neck of the Wallaby captain and, as a result, the second-row was justifiably sent-off.

Rugby players know the score: shoulder/forearm to head/neck = red card. Scott Barrett got what he deserved. Jerome Garces ought to be applauded for enforcing the law instead of being criticised. Will Greenwood @SkySportsRugby accuses him of 'hiding behind the laws.' What?

All Blacks: Interestingly, New Zealand have not won the Tri Nations/Rugby Championship before the past two World Cup victories, but this feels different. As in 2011 and ’15, the All Blacks have used the competition to experiment but, while they did not claim the title in the aforementioned years, they still looked like the dominant force in world rugby. What transpired on Saturday, however, was verging on an embarrassment, even accounting for the red card. It wasn’t as though they performed particularly well in the preceding matches against Argentina and South Africa either. Steve Hansen still has the best – and most experienced – squad heading into the global tournament, but there is plenty to ponder for the head coach.

Australia v New Zealand | TRC Rd 3 Highlights
The @qantaswallabies produce a record score against the @AllBlacks to run away to a 47-26 victory in an exciting contest in Perth. #RugbyChampionship #TRC2019 #AUSvNZL #BledisloeCup pic.twitter.com/fcSAgmOJnz

Argentina: After the Jaguares’ impressive run to the Super Rugby final, there was an air of excitement and plenty of expectation about Argentina’s chances ahead of this year’s Rugby Championship, but they’ve failed to deliver the goods. Mario Ledesma’s men saved the worst till last as, although they made a bright start and raced into a 7-0 lead, the hosts went off the boil as the match progressed and barely tested the visitors’ defence. Their 46-13 defeat follows narrow losses to the All Blacks and Wallabies in their previous Rugby Championship matches and head coach Ledesma will have to go back to the drawing board if they want to make an impact at the Rugby World Cup.

Scott Barrett: It was a reckless challenge by the lock and, with Brodie Retallick out injured, it currently leaves them slightly bare in the second-row stocks. A ban will not rule Barrett out of the World Cup, and rightly so, but there are already concerns as to how the All Blacks operate without Retallick and this adds to the conundrum. It certainly proved costly against Australia as the hosts scored 31 points in the second half to complete a wonderful victory over the current world champions.

Just before HT, Scott Barrett is dealt a straight red for contact with the head of Wallabies captain Hooper.

16-12 at the break and Australia with the man advantage for the second half.

World Cup warm-up injuries: These encounters have already claimed their first victims with Tom Curry, Gareth Anscombe and Joey Carbery all going off with injuries. On the face of it, it did not look too bad for the England flanker, who wasn’t in any particular discomfort when the camera panned to him in the second half of England’s game with Wales, but the same unfortunately could not be said for the other two. Anscombe has now cruelly been ruled out of the World Cup with an ACL injury, while Carbery had to be carried off during Ireland’s game with Italy. However, the former was not helped by the Welsh coaches, who decided to keep their fly-half on the field, despite obviously being in discomfort. The Ospreys pivot suffered the injury at the end of the first quarter, yet he did not go off until the 34th minute.

Why keep on Anscombe when he got first knock? Seems obvious he jarred his knee after kick.

Mike Brown and Ben Te’o: The England backline duo were dropped from head coach Eddie Jones’ squad – along with Ben Spencer and Alex Dombrandt – and while it was initially believed to be due to rugby reasons, there appears to be more to Brown and Te’o’s omissions. According to a report in The Times, Brown and Te’o were involved in an altercation at a team bonding session during England’s 12-day pre-World Cup training camp in Treviso and their chances of making Jones’ 31-man squad for the global showpiece in Japan are now hanging by a thread.

If you're wondering why there's no sign of Ben Te'o and Mike Brown in the England squad at Twickenham this afternoon, here's why: https://t.co/csUxROTZZb

Samoa: After making a solid start to their Pacific Nations Cup campaign with a deserved 25-17 victory over fellow Pacific Islanders Tonga, things have gone pear-shaped for Steve Jackson’s troops in recent weeks. That win was a good confidence booster but they failed to build on it and they suffered narrow defeats against the USA (13-10) and Fiji (10-3) in their last two matches. Those losses saw them finishing in fourth place on the overall table in the six-team tournament and their current form doesn’t bode well for their World Cup chances where they are drawn in a pool alongside Ireland, Scotland, Japan and Russia.

. @fijirugby are just beautiful to watch.

⚡️ Radradra with the footwork,
👋 Botia with the delicate hands
🔥 Goneva with the pace to finish.