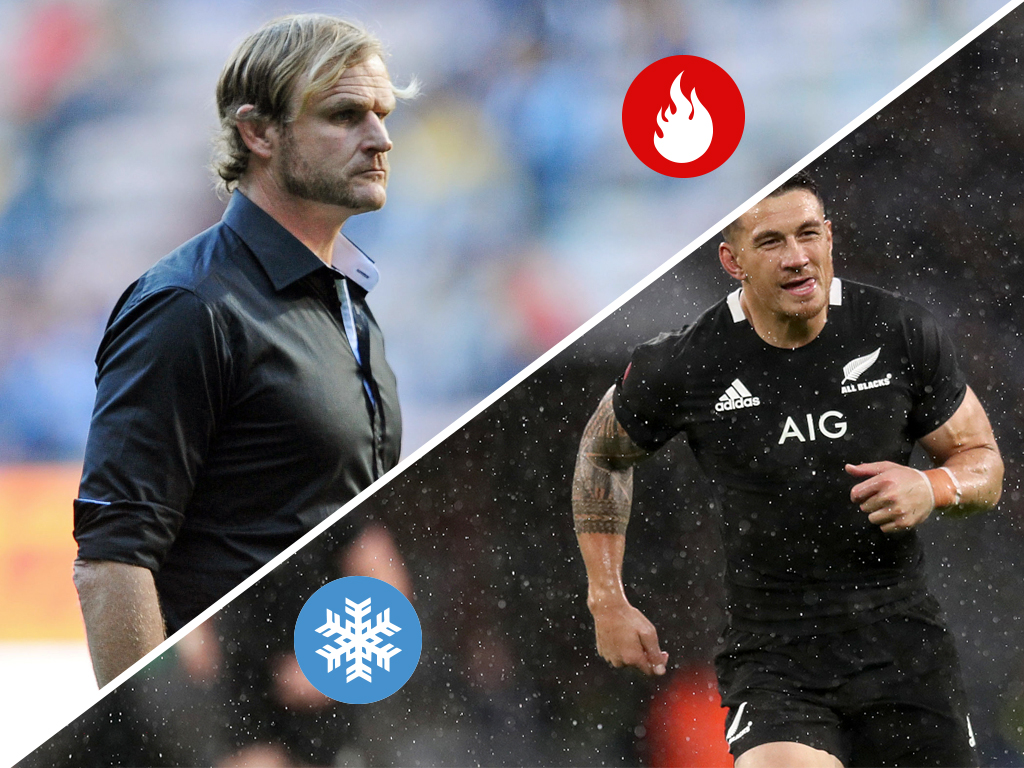 Crusaders and Scott Robertson: It wasn’t their prettiest performance of the season but the champions delivered a clinical showing when it mattered most and finished with the Super Rugby title in the bag once again. Although the Jaguares threw everything at them, the Crusaders did not panic and were deserved winners in the end. In doing so, they have solidified their position as Super Rugby’s most successful team with their tenth tournament win. They also won the title for the third successive year a feat which the franchise also achieved between 1998 and 2000. Head coach Robertson has been in charge of all three recent triumphs and he also won three titles with the same side as a player, which is an historical achievement.

Joe Marler: Quite the change of heart from almost a year ago when the Harlequins prop announced his retirement from international rugby. Marler was, to his credit, very open in his reasons for turning his back on England, stating his unhappiness in being away from his family for a long period of time, but the loosehead has evidently missed playing for the Red Rose. Having now been named in Eddie Jones’ 35-man squad, injury-depending, the prop is nailed on to go to Japan. We wish him well and hope he is more comfortable in the international environment.

Looking forward to getting stuck into the camp and giving it another crack. Thanks for the support. 🌹

Christian Lealiifano: What a remarkable story for the fly-half, who has overcome cancer to win a recall to the Wallabies squad for their Rugby Championship game against South Africa. Three years ago, Lealiifano was diagnosed with Leukaemia, but the pivot fought off the illness and has impressed in 2019. He has been an ever-present as the Brumbies reached the Super Rugby semi-finals and thoroughly deserves the chance to represent his country again.

Congrats to @CLealiifano on his call up to the Australia squad. 👏

All Blacks newbies: The latest players on the production line have been unveiled with Luke Jacobson, Josh Ioane, Braydon Ennor and Sevu Reece the new faces in the 39-man squad for the opening two Rugby Championship matches. They have all enjoyed excellent seasons for their respective Super Rugby franchises, but the latter two are perhaps the most intriguing having been part of the Crusaders’ victorious campaign. Ennor is an outstanding prospect, whether at centre or on the wing, although that is not a surprise if you watched him in 2017 World Rugby U20 Championship. Reece, meanwhile, is perhaps a more controversial selection, not for what he can do on the field but for a domestic violence incident which saw him fined by a New Zealand court. He was discharged without conviction for assaulting his girlfriend and was subsequently snapped up by the Christchurch outfit where he has been superb and, judging by his form in the Super Rugby, is well worthy of a place in the squad.

🔥 Check out Sevu Reece's 13 tries so far in 2019. Do you think he can continue this form into the playoffs and break Ben Lam's record of 16 tries in a single season?

France: A wonderful performance in the 2019 Women’s Rugby Super Series saw them overcome New Zealand 25-16 in the US. The French struggled in their opener, going down to Canada in midweek, but responded superbly by defeating the defending world champions. They dominated the majority of the match, scoring three tries through Caroline Boujard, Maelle Filopon and Jessy Tremouliere as the 2018 Six Nations Grand Slam winners got their campaign back on track.

Crusaders’ dominance: While the champions deserve plenty of praise for another excellent performance on their way to their tenth tournament win, the fact that they have been crowned champions for the third successive time is not healthy for the competition. Under coach Robertson’s guidance, the Crusaders have become a real force, particularly in Christchurch where they are now unbeaten in 31 matches. As the tournament’s most successful team, all the other sides want to knock them off their perch but that has not been so easy and their opponents will have to up their game if they want to achieve that feat.

Jaguares’ finishing: Although there were plenty of enterprising passages of play from them in the final in Christchurch, they failed to cross for a try. Their inability to score five-pointers proved costly and they were left to rue several missed opportunities after the match. Late in the first half, Matias Moroni knocked on after desperate cover defence as he was crossing the whitewash and early in the first half a pass from him to Matias Orlando was intercepted by Jack Goodhue, who dotted down behind his try-line. Later in the half, a chip kick from Domingo Miotti bounced beyond the dead-ball line with Moroni giving chase while a Miotti grubber kick was gathered inside the Crusaders’ 22 by Ramiro Moyano, who kicked ahead only for the ball to bounce into touch off David Havili.

England’s scrum-half omissions: Danny Care’s non-selection is perhaps not a surprise, given that he wasn’t involved in the training squad, but it does seem odd not to have his experience in the 35-man group. Ben Youngs is clearly the number one and Ben Spencer has enjoyed an excellent campaign for Saracens, but Willi Heinz’s inclusion is a strange one. Although the Gloucester man has been excellent for the Kingsholm outfit, he has no international experience at the age of 32 and is untested at the highest level. Having not given the requisite game time to Spencer and Dan Robson – another unfortunate to miss out – over the past couple of years, scrum-half is a real issue for the Red Rose going into the World Cup.

I think Danny Care is in Ibiza currently. I’d order another Long Island if I were him.🍹

Sonny Bill Williams injury: The centre has been struck down by yet another injury, although this one is not as serious as the one which kept him out for the majority of the Blues’ Super Rugby campaign. It does, however, add to the frustrations for Williams, who has struggled getting onto the field and, as a result, find his top form over the past four years. The All Blacks have a plethora of options at centre and, with the 33-year-old battling to be fit for their Rugby Championship opener, time is running out in the race for a World Cup squad place.

New Zealand: As mentioned, while it was a good weekend for the men’s main franchise, it was not so good for the women’s national team, who succumbed to France in San Diego. They struggled throughout against an excellent French outfit and only gained some respectability in the final 10 minutes where they pressurised the opposition defence. It led to a couple of yellow cards and a penalty try but, by that point, the match had already been decided.

25-16 WIN to FRANCE over NZ 😳 Much improved performance from the French & a different team when @JessTremouliere starts! But… I think the worst I have ever seen the @BlackFerns play in terms of basics, structure & continuity #SuperSeries2019