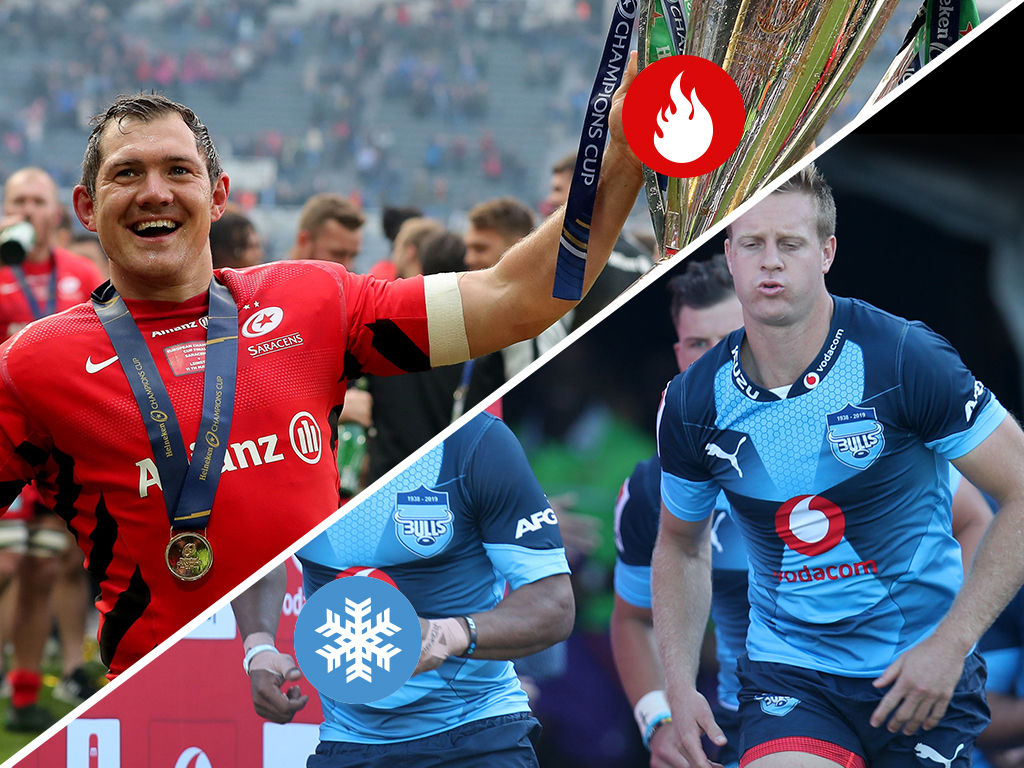 Saracens: A stunning performance from the Englishmen, who were deserved winners over 2018 champions Leinster at St James’ Park. They made far too many errors early on, which helped the Irish giants move into a 10-0 lead but, once those were eradicated, their physicality and intensity took over. Leo Cullen’s men did well to stay in what was a brutal contest, but the power of Will Skelton, Billy Vunipola and Maro Itoje was too much for the Dubliners. They were relentless, particularly in the second half, and controlled the majority of the final 40 minutes as Leinster wilted.

Alex Goode: The Saracens full-back was one of the stars during their successful Champions Cup run and was a deserved winner of the EPCR European Player of the Year award for 2019. The 31-year-old has been an ever-present for Sarries during the tournament and delivered an excellent performance in their triumph in the final. Former France scrum-half Dimitri Yachvili, who was part of the panel that chose Goode for the award, summed it up perfectly when he said: “Goode is the true X-factor at Saracens – very comfortable technically and is truly versatile, he really can make a game-changing difference.”

European player of the year – @Alex_goode0.

Clermont Auvergne: Les Jaunards have not fared well in major European finals recently, losing the Champions Cup showpiece event in 2013, ’15 and ’17. They have been labelled as ‘chokers’ but they thoroughly deserved their victory over La Rochelle in Europe’s second-tier competition on Friday. Franck Azema’s men were favourites but they were also highly-fancied in the two finals they lost to Toulon and Auvergne showed plenty of composure and quality to see off their fellow Frenchmen in Newcastle. A job well done for Clermont, who claimed their third Challenge Cup title, but the focus now switches to the Top 14 before they plan an assault on the Champions Cup next season.

London Irish’s recruitment: The Exiles have received a bit of criticism over their policy of signing foreign imports but Irish simply need them if they are to survive in England’s top-flight. The players in question are not mediocre either, with established internationals, Sekope Kepu, Waisake Naholo, Adam Coleman and Paddy Jackson all agreeing terms with the club. The competitiveness of the Premiership goes up year-on-year and next season could even eclipse the current campaign, which has proven to be encapsulating. And for those who claim they are neglecting their academy products, the Reading-based outfit have produced plenty over the years (who generally get snapped up by other clubs) and are still churning them out. Particularly look out for Ben Loader, who has been outstanding in the Championship over the past year.

✍️ | Who have we got here then? 🤔 pic.twitter.com/DLpvBoRCbX

Hurricanes: The 2016 champions put in a workmanlike performance in their derby against the Blues at Eden Park and their efforts paid off as they held an edge over their hosts in most facets of play and eventually secured a hard-fought 22-12 win. That means the Hurricanes have beaten the Blues for the eighth successive time and they are currently on a five-match winning streak in Super Rugby – after also beating the Highlanders, Sunwolves, Chiefs and Rebels – with their last defeat registered against the Crusaders in Round Seven of the competition.

Luke McGrath: Perhaps it was a team instruction but it was bizarre to see the scrum-half keep the ball in play when the clock was in the red. At the time, Leinster were 10-3 ahead and set for an important lead at the interval, but that decision was a turning point in the contest. Was it overconfidence? Poor decision-making? Or simply, a lack of awareness? Whatever it was, McGrath will regret it as Sarries won a penalty and produced an attack inside the opposition 22 which saw Sean Maitland touch down in the corner. Owen Farrell converted and the teams went into the break level, which provided a huge boost for Mark McCall’s charges.

Blues: After what appeared an improved campaign for the Aucklanders, hopes have rather dissipated over recent weeks following four successive defeats, which leaves them bottom of the New Zealand Conference. They could still reach the play-offs, such is the congested nature of Super Rugby this season – other than the Crusaders and Hurricanes at least – but they have plenty of work to do in their final few games if they are to finish in the top-eight.

😮 Ben Lam…Can anyone stop him?

Bulls: It has not been a terrible campaign for the Pretoria-based side but heavy home defeats have almost become commonplace. Losing to the Crusaders is no disgrace but it was all too easy for the defending champions, who easily cut through a porous Bulls defence. Scott Robertson’s men did not even play especially well but the difference in the basic skills of the two sides was stark. They eventually succumbed 45-13 on Friday and it follows a similarly awful 56-20 thrashing at the hands of the Chiefs earlier in the season. There is certainly plenty to ponder for Pote Human and his charges ahead of their next encounter against the Rebels.

Bulls v Crusaders | Super Rugby 2019 Rd 13 Highlights
A hat trick of tries from winger Sevu Reece has led the @crusadersrugby to an impressive 45-13 win over the @BlueBullsRugby in Pretoria.#SuperRugby #BULvCRU pic.twitter.com/NTq1pDOMJ5

Israel Folau: Has appeared a lot in this section over recent times and duly does so again after a code of conduct hearing found him guilty of a “high level breach” following an Instagram comment which said “hell awaits” gay people. Rugby Australia stated their intention from the get-go to terminate his contract after yet another abysmal social media post, so you would assume his time in Australian rugby is at an end, particularly since Folau himself has shown no remorse over the incident, but a punishment has yet to be decided.

Israel Folau is NOT persecuted, he lives in Australia, he attends his church and practices his faith unfettered, this is a conduct dispute NOT a religious freedom dispute.

Its insulting to those who suffer REAL persecution here & elsewhere to frame it otherwise.#Auspol

Sunwolves: While the Brumbies were full value for their win in their own backyard, their opponents hardly put up a fight and battled to get going before suffering a humiliating 33-0 defeat. That was the second time this year that the Sunwolves failed to score points in a match – after losing 52-0 to the Highlanders in Round 11 – and their loss to the Brumbies means the Tokyo-based outfit are entrenched at the bottom of the Australian Conference and the overall standings with just two wins from 12 matches played. They are currently on a five-match losing streak after also going down to the Rebels, Hurricanes, Highlanders and Reds.