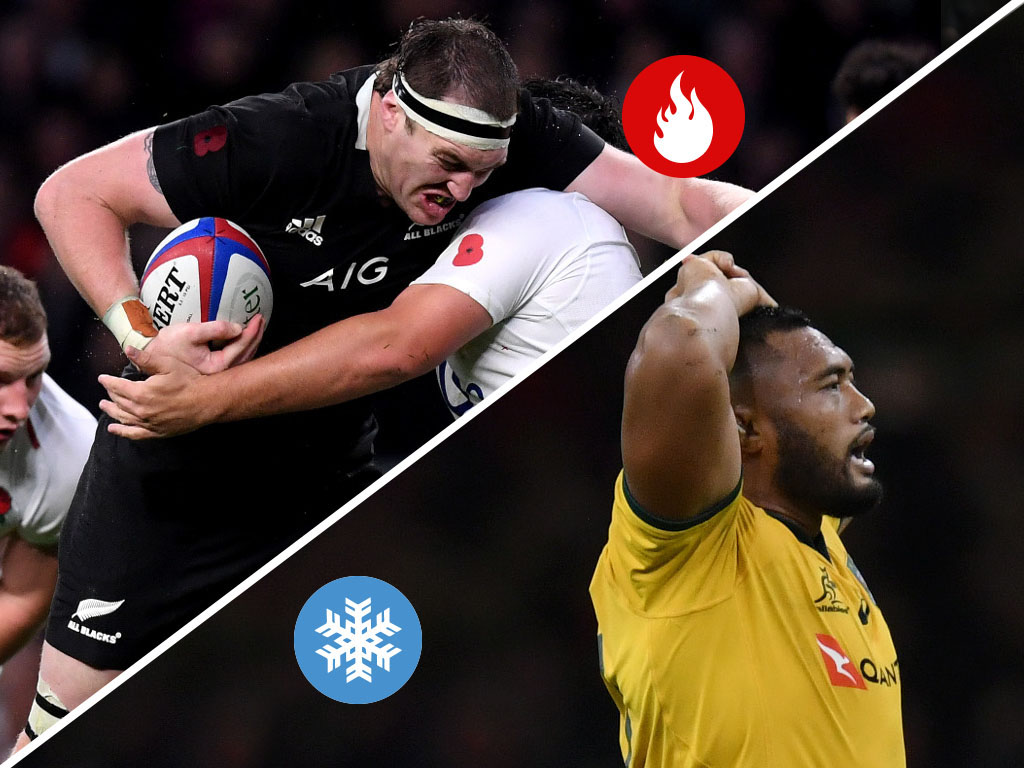 Brodie Retallick: It was not the best of starts to the game for the New Zealand lock as he spilt the kick-off. But from thereon in, it was a flawless performance and one of the most dominant line-out efforts seen at Test match level in the modern era. Retallick ensured Jamie George and Maro Itoje had a nightmare, stealing at least three line-outs from right under the England lock’s nose. As well as that, the 27-year-old carried powerfully and was a terror in the loose.

Tommy Seymour: The Glasgow Warriors winger enjoyed a fantastic day at the office on Saturday as he scored a hat-trick. Seymour touched down thrice in a 20 minute period as he cut the Fijian defence to pieces with his excellent support running. The 30-year-old appears to be firing on all cylinders ahead of what should be his last World Cup next year, considering he will be 35 the next time the global showpiece comes around.

?? | Today’s triple-try hero Tommy Seymour now has 1?9? tries for Scotland and becomes our fourth highest scorer of all time! ?? pic.twitter.com/wgIrETnxfM

Wales: A 9-6 victory over the Wallabies on Saturday means Wales have now won their last seven games on the bounce and ended a 10-year run of 13 straight defeats to the Wallabies. The win is a timely psychological boost for Wales ahead of a repeat encounter in Japan next year, with the sides having been drawn in the same World Cup pool.

Brave Brazil: After being given an 80 point handicap with the bookmakers prior to the game, the Brazilian rugby community will be delighted with a very respectable 35-3 defeat to the Maori All Blacks. But what will please rugby organisers within the country will be the record 34,000 spectators in attendance for the match played at Morumbi Stadium in Sao Paolo, smashing the previous record of 10,400 for a match against Germany. With such a large population, the possibilities for Brazilian rugby are exciting if the country can tap in to its vast potential.

34,000 attendance for Brazil vs Maori All Blacks

Sam Underhill’s non-try: It is an unenviable task being an official and that was demonstrated on Saturday after Marius Jonker denied England a potentially match-winning try against New Zealand. Jonker adjudged that Courtney Lawes was offside when he charged down TJ Perenara’s attempted box-kick, which duly led to Underhill collecting and touching down. The South African TMO may have been correct in his interpretation but the question was whether there was enough evidence to overturn referee Jerome Garces’ decision, who signalled a try. It is the oddity of the rugby law book when the outcome may have been right, yet the team on the wrong end of the call can still feel aggrieved. Ironically, something similar happened to the All Blacks in the Lions series last year when they were denied a late penalty after Romain Poite decided to use the TMO and alter his original decision. Again, the verdict was correct, after pictures later showed that the ball had in fact gone backwards, but were the guidelines set out by World Rugby followed properly by the match officials in both instances?

Garces had allowed the try.

Should not be overturned unless clear and obvious

It was not clear and obvious.

Ludicrous that such a spectacle decided on such fine-line judgements https://t.co/Y43ESdqEb6

Samoa head coach Steve Jackson: Last month, Jackson had declared himself unhappy with Samoa’s November schedule, which pitted them against USA, Georgia and Spain. The Samoa mentor complained at the time: “We don’t want to be playing tier two teams, but that’s just the reality of the situation we’re in at the moment.” This, despite the USA and Georgia actually sitting above 16th-placed Samoa in the World Rankings. Jackson was made to eat his words on Saturday as the USA recorded a first ever victory over Samoa – a 30-29 win in San Sebastian, Spain.

Australia: That’s now eight defeats in their last 11 internationals for the Wallabies with the heat remaining on head coach Michael Cheika. Right now there are plenty of teams putting their hand up as possible Rugby World Cup winners but unfortunately for those Down Under this Australian side are not one of them. This weekend’s fixture against Italy should act as the perfect fixture to put recent woes behind them.

Wallabies performance makes a mockery out of claims they improved in third Bledisloe. They’re just a poor Australian side at the moment. #WALvAUS

Inconsistencies: It’s a shame that rugby is discussing crucial decisions in the aftermath of an international weekend but there was again a moment that had us scratching our heads. In the England versus USA women’s clash on Friday, visiting player Megan Rom was shown a red card on 15 minutes for leading with the forearm into contact. A day later Wales lock Alun Wyn Jones did something similar against Australia but went unpunished. The video shows both acts and it’s tough to see the difference. Of course, officials cannot pick up everything on a field.

1/2 HOW is this movement acceptable for men but not women? A ‘fend’ for @AlunWynJones but a red card for @USARugby’s Megan Rom!? I appreciate officials make different calls, but the gap is wide here #gendered @lucylomax16 @Rugbyworldmag @WorldRugby @ScrumQueens @EnglandRugby pic.twitter.com/Byrv40lnmK

Hong Kong: Credit of course to Germany but what a disappointing start to the Rugby World Cup 2019 Repechage for Hong Kong as they lost 26-9 at the Stade Delort in Marseille on Sunday. Germany belied their position as the lowest ranked team in the Repechage to take the win, with their second-half display seeing them beat a side who were ranked eight places higher than them in the World Rankings going into the match.