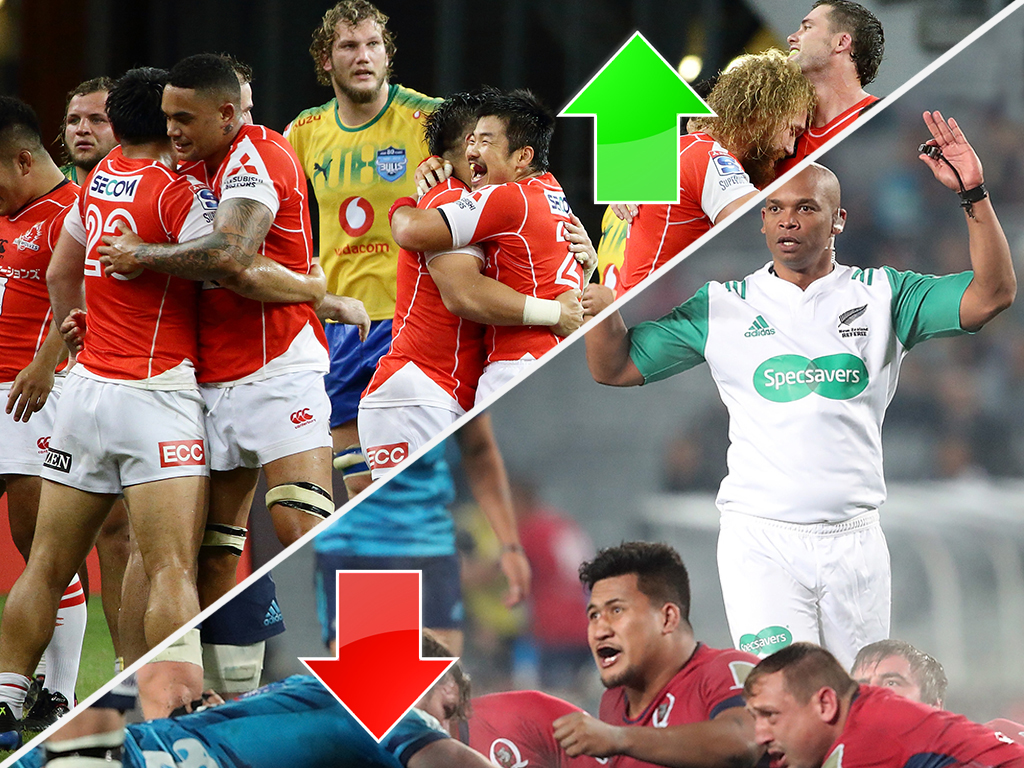 It’s time for our Monday wrap of who has their name in lights and who’s making the headlines for all the wrong reasons over the past week.

Sharks: Trailing 21-11 at half-time, the Sharks came from behind to beat the Lions 31-24 and keep their play-off hopes alive with a superb display in Durban. Having weathered a first-half storm from the Lions, the home side hit back brilliantly in the second-half. Tries from Dan du Preez, Andre Esterhuizen and Lwazi Mvovo as well as a fine kicking display from Robert du Preez, who racked up 14 points, contributed to a crucial victory.

Jaguares: It is hard to believe that this Jaguares team is the same group of players that were so dismal in Argentina’s defeat to Scotland last weekend. Mario Ledesma’s side romped to their seventh successive victory to move to three points behind the Lions with a game in hand over the South African side. The Jaguares’ rush defence unsettled the Stormers and they played with great width and pace on offence.

HIGHLIGHTS: 2018 Super Rugby Week 17: Jaguares v Stormers
The Jaguares edged closer to the play-offs with a 25-14 defeat over the Stormers on Saturday in their last home match of the season. #JAGvSTO #SuperRugby #Week17 #JugamosTodos pic.twitter.com/PdRgin4mgp

Samoa and Hong Kong: These two countries were in fine form in their Rugby World Cup qualifiers over the weekend and made big strides in their bids to be part of the global showpiece in Japan next year. Both countries played in the first leg of two-match qualifiers and registered impressive victories. Samoa were in a rampant mood, scoring 10 tries in an impressive 66-15 triumph against Germany in Apia. Meanwhile, Hong Kong did well away from home to beat the Cook Islands 26-3 in Rarotonga and will be confident ahead of their next encounter. If Hong Kong win over the two legs, they face Canada, the loser of that series between Samoa and Germany and a yet-to-be determined African country in more Rugby World Cup play-off matches.

Counter-attacking rugby at its finest from Samoa in their #RWC2019 qualifier victory over Germany pic.twitter.com/bH4PGgv4hb

Sunwolves: The Tokyo-based franchise made history by claiming their first-ever victory in Singapore – their second home – when they beat the Bulls 42-37 on Saturday. The result is also momentous for the Sunwolves as it is their third win this year – after triumphs against the Reds and Stormers – which is their most victories during a campaign and beats the two they achieved last year while stand-in coach Tony Brown will also be delighted to secure a win in his first match in charge of the team.

Highlanders’ first-half in Suva: The 2015 Super Rugby champions’ first-half performance in their New Zealand derby with the Chiefs in Suva is something which they will want to forget in a hurry. With it being Waisake Naholo’s 50th appearance for the Highlanders, there was plenty of hype ahead of the match but the men from New Zealand’s South Island failed to pitch up and went into the sheds at half-time without troubling the scoreboard and trailing the Hamilton-based outfit by a whopping 45 points. Highlanders head coach Aaron Mauger must have read his troops the riot act during the interval as they scored 22 unanswered points in the second-half, but that first-half horror show meant they couldn’t overtake the Chiefs in the end.

HIGHLIGHTS: 2018 Super Rugby Week 17: Highlanders v Chiefs
Despite being down 42-0 at half time, the @Highlanders fought back brilliantly to deny the @ChiefsRugby a bonus point but couldn’t stop them taking the win in an exciting game of two halves. #HIGvCHI #SuperRugby pic.twitter.com/MykryMnRNP

Stormers: Their defeat to the Jaguares in Buenos Aires means that the men from the Cape have now completed their away programme for the 2018 season, losing all eight their matches on the road. Needless to say, they are out of the running to reach the tournament’s knockout rounds as it’s the worst-ever performance in their history and two further home defeats – against the Chiefs and Lions – mean they have lost 10 out of 15 matches so far this year. This means Robbie Fleck’s charges will be playing for nothing but pride when they host the Sharks in their final game of their campaign at Newlands on Saturday.

Officiating in Auckland: The Blues claimed a 39-16 victory over the Reds at Eden Park and although both sides had two players sent to the sin-bin, Reds head coach Brad Thorn was left somewhat aggrieved as the yellow cards issued to Jordan Petaia and Taniela Tupou – in quick succession – had a big impact on the game as the Blues scored 13 unanswered points during the duo’s stints on the sidelines. Thorn questioned several of referee Egon Seconds’ decisions after the match and said “the game is getting hurt” by some of the officiating. Seconds and his television match official, Ben Skeen, were also criticised on social media particularly for the decision to send off Tupou for a no-arms tackle, after no action was taken against Jerome Kaino for a shoulder charge on Scott Higginbotham earlier in the game.

Ben Skeen + Egon Seconds – how have you missed the Jerome Kaino shoulder on Scott Higginbotham but throw Tupou in the bin for that? Seriously? #BLUvRED

Hurricanes: After New Zealand teams’ dominance over their Australian counterparts in recent years, it is fair to say that the 2016 tournament winners’ defeat to the Brumbies came as a bit of a surprise, despite the game being played in Canberra. That means the Hurricanes have now suffered their third successive defeat, after losses to New Zealand Conference rivals the Crusaders and Highlanders, and their head coach Chris Boyd slammed his side’s second half performance as the “worst 40 minutes of football” while he has been their coach. That effort is a far cry from their nine-match winning run from earlier in the year. This loss to the Brumbies is also significant as it means the men from Wellington trail the Crusaders by nine points at the top of the New Zealand Conference and are unlikely to overtake the champions with just two rounds of matches left before the play-offs.