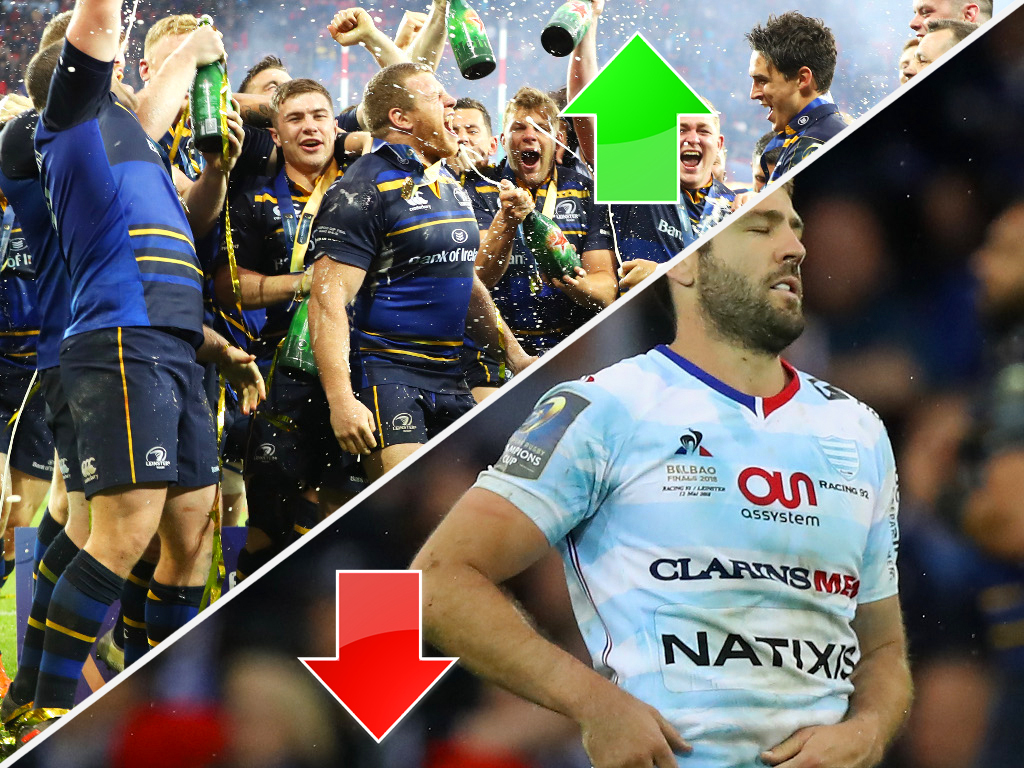 Isa Nacewa and Leinster: What a player Nacewa is and what a team Leinster are. It may not have been their best performance of the Champions Cup campaign but they found a way to win. With Johnny Sexton seemingly nursing an injury, the centre stepped up and, despite the pressure, scored two penalties to win the game for the Irish province. Nacewa is retiring at the end of the season and, although there is still one trophy left for Leinster to try and capture, it was a fitting way for the Dublin outfit to claim their fourth top-tier European crown.

But Leinster lead for the first time through the boot of Isa Nacewa! pic.twitter.com/Kf8wqk3Fhn

Teddy Iribaren: Some wrote Racing 92 off after Maxime Machenaud was ruled out, forgetting that his replacement is also a fine player. There are three certainties in life: death, taxes and top quality French scrum-halves, and Iribaren was outstanding. James Ryan was the official man of the match but, even in a losing cause, that award should have gone to the Racing number nine, whose kicking, both in general play and off the tee, was exceptional throughout. With the Frenchmen losing Dan Carter before the game and Pat Lambie after three minutes, the former Brive half-back took responsibility and was unfortunate to be on the wrong end of the result.

Gotta be M.O.M whatever happens the @racing92 #9 Iribaren stepped in on the biggest of stages and has been pure class

Cardiff Blues: It was an incredible fightback from the Blues in Bilbao on Friday. Trailing 20-6 at the interval they came out firing in the second-half and eventually finished on top 31-30 to claim the Challenge Cup title. It was the perfect send-off for players such as prop Taufa’ao Filise and coach Danny Wilson as there’s nothing quite like silverware as a goodbye. Hats off as victory looked highly unlikely.

Sunwolves and Hayden Parker: Jamie Joseph’s charges’ 63-28 victory over the Reds was a momentous one as it was their first triumph of the season after suffering nine successive defeats. The result has extra significance for the Tokyo-based outfit as it was their biggest ever winning margin, since they joined the tournament in 2016, with Parker leading the way with a superb all-round performance. The former New Zealand U20 representative’s 36-point haul is a new record for the Sunwolves and he deserves a special word of praise after succeeding with 12 out of 12 efforts at goal. Next week they host the Stormers and with confidence high they might well back this victory up.

Grenoble and Perpignan: Congratulations to both for claiming their place in the Top 14 for next season. Perpignan secured promotion by comfortably defeating Grenoble in the Pro D2 final last weekend, but it did not adversely affect the runners-up with them overcoming Oyonnax in the play-off on Saturday. They dominated from start to finish, going 28-10 up at the break, before scoring three more tries in the second period to secure an impressive 47-22 triumph at the Stade des Alpes.

Bilbao: It was a risk taking the European finals to Spain but it paid off with the event excellently organised and the games very well received. Although the Challenge Cup was not a full house, it was still the second best attendance for a final ever, while the Champions Cup showpiece had a great atmosphere. The hotels were expensive and the encounter between Leinster and Racing 92 was a disappointment in terms of the quality, but the whole weekend was generally a success. Roll on Newcastle 2019.

Having suffered the hell of getting in and out of Cardiff and Twickenham on match days, or sprinting for last RER at Stade de France, bravo Bilbao.

Waratahs: Despite occupying top spot in the Australian Conference, Daryl Gibson’s men are undergoing a terrible slump and their 31-29 loss to the Crusaders in Christchurch is their third successive defeat after also going down to the Lions and Blues. What makes Saturday’s loss worse is that they held a comfortable 29-0 lead by the half-hour mark and were on course for their first away success against the Crusaders since 2004 until the champions launched a stunning comeback which sealed them the win. To lose after being 29-0 up is surely unforgivable.

Joe Moody and the refereeing: How on earth was Joe Moody’s act of foul play not spotted by referee Ben O’Keeffe and TMO Aaron Paterson? While the Waratahs should never have let a 29-0 lead slip, and that is documented above, they can rightly feel aggrieved over this incident. It was not sly, not caught by the camera 10 minutes later but a clear arm to the face of Kurtley Beale, yet nothing was done at the time. Questions must be asked of both but particularly the TMO, who should have alerted O’Keeffe to the matter. It also opens them up to accusations of bias and no doubt a debate over non-neutral refereeing will rage again.

Remi Tales: It was not Tales’ fault that he was thrust into the Champions Cup final after three minutes having not previously featured in this season’s knockout stages, but his decision to go for the drop-goal in the last minute was rash. Iribaren did a fine job of taking the pressure off the fly-half during the match and, as a result, the 34-year-old’s performance was solid, but it was a strange call at the end. If there were two points between them, fair enough – it would have been an opportunity to win the game – but Racing should have remained patient.

Challenge Cup final officiating: It has been a poor weekend for officials in both hemispheres and it is fair to say Jerome Garces did not have his best game. The Frenchman’s refereeing of the breakdown was generally reasonable, save a couple of dodgy calls, but there were two moments which potentially provided a 14-point swing in the favour of Cardiff. While Garyn Smith’s try was tight, the wing did appear offside, albeit you can see why the officials ruled in the Blues’ favour. However, it was Josh Hohneck’s first half pass to Lewis Ludlow which was the most contentious. It was not forward and Gloucester could have gone into the interval with a 27-6 advantage, which should have been enough to win the game. Still, the Cherry and Whites were slack in the second period and can only blame themselves for failing to turn a 14-point buffer into a victory.

You’ve also stopped a prop from setting up possibly the best try of his career!”

Lions: Three defeats in a row for the 2016 and ‘17 Super Rugby finalists. Although their schedule has been tougher this year, they do not look like the side from the past two campaigns and are under pressure from the franchises behind them in the South African Conference. Swys de Bruin’s men have a seven-point buffer over the Jaguares, Bulls and Sharks but the teams are queuing up should the Johannesburg-based outfit continue to falter.