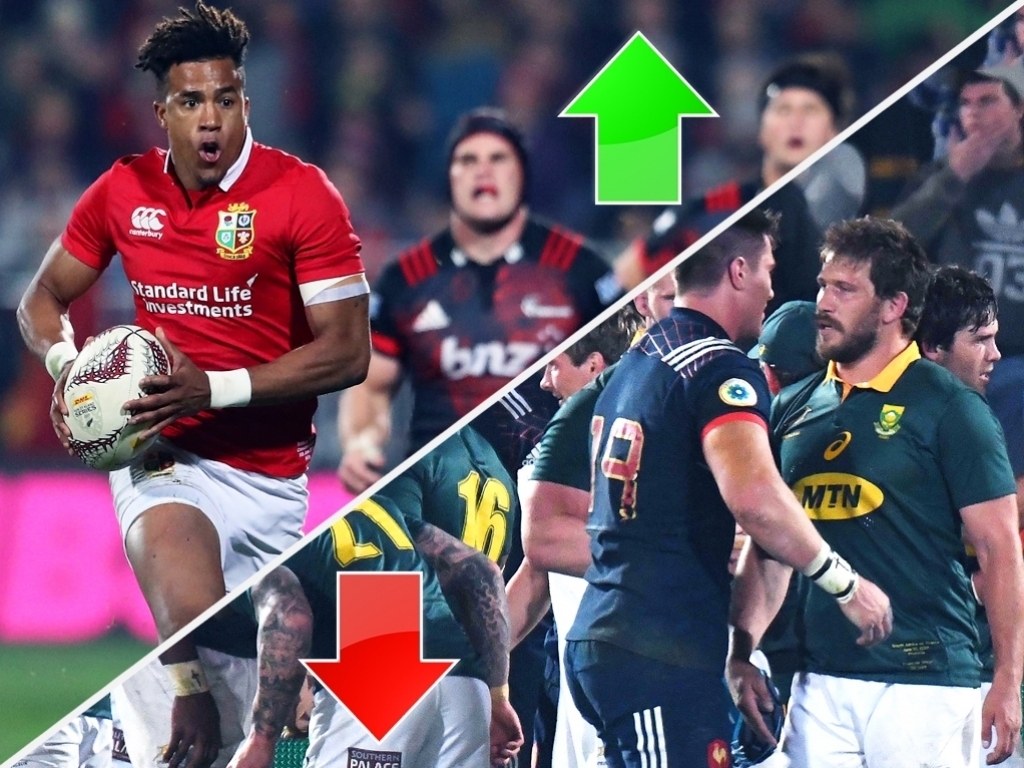 Lions: That's more like it. After some were doubting whether they would win another match on tour the Lions delivered a defensive display for the ages to keep a dangerous Crusaders outfit tamed. There is surely more to come in attack, but it feels as though the tour is back on track after the wobble against the Blues, as the spine of the Test side starts to reveal itself.

Conor Murray and Owen Farrell: Two certainties in that regard are Murray and Farrell. Talk continues around moving Farrell to 12 with Sexton at 10, as we saw for the majority of the game in Christchurch after Jonathan Davies went off injured, but Farrell's best position is still at fly-half and he not only excels in that role directing the side and with his tactical kicking, but is also emerging as an outstanding leader. Murray's box-kicking also deserved plenty of praise, fitting into the Lions' game-plan perfectly.

South Africa: Surprisingly good against France, although how much of that was down to absentees for les Bleus and the tourists playing at altitude in Pretoria remains to be seen. But, having pummelled the Springboks during their dire 2016 run, it's only right to acknowledge the positives of a big win at Loftus. Malcolm Marx was outstanding, as were the half-backs, and Andries Coetzee was convincing at full-back. Around that Lions core, the Boks might just go somewhere this year.

Argentina against England: How on earth did that happen? Those packed into the stands at San Juan were lucky enough to watch one of the games of the year between full-strength Argentina and very raw England, who with ten new caps in their 23 of which nine played – next time Jack Singleton, next time – England pulled off a remarkable comeback thanks to Denny Solomona's late try. The lead constantly changed hands, and some of the running rugby and offloading was a joy to watch. More of the same this week please.

Keith Earls: A class apart in New Jersey as Ireland made light work of the USA, with the Munster back grabbing two tries and setting up a few as well in commanding performance from the Ireland veteran.

Finn Russell: On fire for Scotland in Singapore, with his offload to Ross Ford absolutely exquisite as Scotland ran riot against Italy for a big win. Proved why he was in the conversation for Lions selection at times throughout last season with an accomplished performance.

Georgia: What an effort from Milton Haig's squad to go to Canada and not only win, but to nil their hosts as well in a 13-0 triumph. All the points went to star full-back Merab Kvirikashvili in Calgary and even if this wasn't the best of matches, Georgia will happily take it into the game against the USA next weekend.

All Blacks tight five: Worrying signs? Probably not of huge concern for Steve Hansen, but even so, watching Joe Moody, likely starter at hooker Codie Taylor, Owen Franks, Luke Romano and Sam Whitelock get shoved around the Lions in the scrum will have raised a few eyebrows in the All Blacks coaching camp, with less than two weeks to go until the first Test. On an off night for the Crusaders as a whole, suffering their first loss of the year, this stood out.

France's unusual lineout tactic: Quick tip for Camille Chat; when in position to strike from a five-metre lineout, try to avoid throwing the pill straight into the hands of Eben Etzebeth. The fact that France did this twice trying to force a comeback at Loftus was criminal. Twice? Mon dieu.

Argentina's drop goal decision: Critics were quick to point to the fact that Argentina's go-ahead drop goal against England came too early, and they have a point. Juan Martín Hernández dropped back into the pocket in the 76th minute, giving England enough time to try and turn the game their way again. At the time Argentina were camped deep in English territory and working the phases through their forwards, so why not continue and wind the clock down in the hope of a penalty? How costly that proved to be when Solomona went from zero to hero.

Italy: A clear gap in class between the Azzurri and Scotland, but the most frustrating thing for Conor O'Shea will have to be Italy's discipline. From the start they were in the bad books of referee Paul Williams, coughing up simple penalties, which kept them right on the back foot. There is so much to work on to make them competitive again.