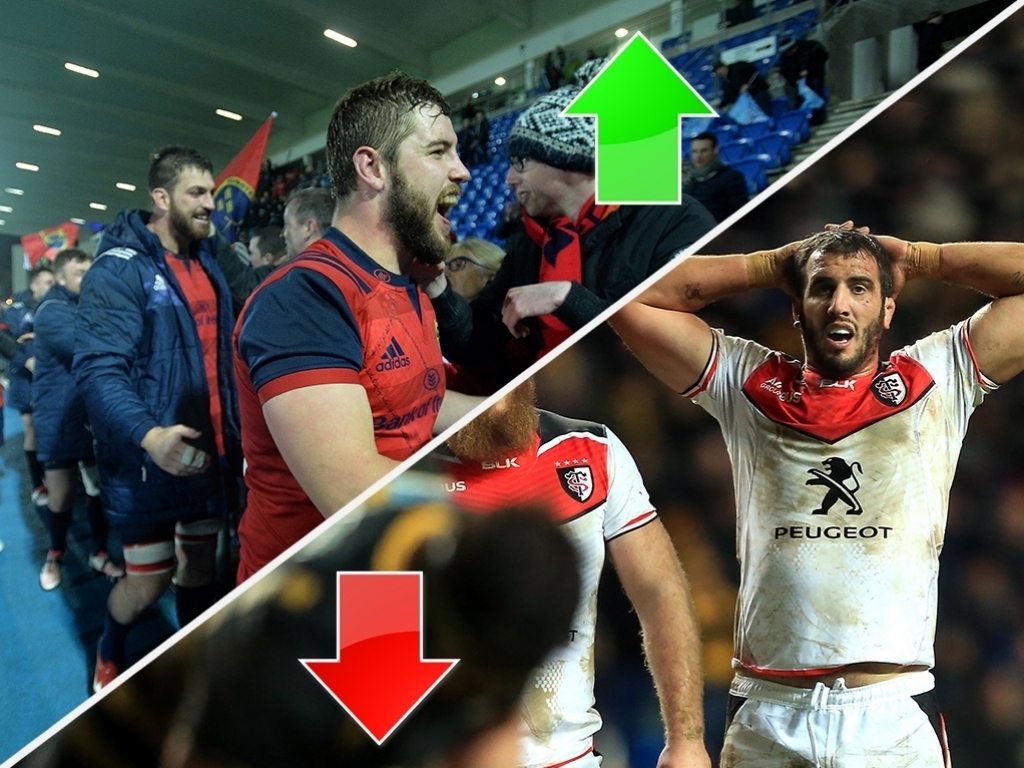 It’s time for our wrap of who has their name in lights and who is making the headlines for the wrong reasons.

Munster: Through to Europe’s quarter-finals yet again after coming out on the right side of a bruising, hot-headed battle at Scotstoun. Glasgow gave Conor Murray everything they had – on and off the ball – but the Munster scrum-half and his side got the win, their fourth of the pool stages. Beautiful try for the final go-ahead score.

Jack Conan: A hat-trick on your first European start for two seasons is some return, which might be enough for Conan to keep Sean O’Brien on the bench next week when Leinster head to Castres. Ireland’s back row options run absurdly deep but Conan did his chances of winning a second Test cap the world of good.

Exeter Chiefs: Where did that come from? Exeter felt down and out of Europe before the weekend but now have a sniff of qualifying as a best runner-up thanks to their win over Ulster on Sunday. Jack Nowell’s form means he will start for England in the Six Nations and surprise surprise, Thomas Waldrom bagged a couple of tries. It will require a miracle and results going their way, but who knows – the Chiefs will remember last year’s drama well.

Dan Robson: Minute to go on the clock in Coventry and Robson came up big with the match-winning try. That is two weeks in a row that Wasps have narrowly defeated opponents in big matches – first Leicester and now Toulouse – and frankly they haven’t played at the best. As long as individuals keep producing moments of brilliance, then those wins will continue.

Connacht: Despite a horrendous injury list, and at one point being down 14-7 to Zebre, Connacht were never going to be stopped in Galway and did their chances of progressing the world of good with that 66-21 thrashing.

Suntory: Top League title winners in Japan and congratulations to George Smith, who at 36 keeps defying expectations. Saturday was the Sungoliath’s first championship in four years.

Montpellier: Frans Steyn’s red card of course changed the game but as we’ve seen in recent times teams adapt with 14 men and remain competitive. Montpellier showed no signs of continuing that trend in Friday’s rout at the RDS. They looked short of composure, which is weird for a side near the top of the league in France. Nemani Nadolo barely getting his hands on the ball is a crying shame.

The Will Skelton ’slap’ incident: We get it. Skelton is a giant. And his hands are bigger than the average man, no doubt. But the reaction from James Davies here… well, judge for yourself. Oscars season after all is approaching.

Kieran Longbottom’s yellow card: A nonsense call. Longbottom goes in low on Guilhem Guirado, tries to wrap his arms, and yet because the France hooker ricochets up into the air the Sale prop ends up in the bin. Where is the consistency?

Toulouse: So close in Coventry from achieving what would have been one of Toulouse’s biggest results from the last few seasons. Thierry Dusautoir and Maxime Médard deserved better after fine individual performances and now the four-time champions have to win at home to Connacht if they want to make it as a best runner-up. What might have been had Jean-Marc Doussain packed his kicking boots.

Zebre: Make that now 136 points conceded in Zebre’s last two games, with no wins since that away result over Edinburgh at the back end of October. Hence having their own section.