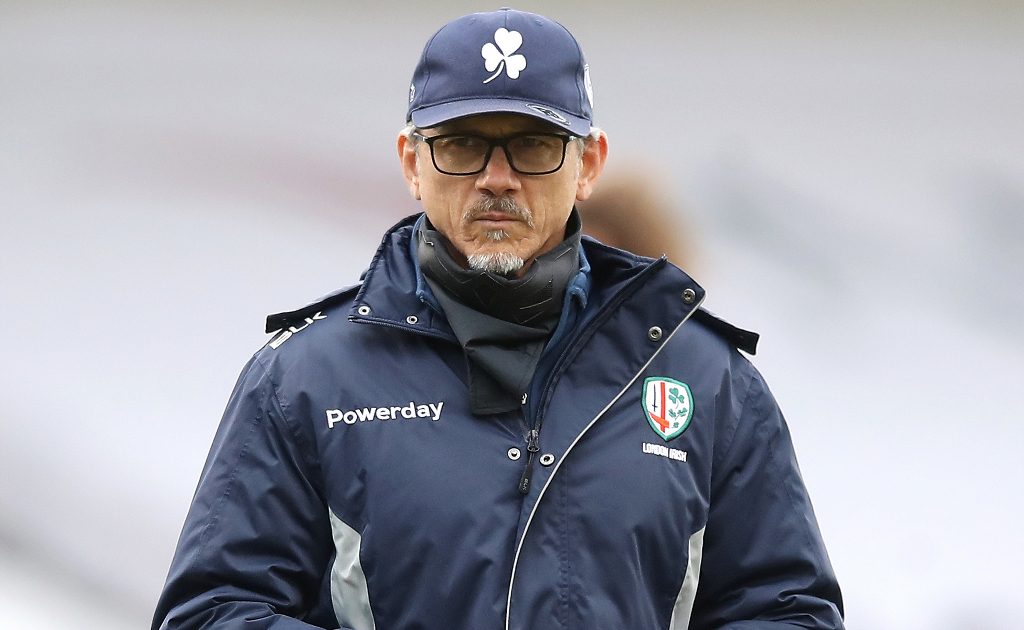 London Irish coach Les Kiss said his team are starting to build momentum following a slow start to the 2020/21 Premiership campaign after seeing them claim a 22-19 triumph against champions Harlequins at Twickenham Stoop.

Although it was only Irish’s second league triumph of the season, it ends a good stint in November which also saw them snatch a come-from-behind draw against Saracens at StoneX Stadium and two victories in the Premiership Rugby Cup.

The Exiles are now up in seventh position in the Premiership standings after inflicting a third loss of the campaign on Quins, who were without the services of England internationals Marcus Smith, Alex Dombrandt and Joe Marchant.

Kiss said: “We’re probably in a different sort of stage to what Quins are.

“We’re still trying to find out about this new group London Irish are building, [but after] two wins in the Prem Cup, to get another win just ratifies the work we’re doing.

“The boys are trusting each other and trusting the game that they’re putting together.

“I thought it was a great derby game, to tell you the truth, but to get that game, to get away from a draw, it’s nice.

“I’ve missed the song tonight – it would’ve been nice to have been in there – but I think emotion is a massive part of the game and that came through tonight, as defence is where you see most of your emotion.

“We were under extreme pressure, their scrum was going well, but our defensive line just kept turning up and put the pressure on to turn that ball over.”

Harlequins led 14-10 at half-time as tries from Oscar Beard and Luke Northmore came either side of Agustin Creevy’s pushover score for the visitors.

Tries by Rob Simmons and Ben White before the hour mark helped turn things around for the Exiles, who held on after Beard claimed his second.

Harlequins senior coach Tabai Matson said: “Any time you lose at home, it’s frustrating and I think when we got up in the first half, we definitely had opportunities to keep moving the scoreboard.

“But we didn’t exit well, had a high penalty count and our kick-offs are something we’ll probably be focusing on.

“Every time we scored the points, we let them back in and we seemed to defend for the next five minutes.

“A lot of those players didn’t play in the Prem Cup – maybe a handful – but we’ll just review how those players went, that hadn’t played for three weeks.

“Two [of our England players] were available this week, Joe Marchant tweaked his hamstring during the training week, so we looked after him and we get a couple back next week, so that’s great for us.

“That’s the nature of the beast: case by case, they need different leave after one month of pretty intense autumn rugby.”

Exeter board to make a decision over club’s branding

Meanwhile, Exeter Chiefs have revealed that their board of directors are set to meet “within the next few weeks” to make a decision on the club’s branding.

The Premiership and European champions in 2020 are under great pressure to scrap its Native American branding.

Earlier this year, Exeter decided to retain its Chiefs branding, but opted to “retire” club mascot ‘Big Chief’ following a board review.

An Exeter supporters’ online petition had gathered more than 3,500 signatures, calling for an end to what has been described as the club’s “harmful imagery and branding”.