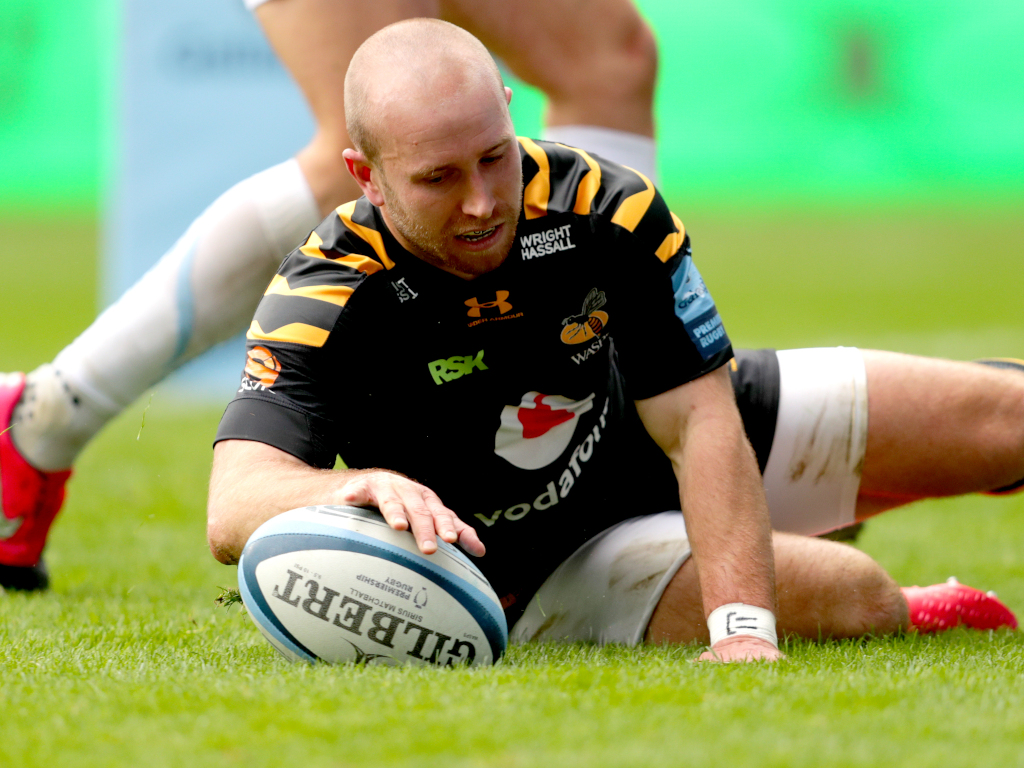 Wasps cruised into the Premiership play-offs by posting a league record 46-5 victory over Exeter at the Ricoh Arena on Sunday.

A bonus-point win guaranteed that Wasps finished second behind the Chiefs in the table.

But their opponents back at the Ricoh Arena next weekend are still to be decided following Premiership Rugby’s postponement of the clash between Sale and Worcester until Wednesday after 16 Sharks players tested positive for coronavirus.

If that game takes place – it is subject to stringent retesting – and Sale win with a bonus point, then they will travel to Wasps.

And Wasps took full advantage, reeling off an eighth win from nine starts since the Premiership restarted in August and collecting their biggest league victory over Exeter.

Wasps went into the game without injured flanker Jack Willis, so Thomas Young deputised, and there were also starts for prop Simon McIntyre and hooker Tommy Taylor.

A second Gopperth penalty after Exeter players strayed offside in front of their own posts doubled Wasps’ advantage, then Dollman was forced back over his own line, giving the home side a five-metre attacking scrum.

Exeter cleared the danger, though, and continued to test Wasps before they were undone by a piece of Umaga brilliance.

The 22-year-old weaved his way through Exeter’s defence, and touched down for a try – after referee Tom Foley had checked the grounding – with Gopperth’s conversion making it 13-0.

And before Exeter could recover from that setback, they fell further behind after fumbling possession in midfield and seeing Robson gather to sprint 50 metres and claim an opportunist score, again converted by Gopperth.

Exeter suddenly had a mountain to climb, and Wasps made it of Everest proportions on the stroke of half-time.

Patient build-up play reaped its reward, and when the Chiefs finally ran out of defensive numbers it was Gopperth who powered for his team’s third try and open up a 25-point interval advantage.

Wasps needed less than five minutes of the second period to secure maximum points, with Bassett enjoying an unmarked walk over Exeter’s line after a lengthy kick out of Wasps’ half saw the Chiefs with no defenders back.

Southworth marked his Premiership debut by claiming a consolation try for Exeter, but normal service was quickly resumed when Wasps stormed back into the Chiefs’ 22 and Vellacott scored.

The scrum-half quickly added his second try, and although Exeter kept battling, their shadow XV had suffered a comprehensive defeat.

We’ve only gone and bloody done it 😬

Elsewhere, Bristol secured a place in next weekend’s semi-finals after beating London Irish 36-7 at Twickenham Stoop.

The Bears’ bonus-point win, which saw them overtake local rivals Bath in the standings, was rarely in doubt as they scored five tries against an Irish who could not follow up their heroics in winning at Exeter last time out.

Semi Radradra, Ben Earl, Harry Thacker and Will Capon crossed for the visitors, who were also awarded a penalty try. Max Malins added the rest of Bristol’s points with a penalty and three conversions.

Irish could only respond with a second-half try from Ollie Hassell-Collins which Paddy Jackson converted.

Saracens departed the Premiership by firing a parting shot in the title race as Bath were held 17-17 at Allianz Park to leave them sweating on their qualification for the play-offs.

Leading 17-3 entering the final quarter after tries from Beno Obano and Ben Spencer, Bath looked set for a first win in north London since 2010 that would have guaranteed a semi-final, only to leak a penalty try and a 73rd-minute touch down by Tim Swinson.

A tricky conversion still needed to landed for the draw, but Manu Vunipola was on target in treacherous conditions.

It means that Sale can still qualify for the play-offs if they win their final match against Worcester, which is now controversially being staged on Wednesday.

Finally, Harlequins provided a fitting end to former England captain Chris Robshaw’s time with the club as they claimed a 32-26 bonus-point Premiership victory over Leicester at Welford Road.

Robshaw, 34, led his team out for his 300th and last appearance and played the full match as tries from Alex Dombrandt, Joe Marchant (two) and James Lang, along with 12 points by fly-half Brett Herron, saw the Londoners just get home.

But, after one of their worst seasons in living memory, second-bottom Leicester had pride to play for and they nearly spoilt Robshaw’s party.

The hosts scored tries through skipper Tom Youngs, Nemani Nadolo and Mike Scott, plus three penalties and a conversion from fly-half George Ford taking them close.