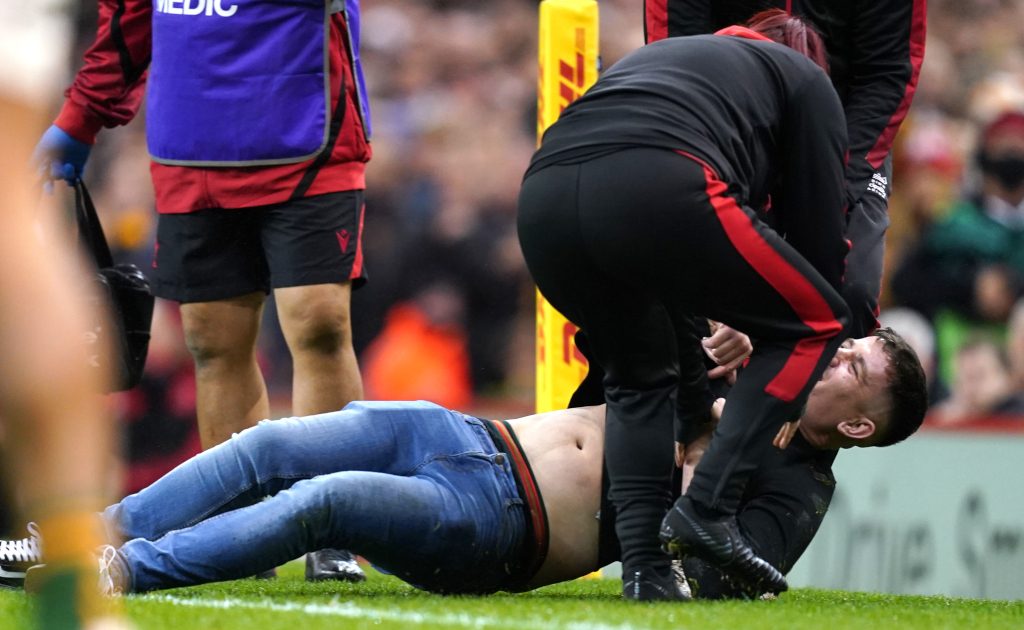 Wales boss Wayne Pivac admitted he wasn’t sure if his team would have crossed the whitewash had a spectator not invaded the pitch, but was left ‘disappointed’ by the incident.

The hosts were level at 15-15 during a physical encounter with the Springboks when it happened.

They were attacking down the left hand side and had a two-on-one overlap when a spectator ran onto the field of play.

Liam Williams had to jump over the pitch invader as he was pinned down and then led away by stadium security staff, although it appeared unlikely that Wales would have scored.

They would eventually succumb 23-18 to the world champions with that missed opportunity potentially proving costly.

Nothing the officials could do

“You don’t want to see that in the game. It’s very disappointing that happened, but there was nothing the officials could do about that.”

Pressed on whether Wales might have scored a try, Pivac added: “I don’t know. I don’t know.

“At the time, I thought, ‘here we go’. We had a one-man advantage. I haven’t had a chance to speak to the players.

“They might have been distracted, but there wasn’t much more the officials could have done. They’ve got to deal with that the way they did.”

Principality Stadium manager Mark Williams confirmed after the match that the spectator had been swiftly dealt with.

Williams said: “We condemn this type of behaviour in the strongest possible terms.

“He was intercepted and immediately escorted from the stadium and handed over to South Wales Police.”

Anyone idiotic enough to invade a Test match pitch should win a prize. They get to tackle Ellis Jenkins. Or Eben Etzebeth. Or Manu Tuilagi. Or Ben Tameifuna. Then the players get a go with them.

South Africa ultimately ended a run of four successive away defeats against Wales as they claimed a first win in Cardiff since 2013.

Despite being without injured captain Alun Wyn Jones and a host of other absent British and Irish Lions, Wales delivered a towering performance, with fly-half Dan Bigger kicking six penalties.

Handre Pollard kicked four penalties and Frans Steyn one for South Africa, yet Wales bounced back superbly from a 54-16 drubbing against New Zealand last weekend.

And their outstanding performer was flanker Ellis Jenkins, who suffered a major knee injury against the Springboks three years ago and had not played Test rugby since.

Reflecting on the game, Pivac said: “The guys put in a heck of a shift.

“If you look at the performance last week, coming up against South Africa in these conditions was always going to be a big ask, and I thought the boys came up well.

“We could have won that match – it came down to a couple of moments. We gave away a silly penalty before half-time, and then another to set up their try.

“Outside of that, we’ve a bit of work to do at the scrum, but we matched them across the park and led for periods. We could have won it at the end.

“It is a big step in the right direction, playing the world champions at their own game. I thought it was a big pat on the back for their effort.

“I think playing South Africa in those conditions, which is ideal for how they want to play the game, was going to be a testing time. I thought we stood up to that test well.

“It was a big tick in the box as far as the coaching group was concerned, but there are always things we need to take away and work on.

“If the (stadium) roof was closed or the sun was out, we would have definitely played more. But that ball was very wet and slippery.

“There was a lot of rain coming down in the pre-match warm-up, so we changed the tactics before kick-off. We had to go with the conditions.”

Reflecting on his team’s victory, South Africa head coach Jacques Nienaber said: “We are glad to break the hoodoo here.

“Our discipline was poor (in the first half). It’s something I thought we did well in the second half. We found solutions to that.”

Springboks skipper Siya Kolisi added: “We know the kind of team Wales are. It has always been tough when we play against them. We know they are going to go for 80 minutes.

“But we work really hard, and also I think it’s just a South African thing – we come from a country where people just don’t accept defeat.

“The people back home, we are very privileged to be able to do what we love and put smiles on people’s faces back home.

“We go through so many struggles, that people get so excited when we play. We know we’ve got 80 minutes, and whatever you do you can change someone’s mood in a couple of minutes.”

Taulupe Faletau on his way to Cardiff

The 30-year-old joins following a five year stint at Bath and will swap their Blue, Black and White for Blue and Black in the summer.

Faletau has been a dominant force at number eight since bursting onto the international scene in 2011.

He has gone on to win 86 Test caps for Wales and a further five during three Lions tours, including last summer against South Africa.