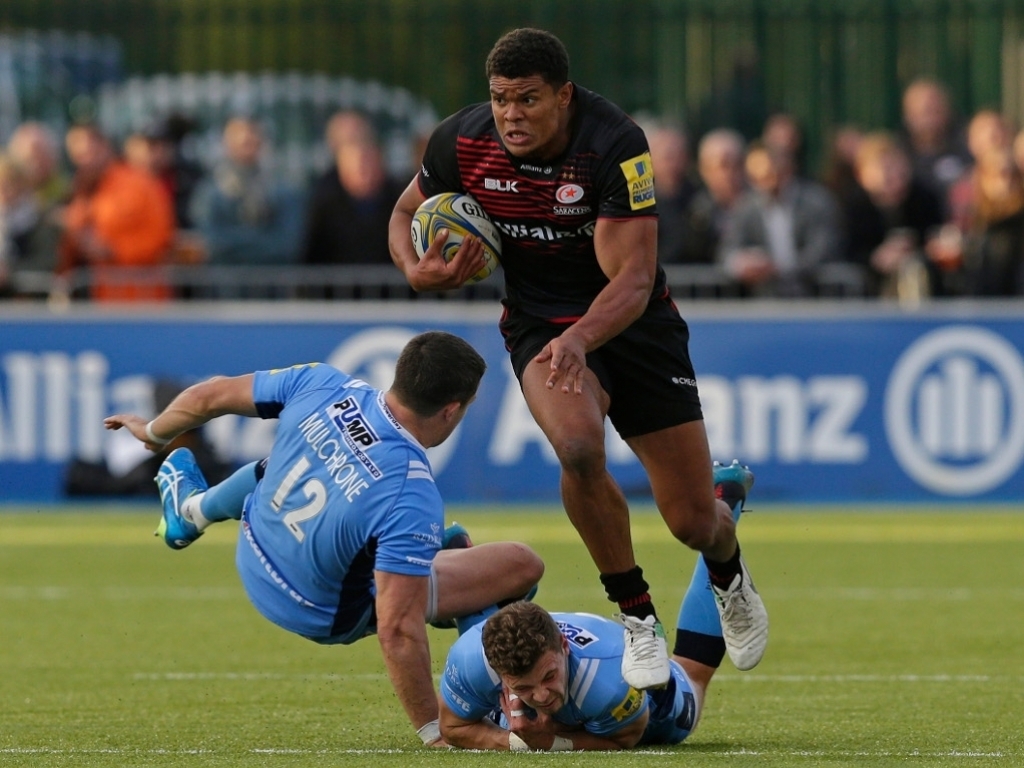 Wasps got back to winning ways at Northampton whilst there were bonus-point wins for both Saracens and Harlequins at home.

The Premiership freight train that is Saracens continued its forward momentum with a routine bonus point win against lowly London Irish.

Irish full-back Tommy Bell's boot opened the scoring before Mako Vunipola broke through the visitors defence to race over. Two Owen Farrell penalties and a further three points from the boot of Bell left the deficit at seven points when the teams left for the interval.

Fly-half Farrell notched the first set of points in the second period when he converted his own try after collecting a Liam Williams offload he sold a dummy to the Irish defence to dot down.

Both wingers helped the European champions secure the bonus point when Welsh flyer Williams extended his run of try scoring games to three before Chris Wyles continued his rich vain of form.

Replacement Nathan Earle notched his side's fifth when Wyles caused the Irish defence problems by coming off his wing before sending his fellow wing over the whitewash.

London Irish did briefly make the match a contest when captain Daivd Paice crashed over via a driving maul but the newly promoted side ended the match with a whimper as Earle was on the end of a slick move to score his side's sixth of the afternoon.

Wasps ended a miserable run of four straight Premiership defeats when they secured an impressive win at Northampton on Saturday afternoon.

After an initial trading of penalties had left the fly-half showdown Piers Francis 3-6 Jimmy Gopperth, Saints winger Ben Foden cut a great line to scythe through the Wasps defence and send Ahsee Tuala over to give the home side the lead.

Not to be outdone however, Foden's opposite number Christian Wade produced one of the moments of the match. Looking to exit their own 22 Wasps hooker Ashley Johnson sent the ball flying down the pitch and with no full-back at home Wade was able to win the foot race and dot down.

The winger then had the audacity to convert his own try with a memorable drop goal to send Wasps into the ascendency at the interval.

The visitors extended the lead early in he second-half when a huge team effort saw Johnson crash over. Two Francis penalties had bought Northampton to within touching distance but Josh Bassett was able to reaffirm Wasps authority on the contest when he crashed over on the hour.

Another Gopperth penalty pushed the gap out to 14 points and Dai Youngs' men seemed to be looking like their former selves again. South African Juan De Jongh scored his first try for his new side after Johnson's offload and despite Harry Mallinder's late score Wasps ran out bonus point winners.

Worcester produced their best effort yet in an attempt to end their winless start but Harlequins eventually proved too strong at the Stoop.

Fresh off receiving England appreciate status from Eddie Jones, Marcus Smith capped his memorable week when he dived through a gap to open the scoring after just three minutes.

The visitors hit back however when, first, David Denton provided a great support line to go over in the corner before Perry Humphreys chased down a hopeful punt to put the Warriors in front.

Things got even better for the Premiership's basement side when Josh Adams juggled the ball before managing to get it down in the corner. That was to be as good as it got however as Quins scored four unanswered tries to turn the contest.

Mat Luamana crashed over on the stroke of half-time to reduce the deficit. Danny Care put Quins into the lead when he benefitted from a poor Worcester scrum to pounce on a lose ball and dive over.

Jamie Roberts secured his side the bonus point midway through the second period when Harlequins found men out wide and the Welshman utilised his strength to power over. With Worcester looking lethargic winger Charlie Walker was able to find some holes in the visitors defence and some missed tackles meant he went over unchallenged.

Worcester were able to head back up north with something to show for their efforts however when they staged a terrific late fight back that saw replacement Dean Hammond cross twice before Jack Singleton cut the gap to six points within two minutes remaining. Quins held out however and Worcester left with two losing bonus points.