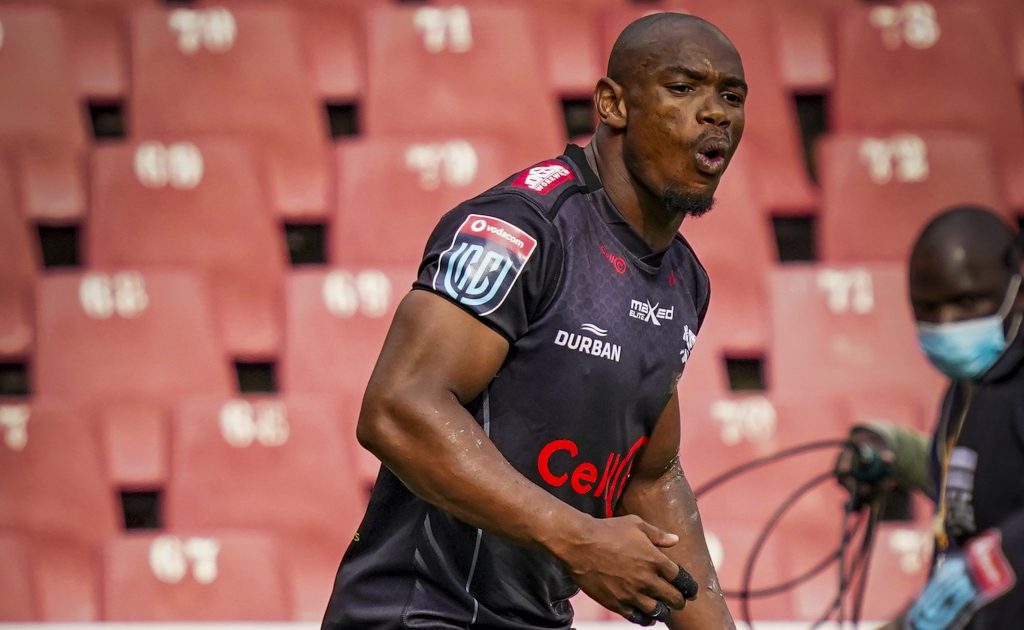 Sharks coach Sean Everitt has heaped praise onto Makazole Mapimpi after he scored a hat-trick of tries in the Durban-based side’s 47-37 United Rugby Championship win against the Lions in Johannesburg on Saturday.

Although the Lions lost the encounter they played some encouraging rugby but it was not enough to stop the Sharks’ free-flowing style of play.

Everitt was quick to hail the impact of his team’s players who have returned from international duty.

“The type of rugby you play is dependent on the players you have at your disposal. The likes of Mapimpi, Nkosi, Fassi, Lukhanyo (Am)… these are guys who can nail opportunities when they pop up out of nowhere, and that is what happened and it is why we won the game,” Everitt told IOL.

“Some of these guys are the best in the world in their positions,” the coach enthused. “Mapimpi must be the best left wing in the world. We talk about Cheslin Kolbe, and rightly so, but every time Mapimpi plays he gets over the chalk, domestically or internationally.

“Lukhanyo has been absolutely superb, he is probably the best 13 in the world. And it is great that they perform like this for their franchise — they want to pay back to us. Sometimes you get players that perform on the international stage but don’t come to the party for their clubs or provinces.

“But our Boks are great people and we are so happy to have them at the Sharks and to see the pride they have in playing for us.”

The style and execution of the Sharks’ play had similarities to when the Durban-based side was riding high in Super Rugby in 2020. Everitt was quick to highlight that their performance was based on a well-executed plan.

“When (Lions coach) Cash (van Rooyen) reviews the game he will see the same thing we did. Our plan was to put pressure on the Lions defensively because we felt they would overplay in the wrong areas of the field, so if we defended strongly we would get reward from it,” he added.

“But unfortunately we were also not tidy in our attack and gave them opportunities (the Lions scored five tries of their own). “If you look at when the Lions beat the Stormers, they forced 25 turnovers and won comfortably, so we were wary of that.”

The Sharks now turn their attention to Saturday’s coastal derby in Durban against the Stormers, who came off a famous late 30-26 win against the Blue Bulls on Saturday.

“Our frustration in the Lions game was in our kick-offs, both sending and receiving,” said Everitt. “Both teams were not good in that area. We were never able to get away on the scoreboard because of that, so it is a big work on for us.”