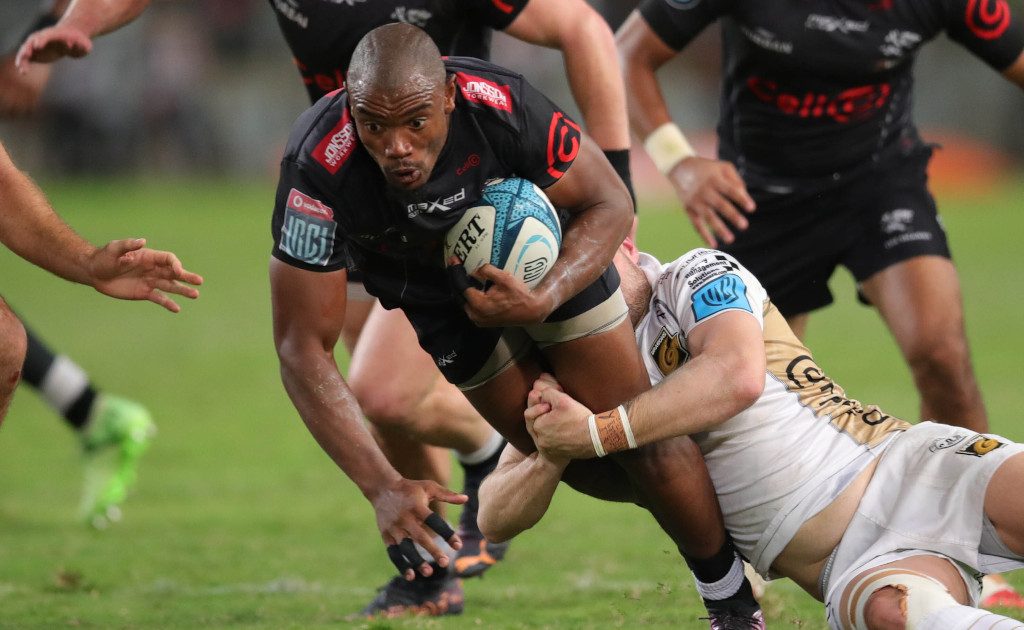 The Sharks breezed past the Dragons in their United Rugby Championship meeting in Durban on Friday, winning 51-3 in a one-sided fixture.

What made the loss worse for the visitors was the sight of Ross Moriarty leaving the field after 30 minutes with what looks like a serious knee injury.

In what was his first game back since the Six Nations, it was unfortunately cut short as the Dragons went on to suffer a heavy defeat in South Africa.

Ox Nche, Bongi Mbonambi and Werner Kok touched down for the Sharks before a pair of penalty tries – both for deliberate knock-ons – and an Anthony Volmink touchdown carried the hosts beyond the half-century with the help of 17 points kicked by Curwin Bosch.

Bosch booted the Sharks into a 6-0 lead with a pair of penalties as the hosts dominated the early stages before Josh Lewis halved the deficit in the 16th minute.

The margin was back to six by the end of the first quarter thanks to another three points from Bosch’s boot, but the visitors were dealt a blow when Moriarty departed.

The Dragons conceded the game’s first try soon after he was replaced by Taine Basham, with Nche driving over under the posts.

Bosch added the extras and was on target again after Mbonambi touched down from a driving maul in the 33rd minute.

Kok carved a route through the Dragons defence as he embarked on an unstoppable run to go over seven minutes into the second half, with Bosch taking the score to 30-3.

The bonus point was in the bag for the Sharks when a deliberate knock-on by Lewis was punished with a penalty try and 10 minutes in the sin bin.

Lewis Jones committed the same offence with the same outcome only five minutes later, temporarily reducing the Dragons to 13 men and extending the Sharks’ lead further.

Volmink scored the final try 13 minutes from time and Bosch moved the scoreboard beyond 50, while the Dragons were shown a third yellow card – this time for Ben Fry – before time was up.

Later on Friday, Glasgow hooker Johnny Matthews grabbed a hat-trick during a 40-12 win over Zebre Parma on an emotional night at Scotstoun.

Alessandro Fusco and Luca Andreani scored late in each half to give the Italians something to show for their visit.

There was a poignant precursor as the Warriors paid tribute to former player Federico Aramburu, who was shot dead in Paris a fortnight ago at the age of 42. The former Argentina back played for Glasgow during the 2010/11 season.

An Argentina flag flew and a Pumas shirt lay on the pitch during a minute’s applause as a group of the South American’s former team-mates, including Chris Cusiter and Ruaridh Jackson, lined up on the touchline.

Another of Aramburu’s former colleagues, Rob Harley, blew his cheeks out as he battled his emotions during the applause ahead of his 261st game for the club – and possibly his final match at Scotstoun. The 31-year-old announced earlier in the week that he would be departing in the summer.

The Warriors wasted no time in atoning for losing a 13-point lead in Cardiff last weekend.

Stafford McDowall’s kick into touch put the visitors on the back foot in the opening seconds and Matthews powered over in the fourth minute after a driving maul.

The front-row continued to do the damage as Kebble showed great footwork and strength to go over in the 10th minute.

Wilson added the third when he dived underneath two tackles and stretched to touch down on the line after replacement scrum-half Sean Kennedy had got the ball out of a halted maul in the corner.

Dobie – back on after a head injury assessment – got in on the act when he took the ball out of the back of the scrum and darted between two Zebre players in the 33rd minute.

The Italians had the final say of the half when Fusco intercepted opposite number Dobie’s pass inside his own half and sprinted for the line to make it 28-5 at half-time.

Glasgow could not add to their lead while Potu Leavasa was in the sin bin for a high tackle on Cole Forbes, but Matthews twice touched down during mauls either side of the offence.

Andreani finished well after a line-out in the 79th minute as the Parma men ended on a high.