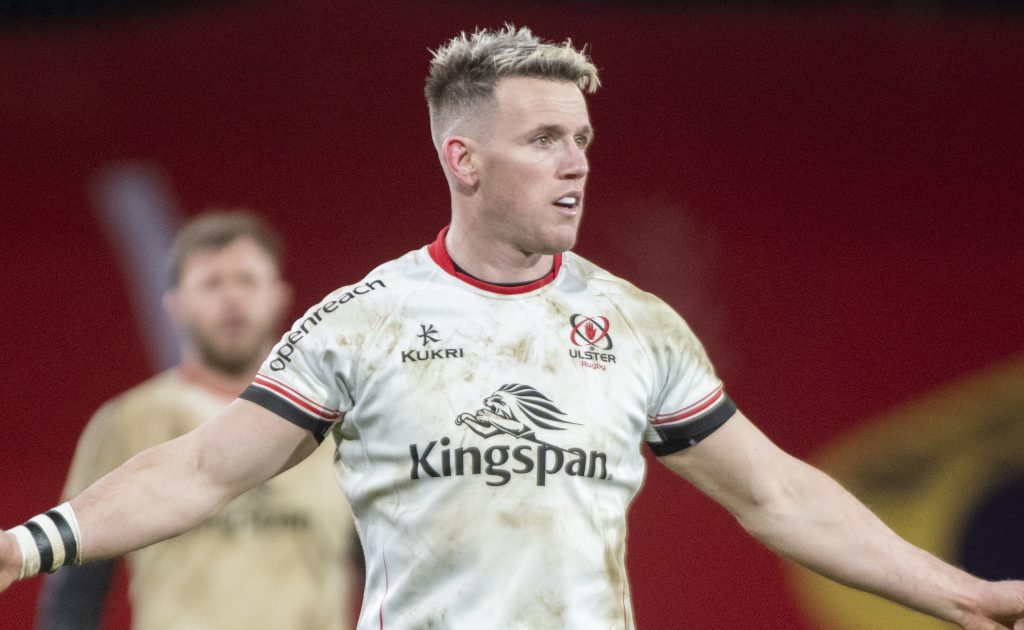 Ulster picked up a 27-15 victory over Scarlets at Kingspan Stadium that moves them provisionally second in the United Rugby Championship table.

There was nothing to separate the teams at the break as they went in 10-10, but the hosts came out firing with three second-half crossings seeing them win.

Their tries in the game came via Angus Curtis, Sam Carter, Gareth Milasinovich and Craig Gilroy while Samson Lee and Kemsley Mathias scored for Scarlets.

Nathan Doak opened the scoring for the home side with a penalty in the third minute before Dan Jones did the same to level the match.

Ulster were held up when John Andrew – making his first start of the season – was enveloped by Carwyn Tuipulotu amongst others just as the hooker attempted to wriggle through for the score.

Just after Gilroy was yellow carded in the 27th minute for a high hit on Tom Rogers, it was the visitors who went ahead when Lee muscled over from close range.

Jones kicked a great conversion and Scarlets deservedly led 10-3 after playing with more verve and ambition.

But Ulster struck back and, still with 14 men, ran a kickable penalty which allowed Curtis to dot down near the posts, after Duane Vermeulen made the initial ground.

Doak’s conversion tied the scores just before Gilroy returned and the half ended with Jones missing a long-range shot at goal.

Tyler Morgan’s early break could have resulted in another Scarlets score only for Shaun Evans to knock on.

Ulster then responded when Ethan McIlroy broke a tackle, found space and fed Doak, whose kick through to the line was covered by Ioan Nicholas.

The hosts had their second try in the 52nd minute when Carter broke through from close range, though Doak missed the extras.

Then a huge set from the resultant scrum eventually ended in Scarlets replacement prop Mathias reaching the line.

Evans missed the conversion and the scores were tied at 15-15.

Ulster hit back in the 65th minute from Milasinovich’s effort, which was converted by Doak.

The bonus point was secured shortly afterwards when Gilroy touched down.

Dragons and Benetton play out draw in Newport

Dragons were unable capitalise on Benetton’s raft of absentees as they were forced to settle for a 13-13 draw in a match they could have lost at the death.

The Welsh region were firm favourites to claim only a second win in their last 15 outings and their first home victory since April 25 with Benetton missing 23 players through international call-ups.

However, the Dragons not only had to be content with a draw after fighting back from 10-0 down, but they might easily have ended up defeated as Benetton fly-half Tomas Albornoz’s last-gasp penalty fell short after Wales hooker Elliot Dee was sent off in the final minute for a dangerous challenge.

Ross Moriarty scored Dragons’ sole try with Sam Davies adding the conversion and two penalties but the hosts were unable to claim victory as they made too many unforced errors in a game of poor quality.

Corniel Els was Benetton’s try-scorer with Albornoz kicking two penalties and a conversion.

After a scrappy opening, Benetton had the first chance for points and Albornoz made no mistake with a 30-metre penalty.

That was the only score of a very poor first quarter in which neither side threatened the try-line. Dragons were marginally the livelier but careless forward passes in promising positions prevented them from benefitting.

A chip and collect by Albornoz was the only piece of skill shown in that first 20 minutes and the outside-half soon had a chance to extend Benetton’s lead with a second penalty, but the Italians elected for an attacking line-out.

It paid immediate dividends, though, as hooker Els forced his way over, with a conversion from Albornoz giving the visitors a 10-point advantage after 23 minutes.

Dragons looked to respond and an excellent kick and chase from Sam Davies won his side a rare platform in the opposition 22, but poor ball retention again proved the Welsh team’s downfall.

However, with the last kick of the half, fly-half Davies gave his side some encouragement when he slotted over a penalty to leave them trailing 10-3 at the interval.

Three minutes after the restart, the hosts were level thanks to a costly mistake from the Italian defence.

The visitors took an age to deal with a speculative kick from Sam Davies before their full-back Giacomo Da Re knocked on to give Dragons a five-metre scrum, from where Moriarty crashed over.

Albornoz and Davies exchanged penalties to leave the scores tied at 13-13 and set up a tense last 10 minutes.

Davies and Albornoz attempted long-range drop goals but both were off-target before Dee was sent off in a dramatic finish, where Albornoz just failed to snatch victory for Benetton.