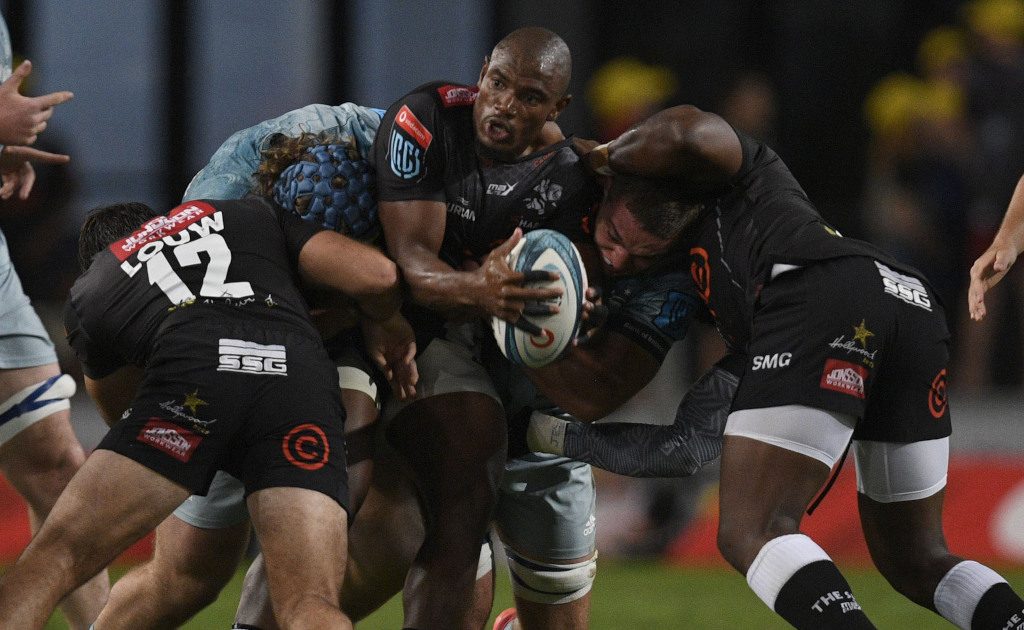 The Sharks denied Leinster an opportunity to wrap up top spot in the United Rugby Championship with two games to spare in a hard-fought 28-23 win in Durban.

Leo Cullen’s men came into the fixture with an eight-point advantage over closest challengers the Stormers and extending that margin beyond 10 would have been enough to earn the top seeding ahead of the play-offs and clinch the Irish Shield.

However, the visitors had to make do with a losing bonus-point at Kings Park after a late onslaught failed to deliver the winning try.

Scott Penny and Tommy O’Brien had crossed for Leinster in the first half, although the tries were cancelled out by Makazole Mapimpi and Jaden Hendrikse respectively, with the visitors holding a 17-14 lead at half-time.

The Sharks kicked on in the second half with scores from Bongi Mbonambi and Phepsi Buthelezi as Leinster paid the price for a pair of yellow cards.

Curwin Bosch missed a couple of early penalties before Penny burrowed over for the game’s opening try in the 17th minute, converted by Ciaran Frawley.

The Sharks responded almost immediately through Mapimpi’s interception try and Bosch found his kicking boots to open his account with the conversion.

A Frawley penalty nudged Leinster back in front before O’Brien’s touchdown put daylight between the sides.

O’Brien stepped inside Aphelele Fassi’s attempted tackle and outpaced Werner Kok to race over, with Frawley adding the extras.

Having failed to halt O’Brien moments earlier, Fassi was the architect as the Sharks reduced the deficit to three in the closing stages of the half, splitting the defence open and feeding Hendrikse to run for home.

Frawley kicked a penalty early in the second half as the rain grew heavier but the Sharks had the lead after Mbonambi touched down from the back of a driving maul. Bosch converted despite the ball persistently slipping from the tee due to the weather, making it 21-20.

The advantage lasted only two minutes thanks to another Frawley penalty but Leinster quickly lost Josh Murphy to the sin bin and were temporarily down to 13 when debutant hooker Lee Barron saw yellow shortly after the hour.

The Sharks made their man advantage count after Murphy’s return, with Buthelezi barging his way over from a maul after an extended period of pressure and Bosch converting.

A TMO review for a potential Bosch try eventually determined that Fassi’s final pass had gone forward, although the full-back’s foot appeared to be in touch before that point – an infringement flagged by the linesman but dismissed by the TMO.

The Sharks then had Kerron van Vuuren sin-binned as they desperately defended their lead late on but Leinster were held up over the line with their last chance to clinch victory.

The Ospreys pulled clear after the interval to earn a 22-6 victory over Cardiff in their Welsh derby at the Arms Park.

Cardiff had led 3-0 at the end of a low-scoring opening period in the capital, with Rhys Priestland’s 27th-minute penalty the only points either side managed to get on the board.

However, the Ospreys broke clear after the break, with Dewi Lake, Rhys Webb and Sam Parry all going over for a win that leaves them nine points behind URC Welsh Shield leaders the Scarlets ahead of next weekend’s west Wales derby in Swansea.

Another Priestland penalty was all the hosts could muster in the second half as they slipped 11 points adrift of their visitors.

Scarlets claim revenge over the Dragons

The Scarlets stayed in the hunt for the United Rugby Championship play-offs with a 38-19 bonus-point win over the Dragons at Rodney Parade.

Tries from Sam Lousi, Angus O’Brien (2), Ryan Elias, Rob Evans and Corey Baldwin, along with eight points from the boot of Rhys Patchell, were enough to get Dwayne Peel’s side over the line.

This Scarlets victory was revenge for last Saturday where Dragons won the reverse fixture at Parc y Scarlets.

Connacht moved one win away from completing a clean sweep of the United Rugby Championship’s South African sides as they edged the Lions 33-30 in a thrilling contest in Johannesburg.

The Westerners saw off the Bulls and the Stormers at home earlier in the season and Saturday’s victory at Emirates Airline Park was just the second win by a northern hemisphere side in South Africa this season.

It was Carty who carried the visiting Irish side, nailing four penalties and two conversions to go along with tries from Cian Prendergast and Tom Daly.

Earlier, the Bulls were made to work hard for a 46-29 United Rugby Championship victory over Benetton at home.

Benetton were shock 35-8 winners when these sides met for the first time in last season’s Rainbow Cup final in Treviso but were not fancied to repeat the feat on South African soil.

However, Marco Bortolami’s men dominated the early stages at Loftus Versfeld, opening up a 13-0 lead thanks to a Tommaso Menoncello try and the boot of Rhyno Smith.

Cyle Brink and Kurt-Lee Arendse went over before half-time to reduce the deficit to 16-12 before a second Arendse touchdown and more from Marcell Coetzee, Canan Moodie and Simphiwe Matanzima saw the Bulls to a bonus-point win.

Menoncello added a consolation after Niccolo Cannone had been red-carded for a closed fist to the chin of Arno Botha.