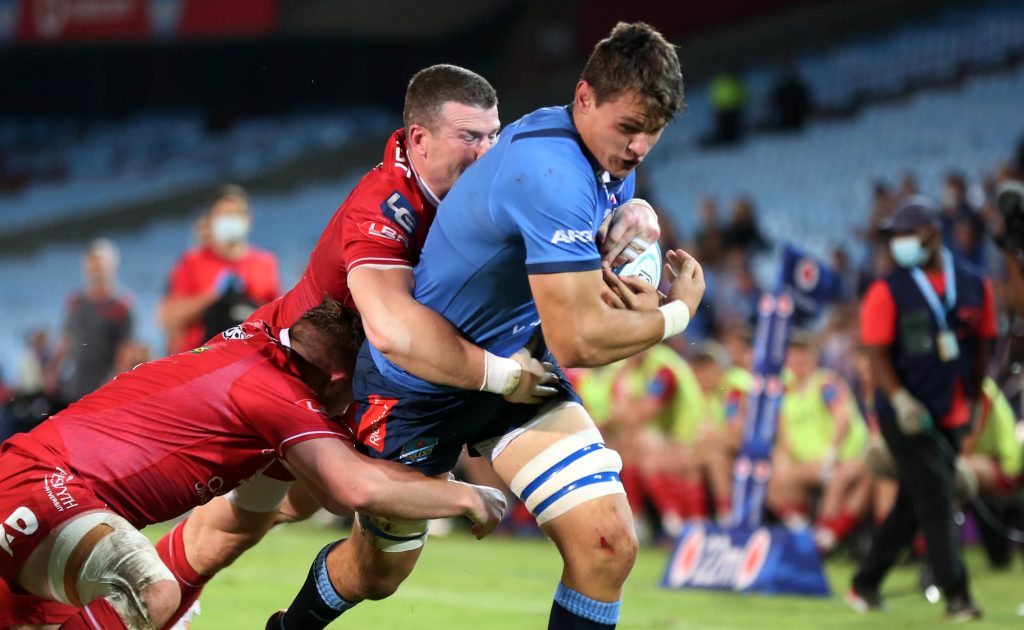 The Bulls ran riot against the Scarlets to pick up an impressive 57-12 victory over the Welsh region in their United Rugby Championship clash in Pretoria.

The South Africans had scored five tries – through Canan Moodie, Marcell Coetzee, Cyle Brink, Johan Grobbelaar and Elrigh Louw – by the time Sione Kalamafoni went over for the Scarlets eight minutes from the interval.

Ruan Nortje and Grobbelaar extended the Bulls‘ lead with the visitors temporarily down to 14 men early in the second half, and Coetzee and Robert Hunt carried their side’s try tally to nine before Rob Evans’ late consolation.

The result lifts the Bulls to sixth in the overall table and top of the South African Shield ahead of the weekend’s remaining fixtures, while the Scarlets remain 12th.

It took little over a minute for the Bulls to score the game’s first try, with Moodie collecting a brilliant Louw offload to go over out wide.

Dwayne Peel’s men were being given the runaround by their hosts and a wonderful exchange of passes between Kurt-Lee Arendse, Madosh Tambwe and Cornal Hendricks, followed by a Chris Smith cross-kick, put the Bulls deep in Scarlets territory, with Coetzee eventually touching down.

Brink burrowed over for the Bulls’ third in the 14th minute after a driving maul put the home side on the Scarlets’ line.

If there was any crumb of consolation for the visitors, it was that Smith – who ultimately contributed 10 points to the Bulls’ cause – was not taking full advantage from the tee, converting only one of the opening three tries.

But the fly-half could hardly have asked for an easier kick after Grobbelaar wrapped up the bonus point in the 25th minute by powering over next to the posts.

Louw added a fifth and, although Kalamafoni responded before half-time, a Ioan Nicholas yellow card in the opening minute of the second period was punished with further Bulls tries from Nortje and Grobbelaar – the latter following more great passing from the hosts.

Coetzee wriggled through a fatigued Scarlets defence for the Bulls’ eighth, and Hunt completed the home side’s scoring before returning Wales prop Evans went over with the last action of the match.

Elsewhere, Glasgow flanker Tom Gordon scored a double before limping off as the Warriors beat Edinburgh 30-17 at Scotstoun.

The crucial moment proved to be a breakaway try from Josh McKay in the 56th minute which saw the home side go on to dominate and move into third place in the United Rugby Championship, as well as taking the lead in the 1872 Cup and strengthening their grip on the Scottish/Italian Shield.

With a total of 15 players from the two sides in Scotland’s 23-man squad for the final Six Nations clash against Ireland, there was a different feel to the derby, which was rearranged after a Covid-19 outbreak in the Warriors camp put paid to the festive double header.

Both teams were locked on 39 points before the game and were evenly matched until McKay’s try.

Glasgow went for the jugular from the start and might have scored even earlier than their ninth-minute opener.

A stolen line-out and a deliberate knock-on from Edinburgh winger Emiliano Boffelli, who escaped a yellow card, held up Warriors before the combined efforts of Henry Immelman and Matt Currie stopped Cole Forbes going over in the corner.

The breakthrough came from some close-range pressure when Gordon wriggled over.

Glasgow’s failure to deal with Edinburgh’s kick-off ensured they could not build on their lead, which had been extended by Duncan Weir’s conversion. Jack Dempsey let the ball bounce and McKay’s kick was charged down behind the try line, and Young converted the resulting pressure in the 14th minute despite Johnny Matthews’ efforts to hold the ball up.

The Warriors got back on top, although they had to be smart to stop Henry Pyrgos scoring on a counter-attack, and it was a mistake from the visitors that led to the third try of the game in the 29th minute.

Jaco van der Walt’s kick was flat and short and straight into the hands of Sebastian Cancelliere. The wing fed Stafford McDowall, who set up Gordon to go over after a dummy.

Edinburgh responded well again and McKay did well to hold up Currie after the centre burst through the lines. Edinburgh cut the gap through Boffelli’s penalty, but Weir restored the hosts’ seven-point lead just before the interval.

Edinburgh re-started strongly and benefited from a second penalty in quick succession when Venter went over. Boffelli levelled the scores.

The game turned on Cancelliere picking up a loose ball inside his own half as Edinburgh attacked. The Argentinian wing drove forward and infield knowing that McKay was overlapping and his no-look pass left three Edinburgh players exposed as the full-back ran up the right wing to cross.

The Warriors got some more control of the game, with substitute Ross Thompson’s kicking adding eight further points as well as keeping Edinburgh on the back foot.