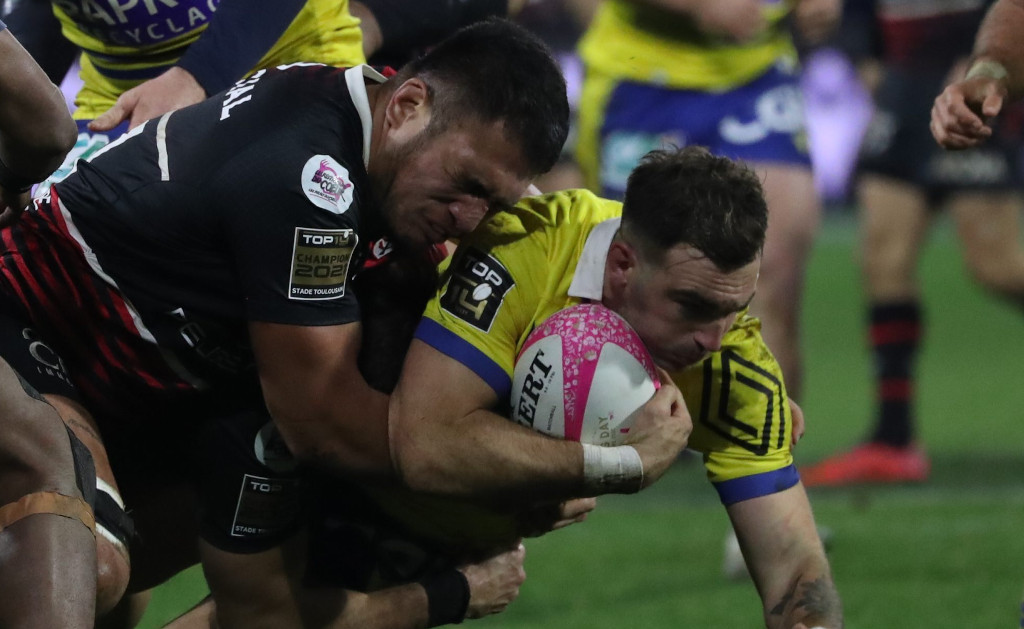 On a high-scoring weekend in the Top 14, Toulouse’s failure to open up a stubborn Clermont defence meant that Union Bordeaux Begles opened up a five-point lead at the top.

With points keeping scoreboards ticking over all over France, Clermont’s 16-13 win was a bit of an anti-climax, not least because, with a try apiece in the opening quarter, both teams entered the fray looking to attack.

Both defences were aggressive in fact, which led to a disjointed encounter featuring many a turnover and defensive penalty. Thomas Ramos converted one for Toulouse to give them a half-time lead and missed another.

Clermont pivot JJ Hanrahan levelled things early the the second half, the cue for both teams to smash themselves to bits on each other’s defence for a while, but only when Camille Lopez was brought on for Hanrahan was the deadlock.

First Lopez landed a drop goal and then with Toulouse attacking from deeper, he landed a penalty. Ramos pulled one back late, but it wasn’t enough for a Toulouse side who looked tired in the final quarter.

Bordeaux Begles also wilted towards the end of their match against Biarritz but held on for a 30-27 win. The hosts led 25-6 and were cruising with 13 minutes to go, after an early try from Louis Picamoles was backed up by tries from wing Federico Mori and centre Ulupano Seuteni.

In a frantic finale – including an unfortunate incident in which a Canal+ cameraman suffered a horrendous leg break after being caught by a stray player – both teams chased bonus points, swapping tries in the process, but the visitors scored two more tries in the final two minutes to leave Bordeaux coach Christophe Urios fuming on the sidelines despite the win. He later lambasted his team, playing its first game in three weeks, for a ‘lack of character’.

In an even more exciting finale, Castres recovered from a catastrophic first quarter to beat La Rochelle 31-30 in the best game of the day.

Early scores from Dillyn Leyds and Uini Atonio (when a prop pops up to finish a break by a fly-half you know things are going well) were added to after 23 minutes by centre Julien Favre as the visitors tore the home side apart.

But tries from Filipo Nakosi and Martin Laveau – Laveau’s a real gem – before half-time saw the hosts get into the game and despite a brace of penalties from Ihaia West early in the second half, La Rochelle also looked to run out of energy as the game went on.

Lock Florent Vanverberghe’s try, converted by Benjamin Urdapilleta, got Castres to within touching distance on the hour mark before centre Vilimoni Botitu’s surge through the heart of the La Rochelle defence – the try converted by the ever-reliable Urdapilleta – gave Castres the lead.

La Rochelle got the chance to win it, but West pushed an eminently kickable penalty right to send the home crowd into delirium.

But the finale of the weekend was in Lyon, where the home side started and finished the match with tries to beat Racing 37-35, leaving the Racing coaches to lament his team ‘playing Santa Claus’ at times. Fly-half Leo Berdeu opened the scoring with a 20m dart after two minutes, but Juan Imhoff equalised and Maxime Machenaud converted to give Racing a two-point lead.

The two kickers traded penalties and only Berdeu’s missed conversion separated them at 16-14 late in the first half, but Berdeu then took an offload and completed two full pirouettes through the defence on the way to his second try, this one under the posts. There was still time for Machenaud to make the score 21-19 at the break with his fourth penalty.

Neither side let up in the second half, with Berdeu extending the lead before Camille Chat crashed over and Maxime Machenaud gave Racing the lead once again with the conversion.

From the restart, Racing tried to go wide, but a dreadful long pass out wide went loose and was seized upon by Thibaut Regard. Lyon back in the lead.

But from deep, Regard took an offload on the left wing and tore into the Racing 22. Two inside passes later it was Baptiste Couilloud who crashed over for the winning score in a magnificent game.

Elsewhere, Perpignan looked devoid of inspiration and in deep relegation trouble as they lost 27-17 at Stade Francais, while Pau thrashed a lifeless Brive 43-20. Toulon’s match against Montpellier fell foul of Covid, but given the drama on show elsewhere, nobody really missed it!

Bordeaux are clear of Toulouse at the top, and should Montpellier win their game in hand, Toulouse will slip to third. At the bottom, Perpignan and Biarritz are still in the relegation zone, but do not bet against Brive being sucked into that battle, so awful were they on Saturday.