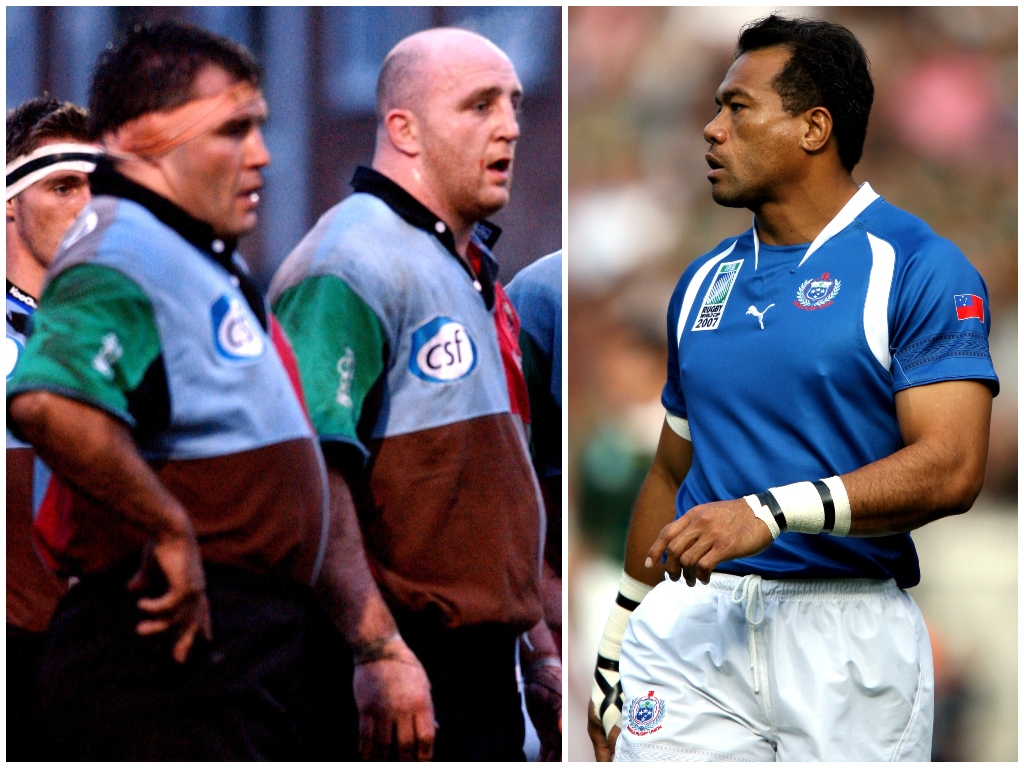 All who have played the great game of rugby knows that until you’ve acquired an official nickname within the club you play, you’ve not really yet made it.

A nickname is the rugby equivalent of a made man in the Mafia; it means acceptance by your peers, it is a mark of respect that allows you full ‘banter rights’ with the senior members of the team and, if you’re very lucky, it becomes synonymous with your very career, a soubriquet that identifies you with one (or two) simple words.

We’ve taken some time out to choose our favourite monikers from throughout the ages, seeking the most memorable and original and taking great care to remove simple abbreviations of names such as ‘Johnno’ ‘DC’ or ‘Gar’. We’re aware we may have missed a few favourites and have done our best to cover all the nations, but feel free to add any we’ve missed in the comments below.

When someone refers to themselves by their own nickname, you know it’s stuck like glue and regular Planet Rugby contributor and Newcastle Falcons defence coach Easter is known the length and breadth of the game simply as ‘Minty’ – coined by England centre Will Greenwood due to an alleged resemblance to the Eastenders character of the same name.

Continuing our soap opera theme, we get to the brilliant Welsh full-back Williams. However, the name didn’t come from rugby, but more so his family whilst on holiday in Scotland, who thought their relative resembled Sanjay Kapoor, like Minty, a character in Eastenders.

Arguably the greatest back-rower produced by the emerging nations (alongside Japan’s Michael Leitch) the mighty Georgian number eight stands 6’5″ tall and weighs in at some 120kgs, resembling the towering figure of Godzilla, a 1954 cartoon character from Japanese literature. With a staggering 27 tries in his 75 caps, we’ll wager that Mamuka is a little quicker around the paddock than his namesake.

When you read this, you’ll probably realise for the first time that the great Scot’s first name is actually George! However, the simple truth here is that Dod is Scots slang for George and his nickname has stuck like glue ever since school days. We know we said we’d not use name derivatives, but here at Planet Rugby we’ll do anything to shout out Doddie as he continues his amazing fight against MND.

Former Samoa centre Lima was so bone crushing in contact and tackle that he was said to rearrange the spines of those that dared to come into his midfield territory. No-one knows who first coined it, but Bill McLaren immortalised the phase in reference to a tackle by Lima on Emyr Lewis at Cardiff in Western Samoa’s famous victory against Wales in the 1991 Rugby World Cup.

The word ‘rikishi’, borrowed from Japanese ‘Sumo’, literally means wrestler and that in itself would be justification for its application to the great Irish tighthead Tadhg Furlong. However, the truth is that he gained the nickname due to a resemblance to a WWE Wrestler of the same name, who, like Furlong himself, ‘liked to flash his belly’. In recent years, Furlong has also attracted the nick ‘Jukebox’ – as he has ‘all the big hits’.

The ex-England centre started his career down at Leicester Tigers whilst the great Irish full-back, Geordan Murphy was still in residence at number 15. Murphy kept calling young Billy ’36’ and when questioned why, he simply replied, in a deep Leinster brogue “Well, of course, my maths teacher always taught me that 12 x ‘trees’ are 36!”. Rightly or wrongly, it stuck like glue and became one of the most original nicknames on the circuit.

Wallaby flank Pocock’s upper body is so well developed and so powerful that his team-mates believed he resembled Bam-Bam, the strong-arm son of Barney Rubble, in the TV show The Flintstones. Word is that Pocock’s propensity to hammer his colleagues hard in training cemented the name, in reference to Bam-Bam’s clumsiness.

Former Leicester Tigers and England prop Graham Rowntree is a rugby legend; ABC Club member, British & Irish Lion, coach and scrum guru. His hair (in his early days, when he had some) grew at so many angles and in so many directions at once that former Tigers flanker ‘Dosser’ Smith thought he truly must be wearing a wig!

Jones is regarded in New Zealand as the third greatest All Black in history behind Colin Meads and Sean Fitzpatrick, and was a genius of a flanker who won the inaugural Rugby World Cup in 1987. Named Iceman or just Ice because of his calmness under pressure by Auckland coach John Hart, he held strong Christian beliefs and refused to play on Sunday. When asked how a Christian could be such an uncompromising tackler, he calmly quoted a phrase from the Bible: it is better to give than receive!

🗣️ "Nobody ever found out, so Clive, if you're reading this, sorry!"

A regular columnist on Planet Rugby, people believe Moody’s complete disregard for personal safety on the rugby pitch and fearless (some might say clinically insane) performances in the colours of Leicester and England saw him coin the reference ‘Mad Dog’. However, those in the know at Welford Road suggest it came from a rather intense summer training session in Portugal where the only person who would venture out on the pitch in the midday sun was ‘Mad Dog’, the Englishman.

At only a shade over 5ft 8in, Scottish prop McLauchlan was initially deemed too small by some to succeed in international rugby. Earning his nickname through his superb scrummaging technique, the man known around the globe as ‘Mighty Mouse’ became one of only five men to play in all eight Lions Tests in the glory years of the 1971 and 1974 tours.

Mean, moody and magnificent means magical monikers and in Chabal’s case, his nickname stuck like glue during the English part of his career. Known previously as ‘l’homme des cavernes’ (the Caveman) for obvious reasons, his move to Sale met with a lack of enthusiasm to adopt the French language form and he became simply ‘Sea Bass’ to all.

For a man that also answered to the call of ‘Uncle Fester’, it’s safe to assume that the great Irish hooker’s folical challenges are the inspiration to his nicknames. Wood’s bald head, cheeky smile and courageous play became iconic through the 1990s and 2000s and rumour has it that the name originated in a Kangaroo Court session when Wood became ‘Judge Raging Potato’ but Planet Rugby cannot officially confirm nor deny this.

One of rugby’s greatest characters, the former Western Force and Wallaby wing had a cult like following in Perth and Australia and we saw on numerous occasions his supporters turning up to matches in Cummins wigs, cheering on their favourite player over the years. His turn of phrase in interviews was a breath of fresh air in an age when elite players are often petrified to say what they want, while his nickname, ‘The Honey Badger’, is equally brilliant and befitting of the man. Cummins is a real admirer of the animal and its workrate and fearlessness, which is how he modelled his game on a rugby field as he never stopped fighting for metres and earned many fans around the world because of it.

Unconfirmed word is that Nick Mallett first thought of calling Mtawarira ‘The Beast’ as a testimony to his ability to transform from the charming and engaging mild mannered family man you meet off the pitch to the monstrous propping warrior that rises to the big occasion, producing match defining performances time and time again. A peerless scrummager and arguably the greatest loosehead in the history of the game, his carrying in the loose and power in the tackle are always accompanied by chants of “BEEEEASSSSTTTTT” wherever he plays around the world.

We cheat a little here, because the soubriquet of the great Aussie skipper, Eales, was one coined by the media, not the team. Famously nicknamed “Nobody” as nobody is perfect, except for maybe this great Wallaby. Eales played 112 times for Queensland and 86 for Australia, of which 60 were as captain, winning the World Cup in both 1991 and 1999. Eales was known for his height, strength, skill and ability in the scrum and lineout, whilst also being a superb kicker, ball-handler and leader – an unusual rugby combination, but one that’s as close to rugby perfection as anyone, or even Nobody, gets.

The nickname ‘Pinetree’ was given to the great All Black Meads by team-mate Ken Briscoe when he toured Japan in 1958 with the New Zealand U23 team. At 1.92 m tall and tipping the scales at 100kg, Meads was not much bigger than many of his fellow players – the name was more a recognition of his overall presence and lineout skill. After making his debut in 1955, Meads played his entire provincial career – 139 games – for King Country. He became an All Black on the 1957 tour of Australia, playing in both Tests not in his preferred position of lock, but as a flanker and number eight. His son Glynn, who later played rugby for King Country, became known as ‘Pinecone’.

For those that have met the barrelled bodied former England loosehead, Leonard, it’ll come as no great surprise that his teammate Martin Bayfield coined the name ‘The Fun Bus’ for Leonard whilst on tour together in South Africa in 1993 and it has stuck ever since. Said to reflect his post-match personality and propensity for leading the social touring around the local hostelries, Leonard has even monetised his moniker and owns a private hire vehicle aptly named ‘The Fun Bus’ to take clients out around London – with the number 114 (Leonard’s appearance count) proudly on the front of it.