Home Top 14 Top 14: The Bouclier de Brennus and a night of farewells 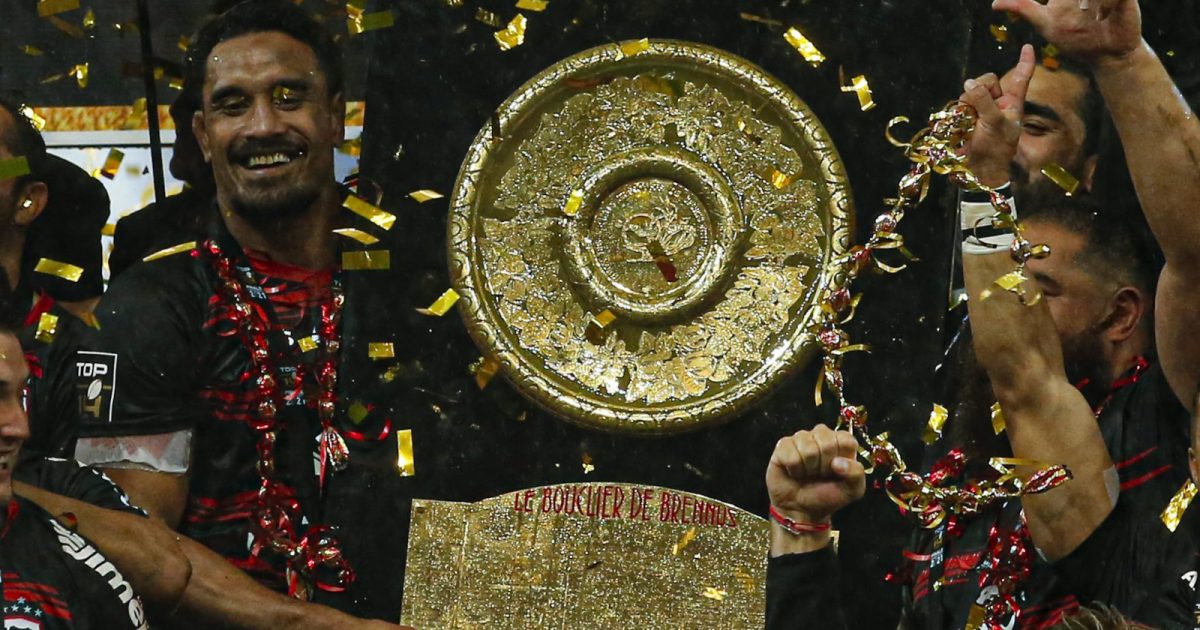 Two teams meet in the final of the Top 14 on Friday, two teams matched on the pitch but which could not be from more different backgrounds.

For Montpellier, the hour nears. After years scrapping around in the French top league’s lower reaches and constantly flirting with relegation, a spanking new stadium and ownership by business magnate and writer Mohed Altrad saw the club’s fortunes turn in 2011.

An unlikely final appearance in 2011 – on the way to which they beat Friday’s opponents Castres in the play-offs – was a sign that things had turned. There were two treasured Challenge Cup victories in 2016 and 2021 against Harlequins and Leicester respectively, while there was also a Top 14 final appearance, and defeat, in 2018 (more on that in a while), but there has been turbulence too.

A time of development under Fabien Galthie should have been continued under Jake White, but the South African coach failed both to fit into the local culture and to develop local players, leading to a reasonably open revolt. It also led to the end of the road for long-serving locally-raised players such as fly-half Francois Trinh-Duc and alienated a number of the local fans.

Vern Cotter steadied the ship for a while, including the final appearance in 2018 and the development of a number of local players, but there was a feeling the team needed a new – and French – impetus in 2020. With media reports swirling, Cotter abruptly left his post to allow Philippe Saint-Andre a running start.

The former French international wing and coach had not had much luck since he fell out with his national team players at the 2015 World Cup, but he was a catalyst on the south coast. Not only did results pick up, but also the ‘Frenchness’ of the team was restored, much to the delight of the locals.

His willingness to give players free run and to speculate on ball-players such as Zach Mercer has seen the team develop into a significant European-level team which more than played its part in a breathless Champions Cup win over Harlequins this year, by the odd point in 119.

Their European adventure came to an end against eventual champions La Rochelle, but it has been significant that Saint-Andre has not been shy of rotating his squad at any time – including in those games against Quins – which has left them fresher than many counterparts, both during and towards the end of a murderously long season, not to mention helping some fringe players develop at a tremendous lick.

It’s not a French club of long tradition, having only been founded by a merger in 1986, but it has been a breeding ground for many of France’s more recent international stars, and the final will be a special end to a career for one of them: flanker and club talisman Fulgence Ouedraogo, whose 17 years at the club could end with the biggest of bangs on Friday. Others are also taking their leave of the Heraults: long-serving scrum-half Benoit Paillauge, hero of the 2020 Challenge Cup final, and popular hooker Guilhem Guirado are set to leave and retire respectively. Guirado was in tears after the semi-final win over Bordeaux, and has been vocal about how much this win would mean to him.

But Montpellier are not the only club with a talisman to wave goodbye to, nor are they the only ones with a unique slant to their story. Castres are too established now to be considered pure minnows, but a commune of a mere 41,795 souls should, in a normal world, not be dining at the same table as a city of nearly 800,000. Indeed Montpellier’s student population alone is nearly twice the entire population of Castres.

Rugby runs deep in the Castres psyche and culture. The team has been champions of France five times, twice shortly after World War II, then in 1993 in a final laced with controversy against Grenoble, and then twice in recent times, in 2013 against Toulon (who got revenge a year later) and in 2018 (more on that in a moment).

2013 was a deeply emotional summer for the club. After an against-all-odds win against Toulon’s galacticos, the team’s owner Pierre Fabre, who was also the town’s major benefactor with a giant pharmaceutical company headquartered there and had owned the club for 30 years, passed away a month later. The stadium was promptly renamed after him, and the company and club are likely to remain entwined for eternity.

Castres has never been able to roll with the giants on all fronts. The club regularly qualifies for the Champions Cup and just as regularly crashes out early on. Big names are in short supply, generally the teams of the past few years have been cobbled together using misfits and nearly-men from other teams and countries.

One such was South African scrum-half Rory Kockott, who left South Africa both cursing the intransigence of the national team coaching staff that refused to trial him despite his obvious talent, but also, if we’re honest, a bit of a temper problem.

Kockott slotted into French small-town life so well that he actually became French, and ended up playing 11 times in blue. But it is his eleven years in Castres, featuring 220 appearances and 1,297 points, and a 2012-13 season in which he played almost every game and scored a killer try against Toulon in the final, that will be celebrated on Friday, even if current coach Pierre-Henry Broncan has all but ruled out any chance of his selection.

Kockott has two winners’ medals though, and here we are, at the gates of the 2018 final. Montpellier were hot favourites, with fine players from all of New Zealand, Australia and South Africa in their starting line-up. Aaron Cruden was at fly-half, opposite him was a less-known international fly-half from Argentina called Benjamin Urdapilleta. At scrum-half there was Ruan Pienaar, who had kept his opposite number Kockott out of teams in South Africa. The Du Plessis brothers were in Montpellier’s massive front-row, Castres had two locals and a little-known Namibian.

But Castres’ collective dominated Montpellier from start to finish, with Urdapilleta kicking penalties for fun and the Castres team barely missing a tackle in a 29-13 win. The onset of the revival under Vern Cotter at Montpellier was blundered into the Stade de France turf.

It is always the collective that propels Castres in fact. The team has made points all season of winning games ugly, of taking every point on offer and of eschewing the champagne that is demanded of their more illustrious neighbours in Toulouse – whom Castres beat in the semi-final. Those from the town not on the 22 busloads of fans heading up to the capital, nor on the TGV train from Toulouse, nor taking a chance and driving up in their own vehicles, will be rammed into the Stade Pierre-Fabre and watching the game on the big screen. The town is, for all essential purposes, shut on Friday night, unless you are going for a beer in one of the rugby bars (there are many).

Montpellier’s collective identity might not be as strong, but it would be perilous to underestimate how well Saint-Andre has done to bring the different parts of the team together. Friday’s match will not be one tight team and one team of loosely-confederated egos, Montpellier are a tight and cohesive unit and will have no weakness of spirit for Castres to test.

On paper there is not much of a match. Montpellier have three of France’s brightest things in the backs, and one of Italy’s in fly-half Paolo Garbisi. It’s an international front-row of vast experience too, while the talents of Mercer and Camara in the back-row also need little introduction. On the bench there is the siege-gun boot and experience of Handre Pollard, as well as the emerging talent of scrum-half Gela Aprasidze.

Castres have their South American pivot, not just the kicking points machine that is Urdapilleta but also Uruguayan scrum-half Santiago Arata. Other recognisable names? Veteran centre Thomas Combezou will be known to many, as will his partner Vilimoni Botitu. Full-back Julien Dumora has made a name for himself this season. The experienced heads of Loic Jacquet and Levan Chilachava are on the bench.

But names don’t suit Castres, except the name of the town itself. There’s been enough weight behind it to carry the under-resourced club all the way to the final once again. If Montpellier show a shred of overconfidence, it will be enough for them to win it.

READ MORE: Top 14: Jean-Baptiste Elissalde up before the beaks