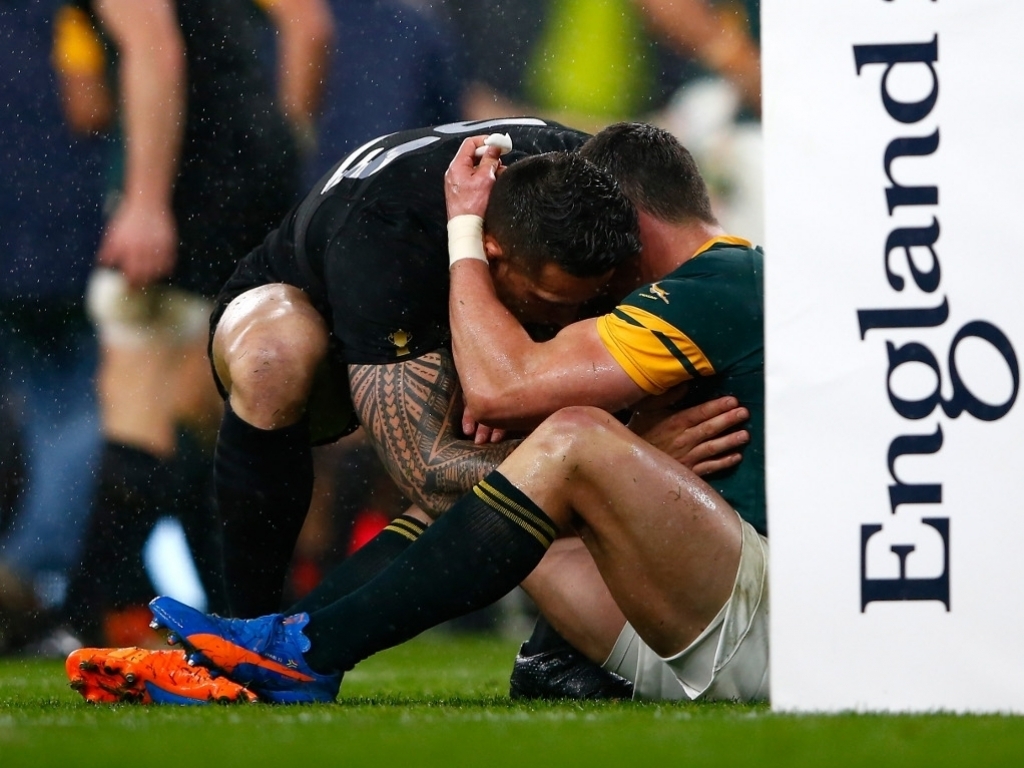 The 2015 Rugby World Cup will surely go down as the most unforgettable in the tournament's history after breaking new ground in England.

While the Webb Ellis Cup was deservedly won by favourites New Zealand for a third time, the competition was not as predictable as one might have expected.

From post-match wedding proposals, funny Nigel Owens' quotes and props kicking conversions to full attendances, massive upsets and even an off-load of a winners' medal – this edition had just about everything!

10. Prop's Conversion Attempt
In his final Test match, Namibia prop Johnny Redelinghuys attempted a conversion with the last kick of his team's 64-19 Pool C loss to Argentina. The 111-kg forward even did his best Jonny Wilkinson style impression before striking the ball. Ultimately though his effort lacked the height and distance required as the ball dropped below the target and came back off the base of the post.

9. Cudmore eavesdrops on the French huddle
Prior to an attacking lineout on Canada's five-metre line, the French pack formed a huddle to decide on a strategy. Canadian captain Jamie Cudmore – who speaks fluent French having payed in the Top14 for a decade – cheekily attempted to eavesdrop on their huddle, but the lock was pulled out and pushed away. Les Bleus went on to win the Pool D encounter 41-18.

8. Gorgodze's reaction to being named MOTM
Georgia captain Mamuka Gorgodze's reaction to being named Man-of-the-Match in his team's valiant 43-10 defeat to New Zealand in Pool C was certainly a memorable one. The subbed forward looked surprised to hear the annoucement, which was greeted with a huge crowd cheer and congratulatory pats on the back from his teammates, as the Lelos' hard-man saved argubly his biggest ever smile for the cameras.

7. Madigan's tears and the Irish Invasion
Throughout the competition emotions ran high both on and off the field as Ian Madigan's face showed following Ireland's hard-fought 24-9 victory over France in Pool D. The fly-half was reduced to tears of joy upon the sheer weight of support from family and friends on such a momentus occasion. The huge and vocal Irish following at the event was one of the tournament's major highlights.

6. Dejected Kriel consoled by SBW
Even in defeat there was mutual respect and shows of sportsmanship displayed from opposing teams after fierce battles of intensity and attrition. This was most apparent in the aftermath of the semi-finals, where New Zealand's Sonny Bill Williams consoled a dejected Jesse Kriel of South Africa plus Australia and Argentina too embraced the spirit of the games following their breathless tussle.

5. Joubert flees the scene
After his questionable performance in the 2011 final, referee Craig Joubert was again the main subject of controversy when he awarded Australia a last-minute penalty, which they successfully kicked to break Scottish hearts in a 35-34 win. But his decision to run off at the final whistle left a bad taste and unfortunately overshadowed what was had been an enthralling quarter-final.

4. Habana equals Lomu's try record
While England 2015 was a tournament of many firsts in the sport's history, Bryan Habana equalled but narrowly missed out on becoming the competition's sole record try scorer. The Springboks' speedster celebrated his third try against USA with a fitting tribute after tying with Jonah Lomu's haul of 15 tournament tries. Habana though was unable to cross the whitewash again in South Africa's next three games.

3. Savea's 'Lomu-esque' try against France
Having been touted as the 'next Jonah Lomu', Julian Savea delivered by finishing top try scorer with eight and even replicated a score similar to those made famous by the All Blacks' great in 1995 and 1999. The giant winger blasted his way past three French defenders to barge over in the corner during the Kiwis' 62-13 quarter-final rout for one of the tries of the tounament.

2. SBW gives his winners' medal to a kid
England 2015 was a tournament where off-loads and acts of bravery were rewarded, and that was certainly the case for one young fan. Charlie Lines, 14, ran onto the pitch as the New Zealand players were on a lap of honour following their final win. Security tackled him to the ground but Sonny Bill Williams intervened, celebrated with the youngster before giving him his World Cup winners' medal.

1. Japan's shock win over South Africa
Unfancied Japan's stunning performance to upset the Springboks through Karne Hesketh's heroic 84th-minute try shocked the world and in many ways set the tone for the exciting tournament that ensued. The Brave Blossoms captured the hearts and minds of many with their fearless playing style, and the 2019 hosts have left us with much to anticipate as we look forward to the next edition.