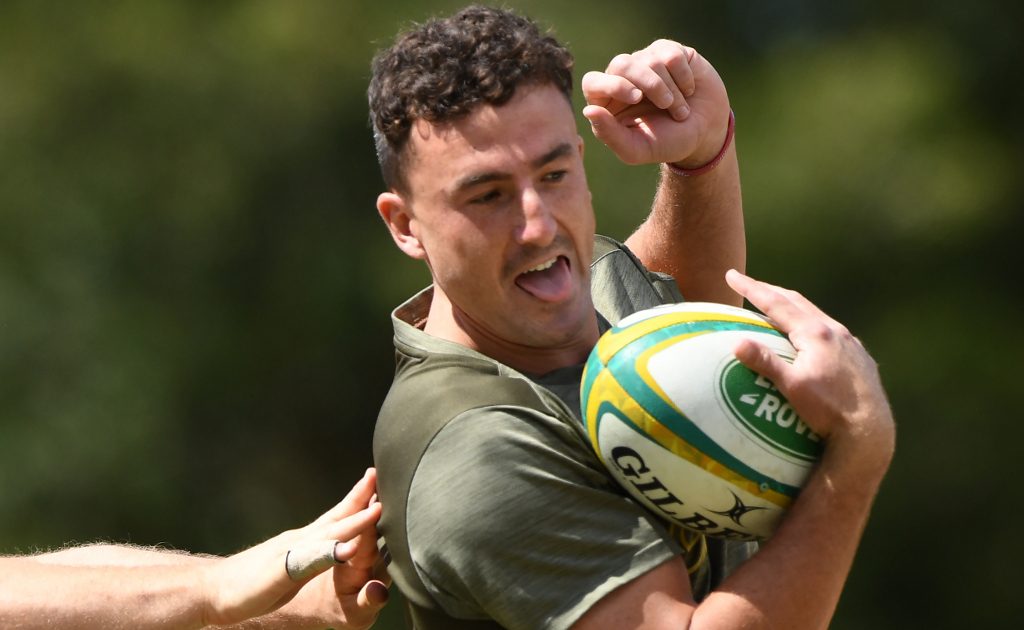 Wallabies and Brumbies full-back Tom Banks is eager to take the next steps in his recovery from an arm injury, inspired by added competition within the squad.

Banks missed the remainder of  Australia’s 2021 season after being forced off in the early minutes of their 30-17 victory over South Africa in September.

As he begins his return to contact, the 27-year-old was raring to go, expecting to be at full fitness after the new year.

‘Really excited to get training, we have a new group here with a lot of young boys but everyone’s been really training hard with the program put together so it’s exciting,” Banks told reporters.

“I’ve had surgery on (the arm) and all reports are going really well. I’m in contact progression now so by the start of next year, it’ll be all good to go.

“I’ve done a fair bit of fitness work now so it’s good to be touching the ball again and seeing how the boys are going.”

During his stint on the sidelines, the Wallabies trialled three different options at the back in the final six games – Reece Hodge, Andrew Kellaway and Kurtley Beale.

With Jordan Petaia lined up for a move to 15 for the Reds, the competition surrounding the position heading forward will be one of the main talking points heading into 2022.

However, it’s the added competition at club level Banks noticed instantly as the Brumbies look to improve on their 2021 performances.

This has seen them reload their backline options despite a plethora of Internationals at their disposal, including former Wallabies Jesse Mogg, Chris Feauai-Sautia and Sevens standout Cam Clark.

With the likes of Len Ikitau establishing themselves in the national set-up, Banks is confident the competitive training environment will help them match it with the best in Super Rugby Pacific.

“They’ll take a lot out the Spring Tour,” he believes. “For boys like Lenny (Ikitau) who stepped up and a really good end to the year, I think the confidence he’ll bring (will be massive).

“You’ve got guys like Al (Alaalatoa) who will add a lot to the group but in saying that, the new boys have really stepped up and have laid a really good platform so it’s going to great when they can all come back.

“I think the best thing is everyone is putting their hands up wanting to be selected, it’s a really competitive training environment.”

The Brumbies confirmed last week club legend Stephen Larkham will return as head coach from 2023, something which excited Banks whilst reiterating their focus remains on next year under Dan McKellar.

“He’s a world-class coach but in saying that, there’s still a long way to go so we’re really focused on next year,” he said.

“Dan and the coaching staff have put a really good program together but it’s exciting news and we love having Steve back.”