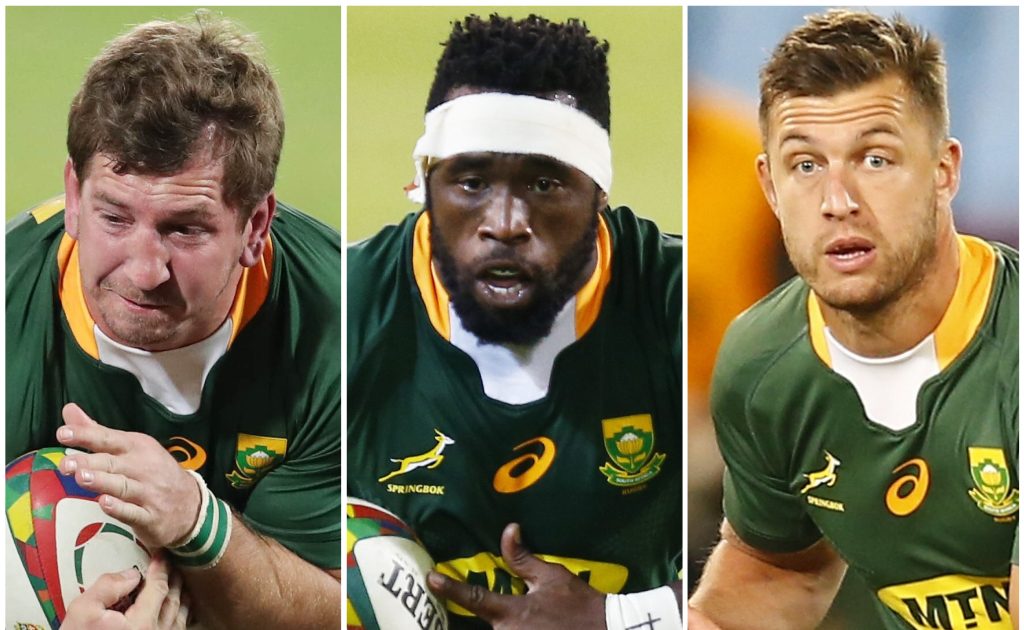 Ahead of the first encounter of their three-Test series against the British and Irish Lions at Cape Town Stadium on Saturday, we take a look at some concerns for the Springboks.

Although the Springboks struck a psychological blow when the South Africa ‘A’ team – who were actually the Boks in all but name – beat the Lions at the same venue last week, the tourists will be quietly confident of drawing first blood in the Test series this weekend.

The reason for that is that several players in the world champions’ matchday squad will be undercooked as they have had little or no action in recent weeks.

Apart from that South Africa ‘A’ fixture, the Boks’ only game since their 2019 Rugby World Cup triumph was a warm-up Test against Georgia at Loftus Versfeld in Pretoria which they won 40-9. After that encounter, the Covid-19 pandemic interfered with the Boks’ preparations as numerous players were struck down by the virus which also wreaked havoc in Georgia’s camp and eventually that match was cancelled.

Amongst those Boks who spent much of the past two weeks in isolation and recovering from Covid were captain Siya Kolisi, Handre Pollard, Bongi Mbonambi and Makazole Mapimpi, who all played leading roles during their triumphant World Cup campaign.

Although all of them will be under pressure to perform, Kolisi and Pollard in particular will have to hit the ground running as they are vital cogs in the Springbok machine. As the team’s leader, Kolisi’s decision-making will have to be excellent throughout while Pollard’s playmaking skills, goal-kicking and game management will also be in the spotlight as those attributes will have to give the side momentum and keep the scoreboard ticking.

With Covid numbers rising in Gauteng, tournament organisers have decided not to play the second and third Tests at FNB Stadium in Johannesburg as originally planned and both those matches will now also be played in Cape Town.

South Africa’s Highveld in Gauteng is an area which is more than 1500 metres above sea level and has been viewed as an ally for the Boks as most touring teams have struggled to adapt to the conditions. Playing at altitude where the air is thinner has an impact on the lungs – especially during the latter stages of matches – and the ball also travels much further when kicking it. South Africa’s tactical kicking game is a big part of their game-plan and playing at altitude would have suited them perfectly.

So, with all three Tests being played at sea level, many pundits believe the Lions’ chances of clinching a first series win over the Boks since 1997 have greatly improved. That Lions team of 24 years ago played the first two Tests in Cape Town and Durban and clinched a series triumph by winning both those matches before losing to South Africa in Johannesburg.

However, the Boks claimed victories in the first two Tests in Durban and Pretoria in 2009, before Ian McGeechan’s Lions finished the series on a high by beating their hosts in Johannesburg. That second Test at Loftus Versfeld was an epic encounter and although the Lions were the dominant side for most of it – as they were holding a 19-10 lead on the hour-mark – the altitude factor played its part in the final quarter when the Boks came back strongly to steal a 28-25 victory.

Cape Town’s cold and wet weather makes conditions very different to the Highveld and the city has had plenty of rain in recent days. That should suit the tourists, who are used to playing in similar conditions in the United Kingdom and Ireland but it will be interesting to see how it affects the Boks.

Losing the services of Vermeulen, who sustained an ankle injury during the Bulls’ PRO14 Rainbow Cup SA clash with the Stormers last month, will be a big blow for South Africa.

The veteran number eight has played a leading role for the Boks since Rassie Erasmus’ coaching reign started and his experience in such a crucial series will be greatly missed by his team-mates and rookie head coach Jacques Nienaber.

As one of the side’s main ball carriers and also being an excellent defender, there is little doubt that Vermeulen’s skills as a player will be greatly missed. However, as one of the most experienced Springboks, the 35-year-old’s leadership skills and calmness when the chips are down in Test rugby’s pressure cooker environment is something which the home side will be yearning, especially when matches are tight.

Kwagga Smith has been entrusted with the task of wearing the number eight jersey this weekend and there will be a huge responsibility on his shoulders. Primarily an openside flanker, Smith brings different qualities to the party and don’t expect him to try and copy Vermeulen’s style of play.

Fleet-footed and superb on the ground, Smith is not as strong a ball carrier as Vermeulen but his linking play is excellent and if the Boks dominate, he should pop up in the wide channels with devastating effect. However, if they are on the back foot, it could be a long day at the office for the 28-year-old, who will be playing in only his eighth Test.