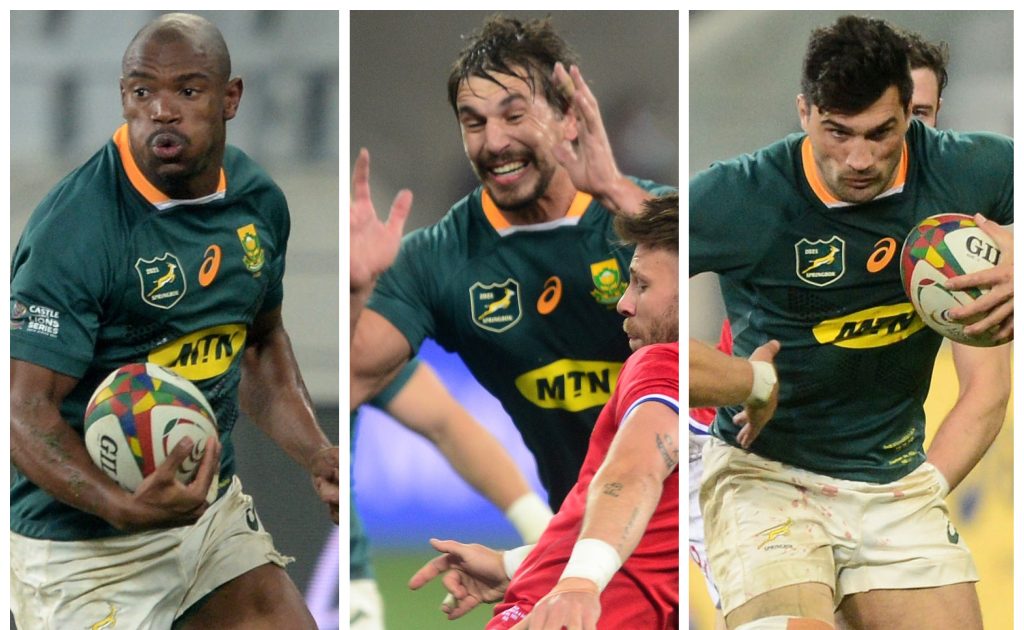 Ahead of the second encounter of the three-Test series between South Africa and the British and Irish Lions in Cape Town, we identify some facets of play which the Springboks must improve to beat the tourists.

In the first Test, the Boks’ attacking game-plan worked superbly during the opening 40 minutes with Handre Pollard doing well as the world champions’ chief playmaker and controlling proceedings nicely with excellent game management.

Although they held the upper hand during that period, the Boks delivered nothing of substance on attack and there were few enterprising attacking moves from their backs. Four Pollard penalties was their only reward during that spell, as they held a 12-3 lead at the interval. Although Faf de Klerk scored a try in the second half, they hardly tested the Lions defence with any well-worked and penetrative attacking moves.

Ahead of the series opener, former Springboks head coach Peter de Villiers received plenty of criticism for saying the world champions’ game-plan was a boring one which doesn’t allow them to unleash the strengths of excitement machine Cheslin Kolbe, who is one of the sport’s best attacking players.

When on song, the diminutive flyer can run the world’s best defences ragged but based on his performance in that first Test, De Villiers was proven right in his assertion as Kolbe saw very little of the ball on attack. He only gained 16 metres from three attacking runs, while fellow wing Makazole Mapimpi made a meagre six metres from two carries.

However, the jury is still out on the Boks’ attacking play as they showed during their triumphant World Cup campaign that they have the ability to bring out the best in their outside backs and hopefully that does happen this Saturday. But for that to occur their forwards have to set a good platform which brings us to our next point.

This is a facet of play which has been crucial to the Springboks’ dominance over opposing teams for years now and although they made a good start in this department during the first Test, they faded badly as that encounter progressed.

The Springboks’ power game, which paved the way to victory in several games during the 2019 World Cup, disappeared last Saturday and it was a case of the bullies becoming the bullied as the Lions were the dominant force.

Although Springbok enforcer Eben Etzebeth took the fight to his opponents, he appeared to be in a lone battle at times and although Franco Mostert, Pieter-Steph du Toit, Siya Kolisi and Damian de Allende tried gallantly to make their mark, they were kept in check by their opponents and made little headway.

That meant the home side were on the back foot for long periods of that second half which allowed the Lions to win most of the collisions. Because there was little go-forward coming from the Boks, they committed a plethora of errors and their nine-point half-time lead was erased midway through that second half never to be regained again.

In the end, their frustrations got the better of them – largely because they were not dominant in the physicality stakes – and they eventually conceded 14 penalties to the Lions’ eight, something which they can ill-afford this weekend.

Much has been said and written about the Covid outbreak in the Bok camp, which was not ideal preparation for that first Test, and several of their players looked jaded during the latter stages of that Test.

A huge part of their previous successes under head honcho Rassie Erasmus was down to the physical impact made by the fresh legs of their much-vaunted ‘bomb squad’ off the replacements bench, but that wasn’t the case last week and Bok supporters will be hoping for an improved performance from their finishers.

Along with that physical dominance, a strong overall set-piece has traditionally been one of the strengths of Springbok rugby but the world champions did not match their usual high standards in the tight phases last week.

The Boks started the first Test with Trevor Nyakane and Test rookie Ox Nche as the two props alongside hooker Bongi Mbonambi and, although there were concerns amongst Bok supporters about that front-row, they stood up well in the scrums and it came as a surprise when all three players were replaced at half-time.

A large contributing factor to South Africa’s World Cup success was the way their forward replacements were used but the introduction of Steven Kitshoff, Malcolm Marx and Frans Malherbe backfired as they struggled in the scrums, where they were on the back foot on several occasions and also conceded some penalties.

The Boks also had an edge in the lineouts during the first half with Etzebeth and Mostert doing well to put pressure on their opponents’ throw-ins which meant the visitors received scrappy ball on a few occasions. However, the Lions controlled that aerial battle in the second half with captain Alun Wyn Jones, Maro Itoje and Courtney Lawes making their presence felt in a big way during that period.

It was a similar story with the Boks’ mauling which has been one of their attacking weapons for some time now but they made little headway in that facet throughout the game as the Lions halted their momentum with regularity – something which Erasmus pointed out as being illegal in his recent video rant.