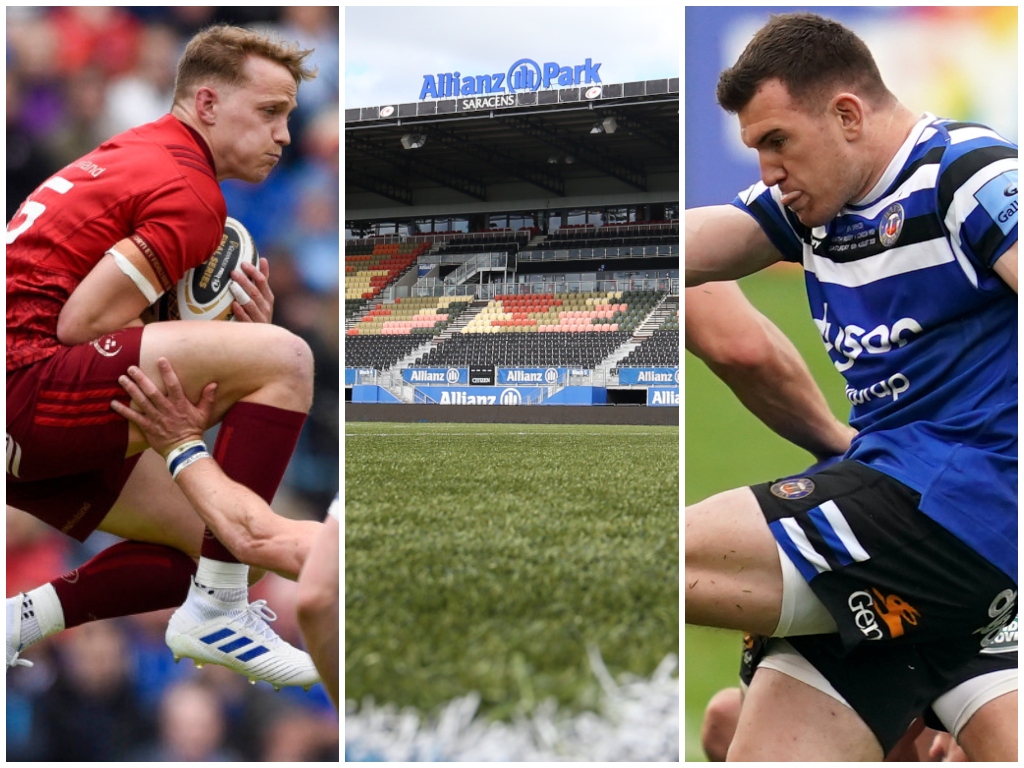 Premiership game to watch – Well, there’s four of them

Four teams are battling to make three play-off spots in the Premiership on Sunday as Wasps, Bath, Sale Sharks and Bristol Bears look to join Exeter Chiefs in the knockout stages. Just two points separate the quartet heading into this final round and with all the games starting at the same time, there’s drama in store.

Wasps host a second-string Exeter side so one would expect them to prevail while Bath travel to face a smarting and emotional Saracens who will be keen to bow out of the top flight with a win. Sale meet a dangerous Worcester team but should fancy their chances of making the cut – if the game goes ahead of course – and finally Bristol Bears are at a London Irish side buoyed by a recent triumph at Exeter. Get the popcorn out, Sunday should be a tasty afternoon’s viewing.

There will be plenty of international talent on show at Parc y Scarlets on Saturday when Scarlets and Munster clash in their opening game of the PRO14 campaign. Throw in the return to competitive action of Wales centre Jonathan Davies for his first match since the World Cup last year and there is added excitement over this meeting. Davies joins Steffan Hughes in midfield and their battle with Munster duo Damian de Allende and Chris Farrell certainly whets the appetite.

Due to the quick turnaround in seasons as competitions play catch-up, it is somewhat refreshing to see teams rolling out their big guns from the outset and these line-ups do make for a fascinating duel in Llanelli. Both sides are going all-out to start the new season on a positive note and we can’t wait for this fixture.

After spending nine years at Saracens, the England scrum-half will not be lacking motivation when he takes on his former team-mates at his old stomping ground, Allianz Park, in what is a must-win fixture for Bath in their quest to secure a knockout place.

Spencer’s departure earlier this year came as a result of the defending champions’ involvement in the salary-cap scandal, but a move to Bath has proved to be the right one as he’s been one of their star players and at the centre of their charge to the play-offs.

The 29-year-old has been in superb try-scoring form for the men from the Rec and impressed with excellent service to his outside backs. He also has the tools to unlock the tightest defences, with his brilliant playmaking ability and threat around the fringes of the rucks and mauls causing opposing sides problems.

Spencer has proved an excellent link between Bath’s backs and forwards too and will be determined to continue with his outstanding form, although he can expect stiff opposition from his former club, who will keep a close eye on him as they know him well.

This promises to be a hard-fought duel between two of the Premiership’s leading hookers, who will both be refreshed and determined to put in strong performances after starting on the replacements bench during their respective teams’ matches in midweek.

Creevy might be 35 but he’s proven in the past that he is still one of the best hookers in the game and has impressed since joining the Exiles earlier this year. An explosive ball carrier, Argentina’s most capped Test player will be hoping to give his team much needed momentum on attack with some strong runs while he will also be keen to make an impact in the execution of his core duties.

However, he faces a tough assignment against Thacker, whose career has blossomed at Bristol since making the switch from Leicester Tigers in 2018. Thacker’s free-running style of play makes him a threat to any opposition and he will be looking to test his skills against a player of Creevy’s calibre and experience.

To my @Saracens family … pic.twitter.com/0lDXEIb5J1

Subplot to watch – Goodbye to Saracens

We’ve mentioned already how emotional the occasion should be at Allianz Park as one of England and Europe’s most successful sides bring down the curtain on a fruitful era at the top. While they have their critics and some have enjoyed their demise, it is hard to ignore the team and individual accolades this side has achieved over the years. Star players and up-and-coming talent have provided internationals aplenty and no doubt there will be plenty of lumps in throats on Sunday.

Singling out just two players from their squad, the day will be extra special for Richard Wigglesworth as he reaches 250 appearances while Brad Barritt, who is unlikely to feature due to injury, will be a teary-eyed observer as he says goodbye. It’s just a huge shame there’s no fans in attendance for their last dance.

The new PRO14 campaign kicked off on Friday with three games seeing Zebre, Leinster and Ulster face Cardiff Blues, Dragons and Benetton respectively. Outside of our featured game – Scarlets v Munster – there is Glasgow going to Connacht and Edinburgh play host to Ospreys in some tasty matches on Saturday.

Away from the focus of the play-off race in the Premiership, there is Gloucester up against an out-of-form Northampton side and struggling Leicester Tigers hosting Harlequins. That’s not to say there’s nothing to play for as the Cherry and Whites and Saints who look to stay in the top eight with Worcester on their heels.