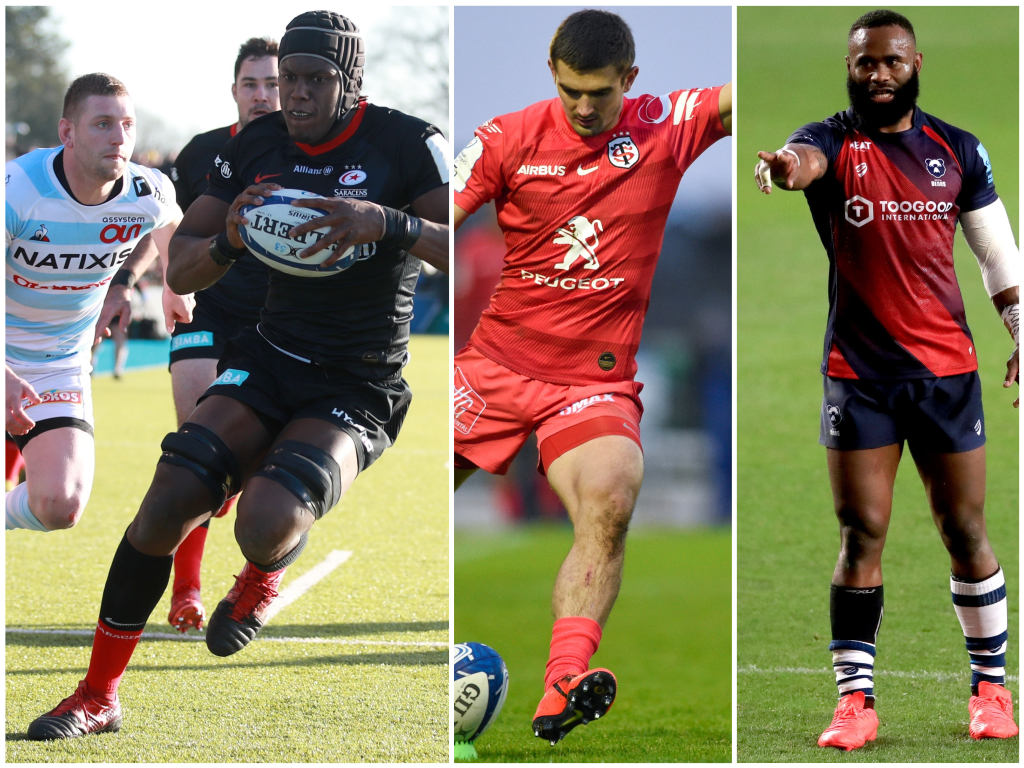 They have stunned Europe once but can Saracens do it again, this time in the French capital? The Englishmen were utterly outstanding in Dublin, overpowering and out-thinking Leinster to claim a 25-17 triumph at the Aviva Stadium.

This weekend’s game may well be even tougher for the visitors, however. That is not necessarily because Racing are a better side but the question remains as to whether Sarries can produce the same emotional energy.

Their efforts were akin to a final but, such is the way this competition has been organised due to the coronavirus pandemic, they now have to back it up. Once again, it is away from home and on a pitch where they struggled in the opening round of the 2019/20 Champions Cup.

Admittedly, it was a second-string outfit but Mark McCall’s men had no answer to the pace and athleticism of the French outfit, succumbing 30-10 at the La Defense Arena. They did, somehow, emerge victorious in the reverse fixture. That was a despite a red card to Will Skelton, whose nasty shoulder charge resulted in his now former team playing over 40 minutes with 14 men.

On that day, and indeed last Saturday, Maro Itoje was in inspirational form and the England lock will need to repeat that if Saracens are to claim their place in the showpiece event.

Although the situation is supposedly the same for every semi-finalist, Racing were never really tested by Clermont Auvergne and should go into this encounter mentally fresher. The 36-27 scoreline may well look close but the Parisians could – and ultimately did – ease off in the latter exchanges as thoughts moved on towards the last four.

The Top 14 side have talent aplenty, especially behind the scrum, but Saracens will feel that they can target the pack. On paper, they don’t quite have the same quality up front as Leinster, but it all comes down to whether Sarries have recovered from their exertions in Dublin.

Racing are therefore clear favourites but, as we’ve found out, if there is one team that can upset the apple cart, it is Saracens.

The young upstarts against the European giants, this is set to be an intriguing battle at Sandy Park. Since their promotion into England’s top-tier in 2010, Exeter’s rise has been remarkable and they claimed the Premiership title in 2017 but, should the West Countrymen add a European crown to their cabinet, it would be extra special.

After previously struggling in the Champions Cup, despite their domestic consistency, the Chiefs’ credentials have been questioned, but this season – and a win here – should put those concerns to bed.

Rob Baxter’s men have enjoyed an outstanding European campaign and strolled to victory against Northampton Saints in the quarter-finals. It was not Exeter at their best but they were still too good for their fellow English outfit.

It left their director of rugby stating that they ‘needed’ a test against a side as good as Toulouse. You can see the logic, but there is perhaps a case of ‘be careful what you wish for.’ Les Rouge et Noir absolutely dismantled Ulster in the last eight and will look to challenge the Devonians with their unique style.

Many teams, including Exeter, look to play expansively, but Ugo Mola’s charges hark back to a bygone age when French teams played with such reckless abandon. Significant improvement in all aspects of the game, but especially defence, has seen that structureless game plan dissipate, but Toulouse have almost brought it back and modernised it.

👏 Make a break, prevent a wardrobe malfunction, set up a try.

🤷‍♂️ How casual is this from Toulouse centre Sofiane Guitoune? pic.twitter.com/K0FHr2wzvQ

At times they can overplay, but there is such intelligence to the way they manipulate defences that it seldom fails. Of course, there is power – and the pack is massive – but it is the dexterity of both forwards and backs which enables them to cut teams apart.

Antoine Dupont and Romain Ntamack, despite their youth, are very bright players and will dictate the way the Frenchmen operate on Saturday. They are likely to be more conservative, given that it is a semi-final away from home, but Mola’s side must continue to be brave with ball in hand otherwise the Chiefs will pounce.

Despite seeing team-mate Michael Rhodes picking up the man of the match award, many thought it should have gone to the England second-row, and for good reason. His performance against Leinster was simply world-class as he led the way in their set-piece and defensive efforts.

Questions were asked of Sarries’ strength on the bench – the squad being decimated following their relegation for salary cap breaches – but in Itoje they genuinely have an 80-minute man. He is an incredible athlete that reads the game so well and the 25-year-old was once again a thorn in the side of Irish rugby.

There is almost a grudging respect which emanates from Ireland when the lock takes to the field as Itoje’s nuisance value and antics, which border on gamesmanship, is offset by his technical and physical brilliance.

It is rare that the Englishman’s level drops and he will need to summon the same energy against Racing 92 this weekend. It will be a different match, one which may not necessarily suit the second-row’s close-quarter excellence, but he will no doubt be up for the challenge.

The Parisians will look to increase the pace of the game on their artificial surface and take away the influence that the Red Rose player has at the breakdown and lineout, but Itoje is adept at finding ways of disrupting opposition ball.

Although there are several highly anticipated duels set to take place across the two Champions Cup fixtures, the battle between these full-backs is sure to set the pulses racing as both Hogg and Ramos are crucial to their respective sides’ causes.

Hogg has flourished since joining Exeter from Glasgow Warriors in 2019 and has cemented himself in the Premiership outfit’s starting line-up with several outstanding performances. A brilliant strike runner, who usually makes an impact when he joins the Chiefs’ backline, his team-mates will be keen to exploit weaknesses in Toulouse’s defence – especially in the wider channels – where the Scotland international is difficult to stop and he has shown in the past that he is a superb finisher for club and country.

The 28-year-old’s attacking brilliance is not just restricted to his try-scoring prowess as he is also an excellent playmaker, who will be looking to set up try-scoring chances for his team-mates, while he also possesses a monster boot and has the ability to change the course of a match by slotting long-range penalties.

With this being a knockout match, don’t be surprised if goal-kicking plays its part and in Ramos, Toulouse have one of the best sharp-shooters in the tournament. Last week’s form off the kicking tee in Toulouse’s 36-8 quarter-final victory over Ulster was a rare off day but he still finished with an 11-point haul in that game courtesy of four conversions and a penalty.

That contribution means Ramos heads into Saturday’s clash against Exeter as the second highest points-scorer in the Champions Cup with 77 points, just two adrift of Ulster’s John Cooney. Ramos has also slotted the most penalties in the competition so far but his game is not just about goal-kicking. In a star-studded Toulouse backline, he also provides strikepower from the back and is a big attacking weapon alongside the likes of Cheslin Kolbe, Antoine Dupont and Romain Ntamack.

The Fijian flyer has hit the ground running since joining Bristol Bears from the Bordeaux-Begles and all eyes will be on him when these teams go head-to-head in their Challenge Cup semi-final at Ashton Gate on Friday.

Radradra made a name for himself as a rugby league player in the NRL before switching to the 15-man code in 2017 when he joined Toulon. After one season, he joined Top 14 rivals Bordeaux where hit the headlines with several outstanding attacking performances during a two-year spell. He continued to impress for Fiji at the 2019 Rugby World Cup in Japan – where he was one of the best players on display – before it was announced late last year that he was leaving UBB to join Bristol.

Since his move to the Bears, Radradra has proved difficult to stop and he is yet to put a foot wrong on attack. Bristol’s Challenge Cup quarter-final hammering of the Dragons was arguably his best performance since joining the Premiership outfit. He finished that match with 96 metres gained from 10 runs which included five clean breaks, three defenders beaten, two offloads, which resulted in tries for team-mate Ben Earl, and he also crossed the whitewash himself.

He will be determined to continue with a similar performance on Friday and it will be interesting to see if his former team-mates can keep him in check.

Semi Radradra is something else… 🔥

All roads lead to Ashton Gate on Friday night as the weekend’s action gets underway when Bristol host Bordeaux-Begles in the opening Challenge Cup semi-final.

After securing a one-sided 56-17 victory against the Dragons at the same venue in their quarter-final last weekend, Bristol will fancy their chances of advancing to the final. With international stars like Radradra, Kyle Sinckler and captain Steven Luatua in their ranks, as well as home ground advantage, Bristol will be full of confidence as they head into this match but they can expect a tough challenge from Bordeaux-Begles, who impressed by claiming a hard-fought 23-14 triumph against Edinburgh in their quarter-final last weekend.

The other semi-final sees Toulon facing Leicester Tigers at Stade Félix Mayol on Saturday. The home side were made to work very hard to reach the last four with a second half try from Sergio Parisse eventually securing them a narrow 11-6 home win over the Scarlets. By contrast, Leicester had an easy passage to this semi-final after their quarter-final with Castres was cancelled when three of the French side’s players tested positive for coronavirus.