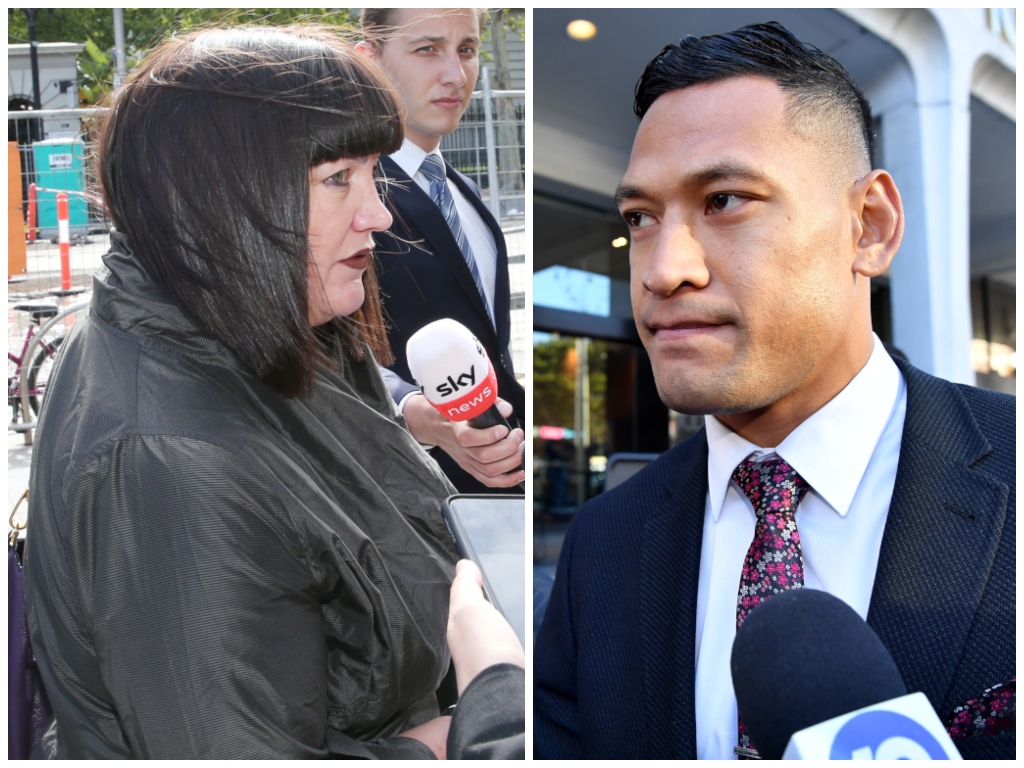 Us rugby lot are fickle folk and we like to believe our game is one based upon the ethics of sportsmanship and fair play that characterise most of the sport. However, when things go wrong, so controversy rears its ugly head.

We look back at the 10 scandals that rocked the decade.

Nothing has dominated the rugby social media rattle quite like Folau’s increasing intransigence over his views on same sex relationships.

That intransigence was matched only by the entrenched and blinkered position of Raelene Castle and her charges at Rugby Australia, resulting in a stand-off of epic proportions, legal action and the loss of an incredible rugby talent to the game.

What Rugby Australia failed to understand is that Folau deeply holds these beliefs, based upon his Pacific Island upbringing where attitudes are different.

The saddest thing about the saga is the complete lack of empathy shown by Castle and her cronies; beliefs such as Folau’s are based upon relatively simple social norms in his homelands.

Folau’s personal hypocrisy was there for all to see too, as here’s the man that took the pink pound to become an ambassador for the LGBTQ Bingham Cup event in Sydney in 2014. For this chasing of the coin against his so called passionate religious beliefs was contradictory beyond farcical.

But, here’s the deal – the only way his and others’ perceptions could possibly be changed was by engagement and explanation, not confrontation and conflict. Rugby Australia took the latter route, a disastrous choice.

A golden opportunity was wasted to drive forward the needed change via dialogue in this sorry saga; very few support Folau’s views but those that do are unlikely to have their position changed through being punished when they fundamentally believe their views are the word of their God.

Folau was seriously culpable of discrimination, of that there is no doubt. He was hypocritical, crass and bigoted in his articulated views, but even his biggest critic would accede that these views were created via an environment not of his making.

Rugby Australia however were guilty of absolutely posturing stupidity and that falls squarely at the door of Castle. That is totally unforgivable.

It appeared nothing could get worse for Martin Johnson’s England in Rugby World Cup 2011 when France unceremoniously dumped them out of the tournament in the quarter-final. That was until the team took a post-match trip to Waiheke Island with his England team-mates.

The dry press release that followed explained that “A member of the England rugby team at 6.48pm yesterday jumped overboard from a ferry just before it was about to berth at the ferry terminal in Auckland and he swam to a nearby pier.”

Planet Rugby’s regular contributor Lewis Moody skippered that tour and said “One minute he was standing next to us, the next minute he’d leapt off into the harbour! We thought he was kidding!”

Tuilagi certainly has made a few headlines in his career but this was certainly the biggest splash of all.

Craig Joubert on Twickenham exit: 'It was to avoid any possible unseemly confrontation'. https://t.co/uy3tlFgUX4 pic.twitter.com/MRGWCck7VR

For 68 Test matches, the Durbanite was magnificent – it was a feature of his reffing that every time you watched a match live in a stadium and thought he was wrong, when you got home and watched the re-run you’d find him invariably accurate.

For the scribes amongst us he was an honest, engaging and very decent man, who was open to explaining decisions and always friendly enough to chat about the game without fear he’d be misquoted.

However, he had, in modern parlance, an absolute brain-f*rt when awarding a controversial penalty during the dying minutes of the 2015 Scotland v Australia quarter-final, one that resulted in such opprobrium from the spectators that upon the final whistle, he ran off the pitch away from the disgruntled players in a manner that was reminiscent of an angry Velociraptor chasing Sam Neill around Jurassic Park.

It was a great shame it ended this was for CJ. As he himself said: “In hindsight, would I have reconsidered that decision? Absolutely.”

That sums the guy up – he was always as honest as the day is long.

Stuart Lancaster was a man of great integrity; integrity that took him all his career to build and a quality that he spent four years instilling into his England team.

However, there’s an old adage that says it takes a lifetime to build trust and a moment to lose it, and that’s precisely what Lancaster did when he, with pressure from the RFU and elsewhere, fast tracked rugby league starlet Sam Burgess into a World Cup squad.

To this day nobody is exactly sure of the reasoning behind it. Burgess was at best an incredibly average union centre and his inclusion was unfathomable. He returned to league with whimper rather than a bang, disappointingly showing little interest in a sport that had tried to embrace him.

One point of note is that during this time, England Rugby signed a deal with Canterbury, the kit supplier. Burgess was Canterbury’s highest paid ambassador. It all seems too obvious so we’ll let you do the math on this one.

Most of the events we’ve listed were non-playing incidents. However, standing on the top of the high-profile heap where red cards go, was Williams’ attempted decapitation of Anthony Watson on the British and Irish Lions tour of 2017.

How ever revisionist one wants to be about that series, in simple terms the Lions would have lost had SBW not been sent off. Yes, they were an outstanding side, but so were New Zealand.

The incident was the first of the high-profile reds for head contact tackles (or attempted tackles). In hindsight, it’s safe to say Williams wanted to nail Watson good and proper, but he probably went just a bit further than even the hard Kiwi centre would have wanted. It was pivotal in a series that happens only once in 12 years.

It says everything about Williams the man that he and Watson spent a lot of time together over a beer post-match. He’s a tough man, but this was uncharacteristic of the dual code legend.

It’s tragic that the career of the World Rugby Breakthrough Player of 2018 is now in tatters due to what is commonly known as a doping offence.

Rugby has been relatively free of scandal in this regard, but many believe that Dyantyi’s situation is just the tip of the ‘roiding iceberg in the game.

As with all these things, the saddest part of the scandal is the ongoing quest for the dopers to mask steroid abuse and to create bigger and better doping products, untraceable for the authorities.

Dyantyi must be devastated, but if he wants any consolation it must be that the publicity surrounding his case will dissuade others from going down the same path.

It doesn’t pay to be a dope.

All Blacks Aaron Smith speaks to the media for the first time after being caught in a Christchurch disable toilet with a female pic.twitter.com/KkMagGBDsW

What goes on tour stays on tour, so the old adage goes.

However, the comedy antics of All Black legend Smith certainly hit the Red Tops when he was caught having sex in an Airport toilet ‘for good luck’ with an Auckland lawyer before a trip to play South Africa in Johannesburg.

Social media scrutiny forced Smith to reveal all about his secret tryst and what followed was met with disgrace from some quarters and no less mirth from others. You simply couldn’t make this up and looking back a few years later, the headline seems to be no less than ‘girl meets boy, boy meets girl’.

Afterwards, a tearful Smith admitted he’d made a ‘huge mistake, a huge error in judgement’, with Steve Hansen and his staff suspending the scrum-half for one game.

The rugby world was rocked mid-decade by the antics of Paddy Jackson, Stuart Olding, Blane McIlroy and Rory Harrison, who stood accused of raping a 21-year-old in Belfast.

Unedifying messages of distaste emerged from the quartet’s phones that certainly didn’t aid their popularity, but when all was said and done, they were acquitted.

Nonetheless, it is characteristic of the modern era that the men appeared tried and convicted by social media way before the trial. It was a sad episode, one based upon the word of one against the other and fuelled by media speculation.

Thankfully, it’s all over now and the players are free to play but with blemishes on their reputation, but if there’s one takeout from this sorry episode it’s that the media must allow due legal process to take place without the wild speculation that accompanied this case.

Addiction is a cruel mistress and at Rugby World Cup 2019, one of Wales’ favourite sons succumbed to her fickle whims, as Wales backs coach Rob Howley was found to have betted systematically 364 times during his tenure.

Let’s be blunt about this – it’s illegal, it’s wrong and Howlers made a howler.

But, let’s also consider that if the sport takes the poisoned coin of the bookmakers in sponsorship then we can hardly chastise harshly our own colleagues when they are tempted to delve into an industry that is so prolifically advertised within the sport itself.

On the basis that it’s against the rules, Howley should serve his time. But the game owes it to Rob to support his rehabilitation and most of all, welcome him back without reservation once he returns.

When the bidding for the Rugby WorldCup 2023 took place, it seemed that it was nailed on that one of South Africa or Ireland would get the nod.

Sir Bill Beaumont even offered his personal endorsement to the South African bid, with other legends of the game following suit or favouring Ireland.

After a somewhat opaque voting process, France were named as the surprise winner and many within the game believed it was the Euro rather than the rugby that talked.

It was perhaps best summed up by South African commentator Andy Capostagno, who said: “With a global tournament such as the soccer World Cup or the Rugby World Cup, it is all about the money and the bottom line for 2023 is that France has promised 500 million pounds to World Rugby, that is about R9 billion and I don’t think we can come anything close to that.”

As the game moves into the next decade, all at Planet Rugby hope that we learn from this lesson and rugby commits to offer a transparent and inclusive canvass for all ages, races and orientations to enjoy.