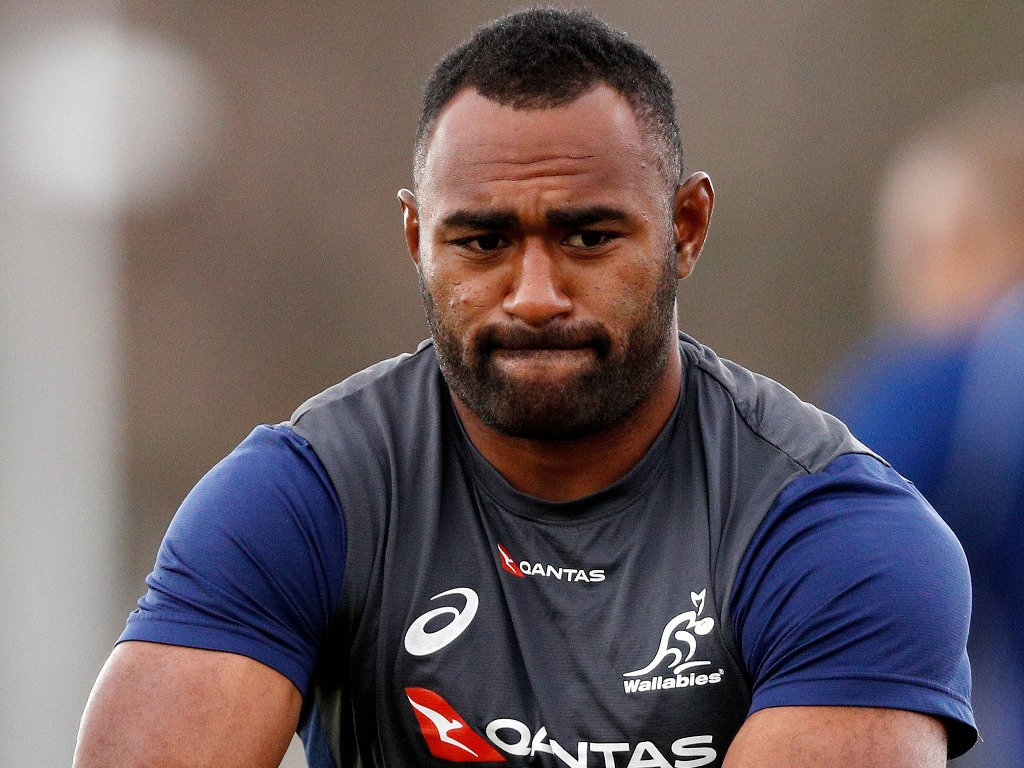 Wallabies head coach Michael Cheika is confident that outside centre Tevita Kuridrani will be fit for Australia’s Rugby World Cup opener against Fiji, but rookie utility back Jordan Petaia’s comeback could still be up to three weeks away.

Kuridrani and Petaia trained separately to the main group on Wednesday, both working their way back from hamstring injuries.

Petaia went back to Australia early from the Wallabies’ pre-tournament camp in Noumea while Kuridrani tweaked his hamstring in the build-up to last weekend’s Samoa Test.

Cheika said Kuridrani would likely be back in the mix for Australia’s September 21 opener against FIji, but Petaia could remain out of action until as late as the Wallabies’ October 5 Test against Uruguay in Oita.

“Tevita, he’s running nearly back at full pace so I’m hopeful he’s going to be right to be available for selection next weekend,” Cheika told Rugby Australia’s official website.

“Our target for Jordan is a couple of weeks later, but he’s on track.

“If not Wales, the one after but we’re hopeful it’ll be for Wales. If not, I’m comfortable with the one after.”

With that pair still not match fit, the Wallabies couldn’t really afford another injury in the backline, and certainly the roles of utilities James O’Connor and Adam Ashley-Cooper could become more critical if there was another injury setback.

Lock Adam Coleman also worked separately for much of the main training session on Wednesday in Odawara, still nursing a hand injury from last weekend’s match against Samoa, but Cheika played down any concerns about the second rower.

Rebels forward Luke Jones was flown to Japan to join the squad at the last minute with Coleman being wrapped in cotton wool, arriving on Tuesday morning.

The @qantaswallabies have had their first run at their Japanese home ground'. #RWC2019
READ: https://t.co/WSJy2Qpx0x pic.twitter.com/SKLAsJbhwJ

Jones returned to Melbourne on Sunday, set to link up with Melbourne’s National Rugby Championship (NRC) side, the Rising, but was called to travel to Sydney, and then on to Japan, on Monday night after a decision was made on Coleman.

The utility forward isn’t the only addition to the squad this week – Jack Maddocks and Tom Banks are also with the team ahead of the tournament’s official start date.

Maddocks, Banks and Jones will all return to Australia to play NRC, but will be the first called upon should a player be forced out of the lineup.

In 2015, the Wallabies had hooker James Hanson and lock Sam Carter training in France to be near enough to join the squad in case of injury but, with Japan just an eight-hour flight from Australia and injury replacements unable to join the team until 48 hours after a player is ruled out, there is no need for that this time around.

“Jack and Tom Banks are here and Luke Jones, so we can keep them for this week until the official tournament starts next week,” said Cheika.

“They’re just providing some extra training cover and, of course, they would be the next guys in if we had any injuries.”

The Wallabies trained in front of close to 1,000 people in an open session in Odawara on Wednesday morning, and were given an official welcome by the Odawara mayor, Kenichi Kato.

Children from the local daycare presented each player with a medal, made out of traditional Odawara materials, and a handmade card.

Cheika said the town felt like their own “home ground”

This is the second time the Wallabies have trained in Odawara, having spent time in the area ahead of the third 2018 Bledisloe Cup Test.

“This is sort of our home ground here and we want to make sure the people here enjoy having the Wallabies in town and we thought for our first training session we’d bring them down and let them have a look at training.

“I hope they enjoyed it.”