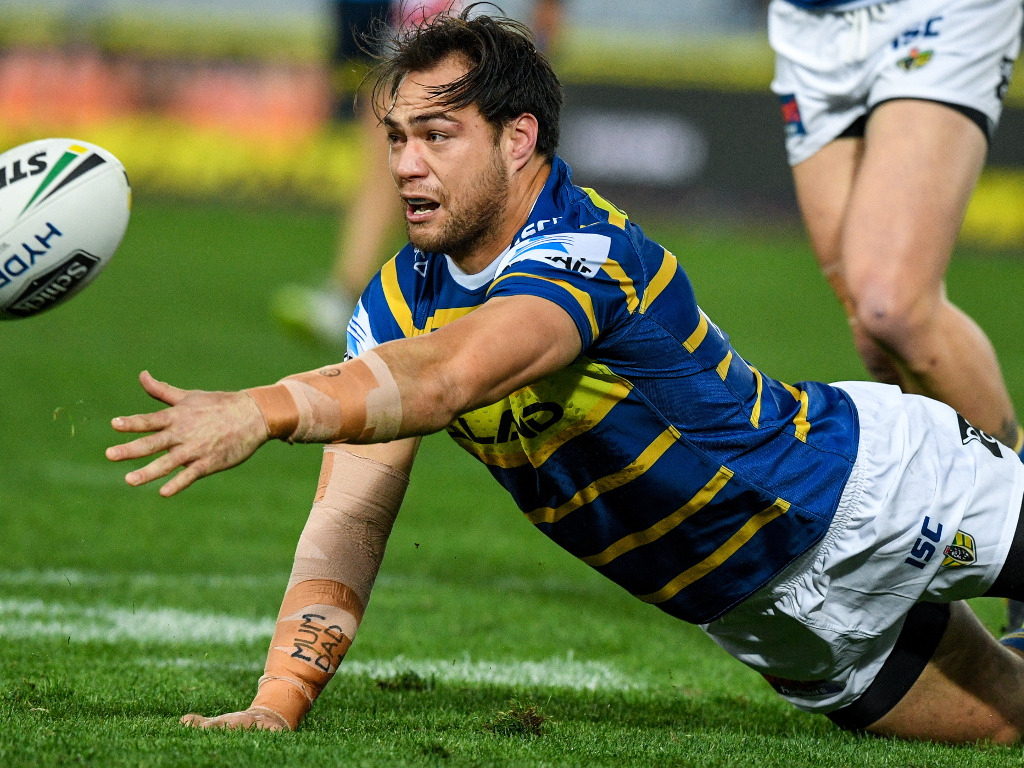 Former NRL star Tepai Moeroa said the chance to learn from Karmichael Hunt at the Waratahs was a major factor in him returning to rugby union.

And the ex-Parramatta Eel says he is in the process of shedding six kilograms from his frame so the abrasive firm of Hunt and Moeroa can be a possible midfield combination for the Waratahs during the Super Rugby season.

“I played both 12 and 13 at school so it’s not a big deal in my mind,” Moeroa told Rugby Australia’s official website.

Moeroa announced in July he would be switching from rugby league to the 15-man game, six years after the Australian schoolboys rugby star elected to pursue a future in the NRL.

Having made his debut for the Eels at the age of 18, it’s easy to forget just how young Moeroa is – he’s still only 24 – and he is counting on the flexibility of youth to help him quickly pick up rugby again.

“I played a lot of rugby growing up when I was at school and I always wanted to come back,” he said.

“It was one of those decisions if I was to come back, now would be the time, 24. If I’d left it another couple of years, I’d be 26 and you’d be thinking it’d be too late to make the transition.

“Now at least I have a couple of years to hopefully cement my spot. I hope it doesn’t take that long, hopefully it’ll only take one pre-season. Now would be the time to come back and give it a red hot crack.”

Not that long ago, Moeroa was one of the most sought-after young footballers in Australia in both codes.

Having attended Newington College in Sydney, Moeroa played nine times in the centres for the Australian schoolboys in 2012 and 2013 (only Quade Cooper and Kurtley Beale have played more) but he chose to sign with Penrith, and then Parramatta, in rugby league.

The Waratahs never stopped chasing Moeroa, however, and almost switching back to rugby in 2017, the Sydneysider decided it was time earlier this year, having played 112 NRL games, represented his birth country Cook Islands, and played for the World XIII and the Prime Ministers XIII.

Though Moeroa played back row in league, he was recruited as a centre and the fact NSW already had a strong number 12 in Hunt didn’t worry him. In fact, it was a carrot.

“That was one of the big reasons I was so excited to come back to rugby,” said Moeroa.

“He has a wealth of experience and just to be able to learn from him, and learn the game, technicalities, positioning, the little things in the game.

“He has been playing it for a while, after playing rugby league. He knows the game, he knows both games and it’s good to be able to get a chance to learn from him.”

New @NSWWaratahs centre Tepai Moeroa is aiming high on his return to rugby after six seasons in the @NRL. #SuperRugby

Two in twelve won’t go but Moeroa said he’s not fazed about the prospect of playing outside centre if required; despite it being a spot that requires athleticism and speed, in both attack and defence.

“I am actually trimming down, so yeah, getting there,” he said.

“Less weight and hopefully I can get around the field a little quicker. It’s too different (between league and union). Defending in the back row (in league) is similar to defending in the centres (in rugby) so it’s not too bad.

“We talked about playing in the centres, no.12 or no.13. I have been training out there. But you never know what happens … I might get pushed into flanker one game and we’ll see what happens.”

Though big enough to play flanker, Moeroa was quick to follow up his quip with the reality that he’s probably going nowhere near the forwards in rugby.

“You don’t understand how technical it actually is to play in the forwards in union; there is a lot more to the game that I would have to pick up and learn,” he said.

“But I am doing well in the backs at the moment, I think I will stick to that.”

Moeroa, who finished up with Parramatta in the NRL elimination finals but played his last game of league with the Cook Islands in the World Nines in October, said the 15-man game was “coming back” after a few weeks of the NSW pre-season.

“Just having to get used to being out wide and having to re-load and organise shape – you are at second five, so you have some control,” he explained.

“That’s different to league, so I am just used to getting the ball and running up.”

A handful of Moeroa’s former Aussie schools team-mates have gone on to play for Australia – including Jack Dempsey, Reece Hodge, Ned Hanigan, Tom Robertson and Henry Hutchison – and the 24-year-old said he would love to go on and play for the Wallabies.

“Down the track, yeah. That’s the ultimate goal,” added Moeroa.

“You want to represent your country and I think ultimately that’s where I would like to be. But for now, I am just flat out trying to make Tahs and that’s where I am focusing right now.”