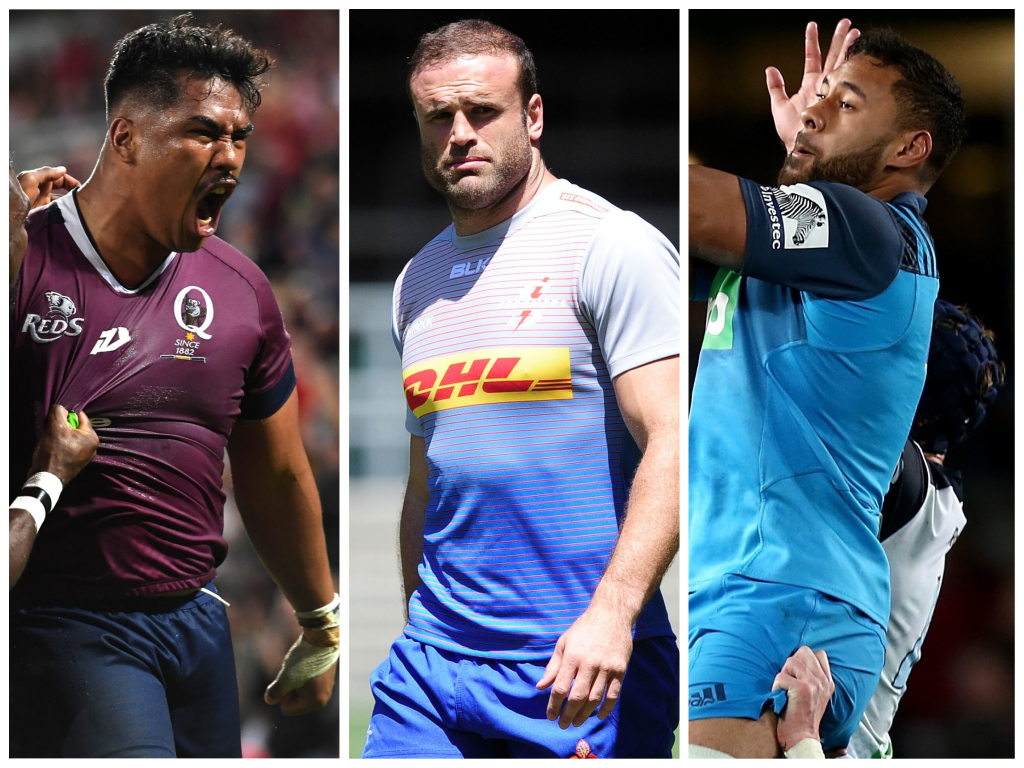 With the dust having settled on Round Four of Super Rugby, we have gone through the action to pick out the best players from the weekend.

The Brumbies lead the way with five players in our side following an excellent away win against the Chiefs, while the Reds are next best with four representatives after their one-sided triumph over the Sunwolves.

Team of the Week: Super Rugby, Round Four

15 Tom Banks (Brumbies): This was a difficult choice as Jock Campbell, Michael Collins and Aphelele Fassi had good games for the Reds, Highlanders and Sharks respectively but Banks makes our team after excelling in a memorable win for the Brumbies against the Chiefs in Hamilton. The Wallaby tested the hosts throughout and eventually ran for 102 metres, beating four defenders and also crossed for a try.

14 Solomone Kata (Brumbies): Another one of the Brumbies’ heroes, the 25-year-old beats out Springbok flyer Cornal Hendricks, who had a good game in the Bulls’ narrow defeat to the Blues. Kata looked dangerous on attack, gaining 48 metres from six runs which included two clean breaks, five defenders beaten an offload and a deserved try.

13 Hunter Paisami (Reds): When it was confirmed Samu Kerevi was leaving the Reds at the end of the 2019 campaign, there was some concern about the gap being left in midfield. Well, Paisami has shown there was nothing to worry about as his partnership with Hamish Stewart has been excellent so far. Another Australian, Tevita Kuridrani, shone for the Brumbies but we opt for the hard-running Red.

12 Jamie Roberts (Stormers): This recent move to Cape Town appears to have given the Wales international a new lease of life. Roberts picked up the man-of-the-match award against the Jaguares as his strong carries, solid defence and general leadership of this young Stormers outfit once again stood out. He beats Sharks captain Andre Esterhuizen to this jersey. There’s life in the 33-year-old yet.

11 Makazole Mapimpi (Sharks): The World Cup winner was one of the Sharks’ stars as they claimed a crucial away victory against the Rebels. Mapimpi showed why he is one of the best finishers in the game as he scored two tries and could have added a third before unselfishly offloading to Curwin Bosch behind the Rebels’ try-line. Finished with 111 metres gained and comes in ahead of the Blues’ Mark Telea.

10 Noah Lolesio (Brumbies): Wallabies utility back James O’Connor is unlucky to miss out after impressing for the Reds against the Sunwolves but Lolesio gets the nod after a commanding display in difficult surroundings in his side’s away win against the Chiefs. The 20-year-old, who is in his first season of Super Rugby, played with a maturity beyond his years and was influential in breaking down the Chiefs’ defence as the Brumbies registered their first win in New Zealand since 2014.

9 Tate McDermott (Reds): Mentions right out the gate for Herschel Jantjies and Joe Powell, who starred for the Stormers and Brumbies respectively. However, it was Powell’s fellow Australian who got the nod here as he continued his great start to the season with a two-try showing against the Sunwolves. The Reds have been an entertaining watch so far in 2020 and McDermott is one of many bright sparks in their line-up. With Powell and McDermott in this form, the Wallabies’ scrum-half stocks are looking rosy moving forward.

8 Pete Samu (Brumbies): Fellow Australians Harry Wilson (Reds) and Isi Naisarani (Rebels) get mentions after also catching the eye but Samu is preferred after a big shift in Hamilton. The Wallaby back-row was superb on attack, gaining 37 metres from five carries which included two clean breaks, four defenders beaten and he scored a brace of tries.

7 Tom Christie (Crusaders): The 10-time champions turned on the style as they secured a deserved win over the Highlanders in Christchurch and Christie was one of the standout performers. The 21-year-old impressed with his breakdown work, did well with ball in hand and crossed the whitewash. He made his biggest impact on defence, however, and completed a match-high 20 tackles. The Sharks’ James Venter was next best.

6 Cullen Grace (Crusaders): The Brumbies’ Rob Valetini and Tom Robinson of the Blues came close to making our team but for the second week in a row Grace is chosen after a strong performance for the Crusaders. Grace did well on attack, gaining 57 metres from 10 carries which included three clean breaks and two offloads. He also stood out on defence and finished with 15 hits.

5 Mitchell Dunshea (Crusaders): The third Crusaders player in our side, the 24-year-old, like Cullen, also makes the team for the second successive week after another sterling effort for the champions. Dunshea gained 41 metres from five carries which included one clean break. Like Grace and Christie, he also made his mark on defence with 11 tackles as the second-row sees off Izack Rodda of the Reds.

4 Patrick Tuipulotu (Blues): The Stormers’ Salmaan Moerat and Ruben van Heerden of the Sharks had good games but the Blues skipper comes in ahead of them after a fine performance in his team’s narrow victory against the Bulls in Pretoria. Tuipulotu was a willing ball carrier, impressed with his lineout work and led his team well in difficult conditions which helped his side to secure the result.

3 Taniela Tupou (Reds): The Reds forwards dominated proceedings against the Sunwolves and the ‘Tongan Thor’ was at the forefront of the Australian team’s onslaught. The Wallaby stood up well in the scrums and made his mark on attack with a well-taken try early on. The Sharks’ Thomas du Toit also played well.

2 Alex Mafi (Reds): Codie Taylor of the Crusaders, the Brumbies’ Connal McInerney and Kerron van Vuuren of the Sharks all had good games but we could not ignore Mafi, who was superb on attack against the Sunwolves. The 23-year-old proved difficult to stop and finished with 53 metres gained from seven runs which included one clean break and four defenders beaten.

1 James Slipper (Brumbies): The Wallabies veteran came to the fore with a strong all-round showing against the Chiefs in Hamilton. Slipper delivered a solid scrummaging display, was lively on attack and also impressed in the execution of his defensive duties. Finished with a try assist and made six hits. Edges out Stormers captain Steven Kitshoff.