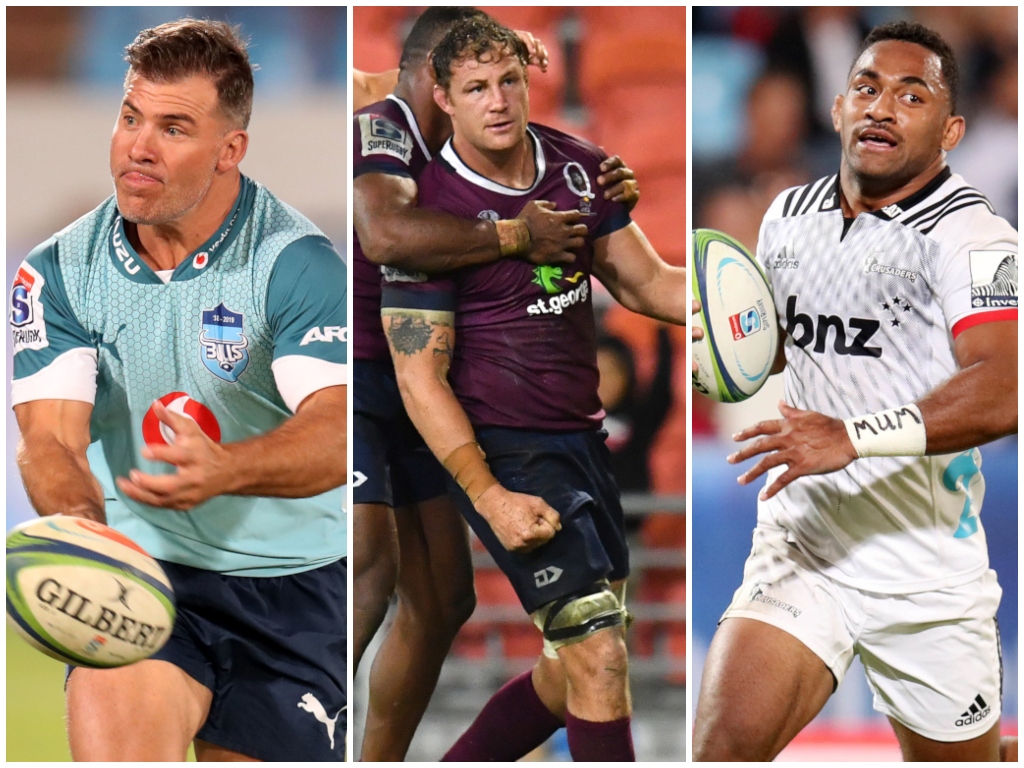 With the dust having settled on Round 17 of Super Rugby, we have gone through the action to pick out the best players from the past weekend.

Following their outstanding attacking display against the Rebels, the Crusaders lead the way with four players selected in the backline – and five overall – while the Jaguares, Brumbies and Reds are next best with two apiece in the XV.

Team of the Week: Super Rugby, Round 17

15 Emiliano Boffelli (Jaguares): This was probably the toughest one to call, with David Havili utterly brilliant for the Crusaders after making a staggering 177 metres and scoring two tries, but he just misses out to Boffelli, who was at the heart of the Argentine’s dominant victory over the Sharks. The 24-year-old was similarly potent in attack, making four clean breaks and beating seven defenders, while he also touched down twice and created another

14 Sevu Reece (Crusaders): The more the wing plays, the more you think he must feature for the All Blacks in the Rugby Championship. New Zealand have a plethora of options in the back three and, ultimately, Steve Hansen will probably go for the tried and tested at the World Cup – a competition which will see many fans using the likes of a paddy power sign up promo code to do their pre-tournament bets, but the head coach may want to give him an opportunity in the preceding tournament. Reece certainly deserves it after another stunning performance, which saw him score a hat-trick, make seven clean breaks and run for 137 metres. Elsewhere, the Hurricanes’ Ben Lam and the Jaguares’ Sebastian Cancelliere impressed against the Lions and Sharks respectively.

13 Tevita Kuridrani (Brumbies): It was another good week for the Canberra-based side and their outside centre, who continues to stand out in the latter part of the season. They won the Australian Conference on Saturday following an excellent first half display against the Waratahs where they touched down four times for a 28-3 advantage at the break. Kuridrani was to the fore, creating one try and consistently making it over the gain line, as he edged out the Hurricanes’ Peter Umaga-Jensen.

12 Ryan Crotty (Crusaders): There wasn’t too much to choose between the Crusaders man or his All Blacks team-mate Ngani Laumape, who was once again in fine form for the Hurricanes, but we’ve gone for the more experienced of the two. Crotty was crucial to his franchise’s brilliant attacking effort against the Rebels, linking play nicely in midfield and also being a significant threat himself with ball in hand. As a result, the 30-year-old ran for 90 metres, which included four clean breaks, and also did well on defence, making nine of his 10 tackles.

11 Braydon Ennor (Crusaders): Aphiwe Dyantyi was comfortably the Lions’ best performer in their disappointing loss to the ‘Canes, but he can’t really compete with Ennor, who crossed the whitewash three times and showed why he is so highly-rated. The flyer’s pick-up on the stroke of half-time, which saw him touch down for the second time, was absolutely sublime, while his pace and footwork caused numerous problems for the Rebels.

10 Richie Mo’unga (Crusaders): Has often been on the cusp of making the XV but has just missed out. However, not so this time as the fly-half shone in the Christchurch outfit’s dominant win over the Melbourne franchise. Varied his game superbly and the Rebels did not really know how to handle it. His kicks, whether cross-field or over the top of the first-up defence, were pinpoint, while his running game continually stretched the opposition rearguard. It meant that James Marshall, who stepped up nicely following Beauden Barrett’s late withdrawal, was a distant second.

9 Augustine Pulu (Blues): A tight battle between two New Zealanders as TJ Perenara had a good game in Johannesburg, but we’ve gone for the Blues player, despite their narrow defeat to the Reds on Friday. Pulu was a constant threat around the fringes and showed good sniping instincts to touch down twice. He also controlled the game pretty well, with the Aucklanders having the better of it for the majority of the 80 minutes, but it rather typified the franchise that they contrived to lose it.

8 Scott Higginbotham (Reds): The veteran Wallaby was in superb form in what was his final appearance for the Reds in Brisbane. The Bordeaux Begles-bound back-row proved a handful on attack, gaining 75 metres from 11 runs which included four clean breaks, a defender beaten and he crossed the the whitewash on two occasions. Comes in ahead of Jaco Coetzee of the Stormers and the Highlanders’ Luke Whitelock.

The Reds have edged the blues by one point in a brilliant Vodacom #SuperRugby match which saw Scott Higginbotham score his 41st try in the competition. pic.twitter.com/PveXi25eBM

7 Tom Cusack (Brumbies): Although he did not make much of an impact with ball in hand, Cusack grafted hard as the Brumbies clinched top spot in the Australian Conference courtesy of an impressive victory over the Waratahs. The 26-year-old scored one of his team’s four tries and did particularly well on defence with 11 hits. Beats out Jaguares veteran Juan Manual Leguizamon, who impressed in his side’s win over the Sharks.

6 Pablo Matera (Jaguares): Another superb performance from the Argentina international, who has played consistently well for the Jaguares this season. The 25-year-old was a willing ball carrier with 28 metres gained from 11 runs which included one defender beaten and he also managed three offloads. Matera was also at the forefront of his side’s defensive efforts where he made a game-high 16 tackles. The Hurricanes’ Reed Prinsep and Jordan Taufua of the Crusaders also caught the eye.

5 Sam Whitelock (Crusaders): Sam Carter and Marcos Kremer performed well for the Brumbies and Jaguares respectively but it’s the All Blacks second-row who gets into our team after another excellent showing during his side’s demolition of the Rebels in Christchurch. Whitelock did well in the lineouts but also made his presence felt on attack where he made 37 metres from six runs with one clean break, two defenders beaten and a couple of offloads, as well as 12 hits on defence.

4 Jackson Hemopo (Highlanders): Whitelock is joined in our team by fellow All Black Hemopo, who made his mark with a good all-round performance in his side’s draw with the Bulls in Dunedin. The second-row was excellent on attack where he ran for 32 metres from 11 carries with one defender beaten and three offloads. The 25-year-old also did well in the lineouts, as well as in defence where he completed 10 tackles. The Jaguares’ Tomas Lavanini was next best.

3 Taniela Tupou (Reds): The ‘Tongan Thor’ continued his superb form with a fine performance in his side’s narrow victory over the Blues. The Wallaby front-row gave a solid scrummaging performance but also had a lively game on attack where he gained 16 metres from six carries with two defenders beaten and he also scored a try from close range. Edges out Santiago Medrano of the Jaguares.

2 Schalk Brits (Bulls): The Hurricanes’ Dane Coles and Folau Fainga’a of the Brumbies impressed with try-scoring performances for their respective teams but it’s the Springbok veteran who gets the nod after a fine display for the Bulls in their draw with the Highlanders. The fleet-footed 38-year-old did well with ball in hand, gaining 35 metres from seven runs which included one clean break, three defenders beaten as well as an offload.

1 Steven Kitshoff (Stormers): Joe Moody and Mayco Vivas impressed for the Crusaders and Jaguares respectively but we’ve opted for the Stormers’ stand-in skipper, who had a solid game in his side’s triumph over the Sunwolves in Cape Town. The Springbok led from the from the front at the coalface of his side’s forward effort with his scrummaging particularly impressive. Also shone in the execution of his defensive duties where he completed nine hits.