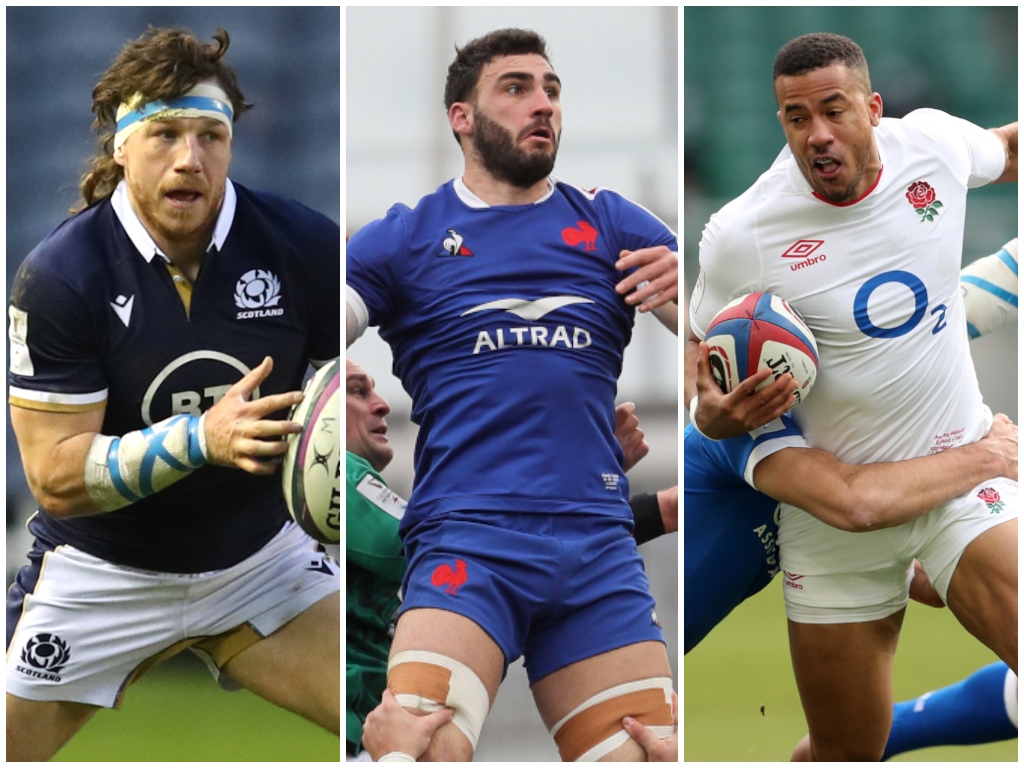 With the dust having settled on Round Two of the Six Nations, we take a look back over the matches to select our Team of the Week.

England lead the way with five nominations, while France are just behind on four. Celtic trio Ireland, Scotland and Wales are also well represented following a couple of enthralling matches.

Team of the Week: Six Nations, Round Two

15 Stuart Hogg (Scotland): Despite defeat, the Scottish captain was absolutely outstanding against Wales on Saturday. Like in the England game, Hogg was a solid presence at the back, but this time he showed a bit more in attack, running for a staggering 151 metres and scoring two tries. The 28-year-old therefore takes the position from Brice Dulin and Hugo Keenan, who had a great duel in Dublin on Sunday.

14 Louis Rees-Zammit (Wales): Announced himself on the world stage with a two-try showing in Wales’ narrow 25-24 triumph over Scotland at Murrayfield. Rees-Zammit is one of the quickest players in the game and he showed all his talent to touch down for two brilliant finishes. The first was impressive as he stepped inside and sauntered over, but his second was particularly excellent as the 20-year-old received the ball around halfway. The Gloucester flyer then left the outstanding Duhan van der Merwe trailing in his wake before chipping the ball over the top and recollecting to score. A real talent, who could well force his way into the Lions squad.

13 Garry Ringrose (Ireland): There was a much improved showing from England’s Henry Slade, who was finally able to show what he can do after actually receiving some ball, but we’ve gone for the Irishman. In a narrow loss, Ringrose was tireless, consistently challenging the sturdy French defence with his footwork and balance. He made a number of half breaks, regularly getting his side on the front foot, and finished the match with 93 metres made from 11 carries.

12 Gael Fickou (France): While Ringrose’s qualities were shown in attack, Fickou impressed in defence, leading the line and finishing the game with 10 tackles made and none missed. The Stade Francais man is highly-rated by coach Shaun Edwards and his leadership qualities are pivotal to Les Bleus’ cause. As a result of Ireland’s ability to keep hold of the ball and control territory, Fickou didn’t get his hands on it much but, when he did, the 26-year-old was dangerous, setting up Charles Ollivon’s try with a neat off-load. Elsewhere, his opposite number, Robbie Henshaw, had a good game, while Wales’ Uilisi Halaholo was excellent against Scotland after coming on.

And just like that, @FranceRugby have the first score of the game!

Charles Ollivon runs in the try after some slick play from the French ensemble 👏 🇫🇷#GuinnessSixNations #IREvFRA pic.twitter.com/ShoWQnS6Iv

11 Anthony Watson (England): There were a number of good performances on the left wing, with James Lowe (Ireland), Monty Ioane (Italy), Duhan van der Merwe (Scotland) and Jonny May (England) all impressing, but we simply had to get May’s team-mate into the side. Watson has had his critics recently but the Bath flyer looked almost back to his best against Italy, touching down twice and running for 160 metres in the dominant 41-18 triumph.

10 George Ford (England): Eddie Jones restored the Ford-Farrell playmaking axis and the former certainly did his bit as the Red Rose’s attack showed an improvement. He took the ball flat to the gain line, manipulated the Italian defence well and generally took the right options, whether it was to kick, pass or run. England look much more fluid with Ford at fly-half and Jones will surely keep him in the role for the Wales game. Elsewhere, Matthieu Jalibert once again did well for France and there were some decent touches from Finn Russell, but the Scottish pivot hasn’t quite found his best form yet in the Six Nations.

9 Antoine Dupont (France): It wasn’t the swashbuckling performance we’ve come to expect from the Toulouse genius, but he was still mightily impressive as they overcame Ireland 15-13. He didn’t have too much front foot ball in the opening 30 minutes but, once France finally sorted out their set-piece issues, Dupont brought a few of his skills to the party. The scrum-half’s passing was crisp and, as ever, his option taking was sound, which kept the Irish defence guessing. He was also excellent on defence and showed his strength at the contact area to win a turnover. His all-round game keeps out Kieran Hardy and Dan Robson, who were both lively when they came on as replacements for Wales and England respectively.

8 Gregory Alldritt (France): Another outstanding showing from the France number eight as he carried superbly to help steer his team to a second successive Six Nations win this year. Facing him was CJ Stander, who performed well once again, while Matt Fagerson and Taulupe Faletau were both impressive in the Scotland versus Wales game. However, Alldritt made 89 metres on Sunday as he really caught the eye and continues to impress us.

Watching the @IrishRugby game back for @offtheball later. Gregory Alldritt is a beast! His meters after contact are exceptional.

7 Hamish Watson (Scotland): Speaking of consistent performances, this Scottish flanker’s name must surely be written in pen in Warren Gatland’s British & Irish Lions book after back-to-back strong showings. In our eyes he got the better of Justin Tipuric at Murrayfield while elsewhere, England workhorse Tom Curry went well but no one came close to Watson. Not the biggest back-row but boy he’s tough and was unlucky to finish on the losing side.

6 Charles Ollivon (France): Leading by example as France captain, Ollivon got the ball rolling in terms of tries in Dublin as he showed his free-scoring record in 2020 was no flash in the pan. It wasn’t just his well taken finish that caught the eye as defensively was where he also proved his worth to the team by making 19 tackles. Mentions for the blindside shirt go to England’s Courtney Lawes, Italy’s Sebastian Negri and Rhys Ruddock for Ireland, who were all tireless.

5 Iain Henderson (Ireland): Harsh on Jonny Hill after his try-scoring day at the office for England, but Henderson skippered his Ireland troops extremely well against France and certainly stepped up in the absence of regular leaders. His work at the lineout was admirable while the Ulster lock also got around the field in typically hard-nosed fashion. There’s also a mention here for Wales veteran Alun Wyn Jones as he toiled away in victory.

4 Maro Itoje (England): It says something that there wasn’t a great deal mentioned about Itoje over the weekend but still he makes our team. He was everywhere once again in the white jersey as he edges out Ireland’s Tadhg Beirne and Scotland’s Scott Cummings for this spot. The Saracens forward made 41 metres with ball in hand and backed that up with 13 tackles and slick handling and decision making. An unbelievable athlete and rugby player.

3 Kyle Sinckler (England): Player of the Match in England’s victory over Italy on Saturday after a strong day at the office from the tighthead. Sinckler has since been praised by head coach Eddie Jones and we’re in agreement he can be the world’s best number three, if he can keep his temper in check.

2 Luke Cowan-Dickie (England): Was given a chance to impress ahead of the benched Jamie George and certainly took it against Italy at Twickenham, putting in a typically physical performance that had flashes of skill thrown in. Julien Marchand came close to nicking this shirt after his efforts on Sunday but we just felt Cowan-Dickie’s all-action showing had to be rewarded. The big question now is has he done enough to usurp George as England’s starter?

1 Wyn Jones (Wales): Backed up last week’s Player of the Match performance with another decent outing, this time against Scotland. Jones threw a try in for good measure in Round Two as he gets in ahead of Rory Sutherland, with these two looseheads putting their hands up for a spot in the Lions squad.