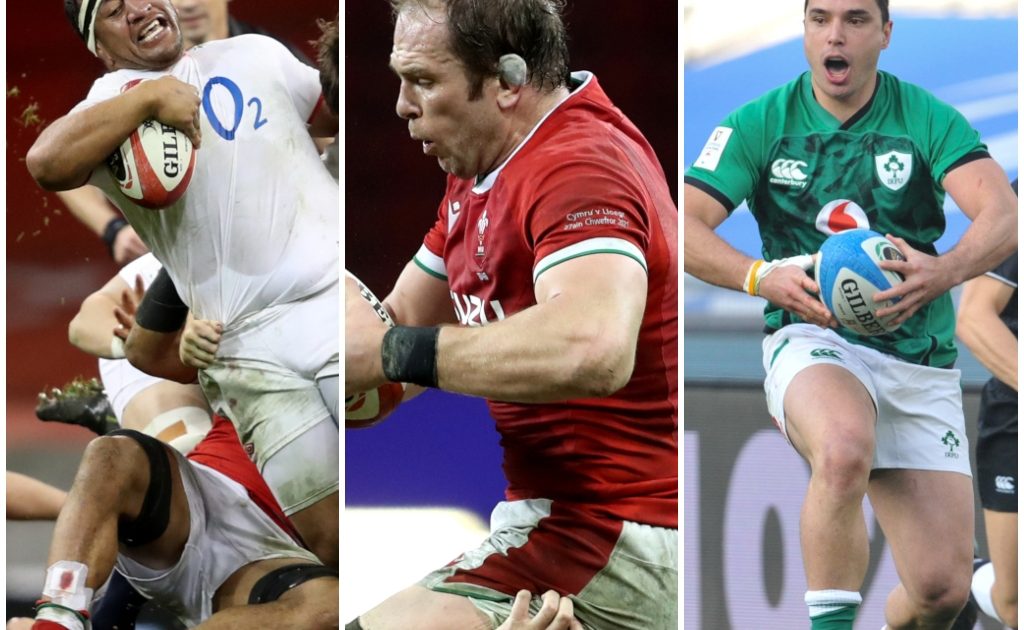 With the dust having settled on a truncated Round Three of the Six Nations, we take a look back over the matches to select our Team of the Week.

France’s encounter with Scotland was postponed and it is uncertain when – or even if – it will be played, but two of the games did go ahead at the weekend.

All four teams that competed are represented, but Ireland and Wales unsurprisingly lead the way following their victories over Italy and England respectively.

Team of the Week: Six Nations, Round Three

15 Hugo Keenan (Ireland): The Leinster youngster has settled in wonderfully at the highest level and produced another excellent display in Ireland’s dominant 48-10 victory over Italy in Rome. He is solid under the high ball, has a good skill set and is a threat on the counter-attack. All those were in evidence at the weekend as Keenan touched down once and ran for 66 metres from seven carries, edging out Wales’ Liam Williams.

14 Anthony Watson (England): The Bath flyer is back on form and was a constant threat against Wales, despite the Red Rose eventually going down 40-24 in their Six Nations clash. Watson finished his try well after being released by Jamie George’s pass and often caused problems for the opposition defence when given the ball. He was the best of the right wings, with Louis Rees-Zammit, Luca Sperandio and Ireland duo, Jordan Larmour and Keith Earls, all comparatively quiet on attack.

13 George North (Wales): This was a tough selection as Garry Ringrose was absolutely superb for Ireland, but North shone on his 100th cap. It wasn’t necessarily just his efforts with the ball that impressed – albeit 66 metres from 10 carries is excellent – as the 28-year-old also stood out defensively. Alongside the inexperienced Rees-Zammit, his work in the outside channels was wonderful, making it much easier for the youngster to deal with England’s attack. The Red Rose looked to stretch that Welsh defence but North shut down the flying Jonny May on several occasions and ended the match with 10 tackles.

12 Robbie Henshaw (Ireland): Although England’s Owen Farrell produced his best international performance for some time – perhaps even since the World Cup – we’ve gone for Ireland’s backline linchpin. Henshaw does everything so well, from defending to carrying and also making the right decisions with ball in hand. The Leinster centre was a ubiquitous presence as they thrashed the Italians in Rome, running for 56 metres and making 13 tackles.

11 James Lowe (Ireland): Another Irishman in the backline with the New Zealand-born wing enjoying the space afforded to him by the flimsy Italian defence. Lowe has incredible acceleration and balance, and is also a difficult man to bring down. Was denied a try when Craig Casey’s pass to him was deemed forward, but still contributed plenty in attack, making a staggering 125 metres. As a result, Lowe edges out Jonny May, who worked incredibly hard for England and had plenty of success in the air.

10 Callum Sheedy (Wales): The Bristol fly-half may have only played 36 minutes but he made such an impression that we had to include him in the XV. As England came back into the contest and with the Welsh fielding inexperienced half-backs, you wondered whether the hosts would crumble, but the opposite was the case. Sheedy thrived, kicking impressively out of hand and off the tee, and also threatened in attack by playing flat to the line. Johnny Sexton is unfortunate to miss out having responded to the criticism and question marks over his form with a fine display, but the Welshman deservedly takes the position.

The game that had a bit of 𝙚𝙫𝙚𝙧𝙮𝙩𝙝𝙞𝙣𝙜!

9 Kieran Hardy (Wales): It was a big call from head coach Wayne Pivac to select the Scarlets scrum-half in the side, but the lively 25-year-old repaid the faith shown in him with a superb display. Hardy was sharp from the base and also a threat around the fringes, scoring a fine try after catching the English defence unawares, but he also had a sound kicking game. That was always the concern going into the match but Welsh fans needn’t have worried as Hardy shone.

8 Taulupe Faletau (Wales): He was involved in an entertaining direct duel with England’s Billy Vunipola in Cardiff but it’s the Bath powerhouse who gets the nod after an outstanding all-round performance. Faletau was superb on attack, gaining 112 metres from 18 carries but also did his bit on defence with 11 tackles made. His brilliant showing saw him walking off with official man of the match award after the game. Ireland’s CJ Stander also performed well.

7 Johan Meyer (Italy): Despite the Azzurri coming off second best in most facets of play during their defeat to Ireland, Meyer was one player who emerged with his reputation intact as he delivered an excellent performance. From the outset, Meyer took the fight to his opponents and received a fitting reward when he crossed for a try on the stroke of half-time. In the end, he finished with a team-high 56 metres gained from eight carries which included two clean breaks and four defenders beaten. Wales’ Justin Tipuric and Tom Curry of England were next best.

6 Josh Navidi (Wales): This was a difficult choice as Sebastian Negri and Tadhg Beirne had good games in the Italy v Ireland contest but, in the end, Navidi gets in after a solid outing against England. The Cardiff Blues tearaway returned to Wales’ starting line-up and hit the ground running, especially on defence where his organisational skills played a big part in helping his team to secure the win. Eventually completed a team-high 12 hits.

5 James Ryan (Ireland): After missing his side’s Round Two defeat to France, the 24-year-old was back in action against Italy and underlined his importance to Andy Farrell’s side with another superb performance. Ryan did what was expected of him in the lineouts, performed well in the loose but made his biggest impact on defence as he finished with a team-high 17 tackles made.

After captaining his side to victory against England Alun Wyn Jones is spotted helping the ground staff clear the ground yesterday…
Leadership and Culture is simply behaviours and actions 👇
🗣"The standard you walk past is the standard you accept." pic.twitter.com/VxEwrMw4o8

4 Alun Wyn Jones (Wales): Although he wore the number five jersey for Wales, we had to find a place for him and he makes our team as the front lock after another great effort in his side’s triumph over England. As usual, the 35-year-old’s leadership was outstanding and he also caught the eye in the lineout and on defence as he finished the game with 10 tackles made.

3 Tadhg Furlong (Ireland): It looks like his well documented injury problems are now well and truly behind him as he put in an energetic effort during a 47-minute stint against against Italy in Rome. Furlong stood up well in the scrums, was a willing ball carrier and also made his mark on defence with eight hits, which is a superb effort as he was on the field for just over a half.

2 Ronan Kelleher (Ireland): Another Leinsterman in our team, Kelleher made his first Six Nations start – since making his Test debut against Scotland during the 2020 tournament – and made a big impact in Ireland’s win over Italy. Did what was expected of him in the tight, especially his throw-ins in the lineouts which found his jumpers with regularity. The 23-year-old also did well as a ball carrier, gaining 20 metres from seven runs with one clean break and a defender beaten, and also made nine tackles. Beats out Ken Owens of Wales.

1 Mako Vunipola (England): The Saracen put in another huge shift and despite finishing on the losing side, will be happy with his personal performance in Cardiff. The 30-year-old came to the fore with a good all-round display. In the scrums, his battle against Tomas Francis was compelling, but it was in the loose where he made the most impact. Vunipola carried hard and showed some typically deft touches with ball in hand, while he was also solid in defence, eventually completing eight hits.