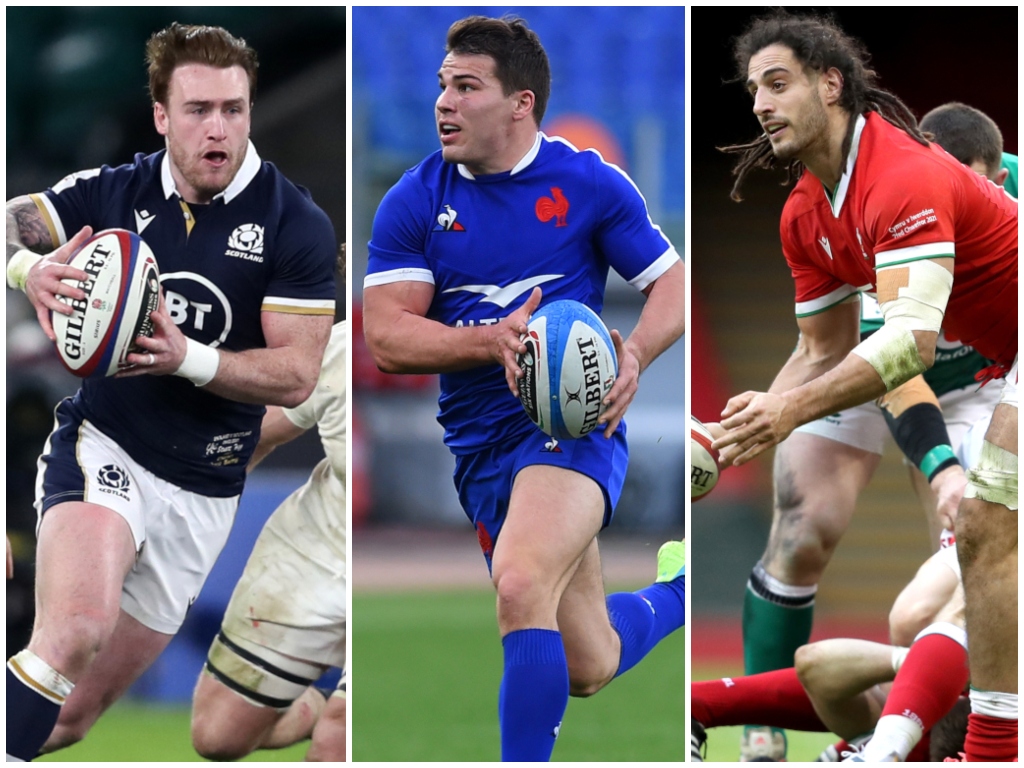 With the dust having settled on Round One of the Six Nations, we take a look back over the recent matches to select our Team of the Week.

Unsurprisingly, Scotland lead the way with eight nominations after their incredible victory over England at Twickenham, while Wales and France are the next best with three apiece.

Team of the Week: Six Nations, Round One

15 Stuart Hogg (Scotland): A classy presence at the back for Gregor Townsend’s men as he captained Scotland to their first victory over England at Twickenham since 1983. Hogg was in superb form, counter-attacking when given the opportunity, marshalling things well in the back three and also using his booming boot to great effect. He fends off competition from France’s Brice Dulin, Ireland’s Hugo Keenan and Wales’ Leigh Halfpenny to take his place in the side.

14 Teddy Thomas (France): An enigma at times but no doubt one of the best wings in the world when on form and the Racing 92 man produced an exceptional display against Italy. The Azzurri failed to contain Thomas with the speedster running for 95 metres, scoring two tries and setting up another in the dominant 50-10 triumph in Rome. Elsewhere, Sean Maitland was solid under the high ball for Scotland and was also a threat in attack when the chance presented itself.

13 George North (Wales): The decision to move him to centre from the wing may have received plenty of criticism but, on the basis of Sunday’s performance, it could well be a long-term option for head coach Wayne Pivac. North showed his try-scoring instincts to take advantage of an Ireland error to touch down before he helped set up Louis Rees-Zammit’s score with a fine pass under pressure. The Ospreys player also impressed in defence, making 10 tackles, meaning he takes the position from France’s Arthur Vincent.

12 Cameron Redpath (Scotland): This was a very close call between the Scottish debutant and Ireland’s Robbie Henshaw, but we’ve ultimately gone with the boy wonder, who adapted superbly to the Test arena. Redpath is only 21 but looked calm and composed throughout, showing his passing ability and silky smooth running style. He was also solid on defence, making five tackles and also winning a turnover at the breakdown, which helped him get the nod over Henshaw.

11 Duhan van der Merwe (Scotland): Another recent newcomer to the Scottish side, although slightly more experienced at international level than Redpath, the South Africa-born powerhouse has adapted well to the highest level. His power and pace was evident against England as he scored the only try of the match to take the position from Ireland’s James Lowe and France’s Gabin Villiere.

10 Matthieu Jalibert (France): Another close call as Finn Russell was typically excellent for Scotland, but he loses a mark for his rather cynical trip which cost him a yellow card. Fortunately for the fly-half, his team-mates were superb during the 10 minutes he was off the field, but it means Jalibert edged ahead of him in our XV. The French playmaker continued where he left off in the Autumn Nations Cup, dictating play superbly and displaying all his control to help Les Bleus to a comfortable win. There were some neat individual moments too, including a fine break which led to Thomas’ first try.

9 Antoine Dupont (France): A consummate performance from Les Bleus’ brilliant scrum-half after he created a staggering four tries in the 50-10 victory over Italy. After winning the player of the Six Nations award in 2020, he has continued in that fashion and was once again at the heart of everything the visitors did well. It was an easy choice to select him in the XV but credit to Stephen Varney, who showed up well despite Italy’s troubles, and Scotland’s Ali Price, who was accurate with both passing and kicking.

8 Matt Fagerson (Scotland): Another one of Scotland’s heroes, Fagerson caught the eye as a ball carrier – especially at close quarters – in difficult conditions at Twickenham. He eventually gained 30 metres from 16 carries and won his direct duel with Billy Vunipola by a country mile. Ireland’s CJ Stander was next best after impressing in a losing cause in Cardiff.

7 Hamish Watson (Scotland): There were fine performances from Justin Tipuric of Wales and Les Bleus tearaway Dylan Cretin but Watson gets the nod after delivering arguably his best performance at Test level for Scotland. The 29-year-old impressed with some strong attacking runs and did well on defence, with 11 hits, but it’s his jackalling which was the standout feature of his game. Apart from winning some turnovers, Watson forced several penalties at the breakdown which played a big part in his side’s success.

6 Josh Navidi (Wales): He was forced to come on as a blindside flanker against Ireland, after Dan Lydiate’s departure early on through injury, and the Cardiff Blues stalwart slotted in seamlessly, shining in most facets of play. Navidi was his usual busy self at the breakdowns but made his biggest contribution on defence and eventually made 22 tackles.

5 Alun Wyn Jones (Wales): Ireland’s Iain Henderson and Jonny Gray of Scotland had good games but we had to go with the Welsh skipper, who put in an excellent performance in his side’s win at the Principality Stadium. The 35-year-old was excellent in the lineouts and at the kick offs but also gained valuable ground with ball in hand and shone on defence with 23 tackles made.

4 Tadhg Beirne (Ireland): Although Ireland came up short against Wales, it wasn’t through a lack of effort from the Munsterman. Beirne caught the eye with his high work-rate, especially as a ball carrier where he gained 28 metres from a match-high 21 carries and was rewarded with a try for his efforts. Also did what was expected of him in the lineouts and contributed on defence with 10 hits. Scott Cummings of Scotland was next best.

3 Zander Fagerson (Scotland): This was a tough choice as Andrew Porter also had a good game for Ireland against Wales but Scotland’s memorable triumph over England was set up by their forwards, especially their front-rowers, who were all superb. Fagerson excelled in the execution of his core duties, especially in the scrums which he anchored superbly.

2 George Turner (Scotland): Came into Scotland’s run-on side due to the unavailability through injury of Stuart McInally and Fraser Brown but Turner was one of Scotland’s stars as he produced an outstanding all-round display. Made his mark with excellent throw-ins at the lineouts and put Van der Merwe in the clear with a well-timed pass before the wing powered over for his try. Turner comes in ahead of Julien Marchand of France.

1 Rory Sutherland (Scotland): Came to the fore with another brilliant all-round display at Twickenham. Scotland gave England a torrid time in the scrums with the Edinburgh strongman winning his direct duel with Will Stuart. Sutherland was also a willing ball carrier and is preferred to Wyn Jones of Wales and Cyril Baille of France.