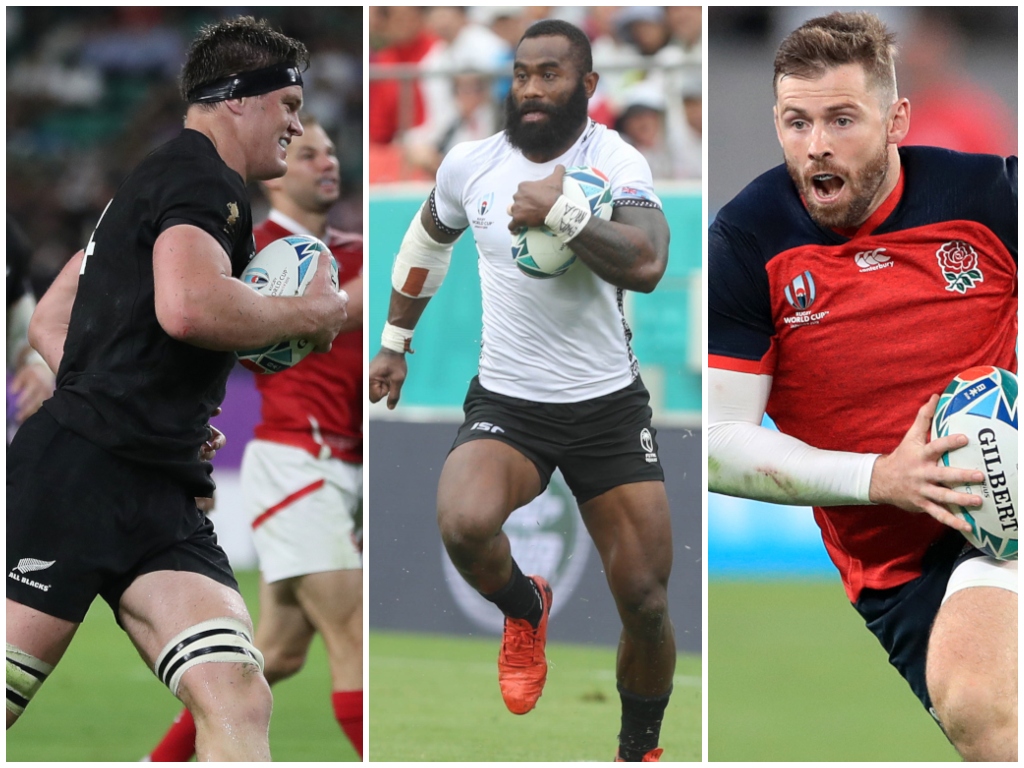 With the dust having settled on the third round of the Rugby World Cup, we have gone through the action and picked the standout players.

Following dominant performances, New Zealand, South Africa and England are all well-represented with three players apiece, while France are the next best with two. Make sure to leave your comments at the bottom of the page with your own team.

Team of the Week: Rugby World Cup, Round Three

15 Elliot Daly (England): Despite Beauden Barrett’s outstanding display for New Zealand against Canada last week, we have gone for the Englishman, who produced an excellent effort in their crucial game versus Argentina. It was Daly’s most adept performance in the position as the former Wasps player was solid under the high ball, counter-attacked well and was creative in the wider channels. He ran for 111 metres in total, which included two clean breaks, and was rewarded with a try.

14 Cheslin Kolbe (South Africa): It was another stunning effort from the Toulouse flyer as he cut the Italian defence to shreds. Kotaro Matsushima was once again excellent in Japan’s victory over Samoa but we could not ignore the South African wing, who was named man of the match on Friday. Conor O’Shea’s men failed to deal with Kolbe as he crossed the whitewash twice and made 94 metres.

13 Tevita Kuridrani (Australia): Hadn’t featured in the competition before Saturday due to the form of James O’Connor and Samu Kerevi, but he made up for lost time by impressing in the Wallabies’ midfield. The 28-year-old touched down twice and ran for an impressive 123 metres, meaning that Kuridrani has potentially forced his way into the squad for the upcoming games. Mali Hingano (Tonga) and Lukhanyo Am (South Africa) also shone but they did not do enough to usurp the excellent Australian.

12 Sonny Bill Williams (New Zealand): It was a choice between two New Zealanders with Anton Lienert-Brown also showing up well during the past week, but we felt the vastly experienced Williams did enough to claim the place. The Blues player, who was part of the 2011 and ’15 World Cup victories, has had his doubters leading into the 2019 global tournament but he looked fit and sharp as the All Blacks thrashed Canada. His off-loading and kicking game was to the fore as he set up two tries while the 34-year-old showed plenty of pace to run for 95 metres, which included three clean breaks.

11 Semi Radradra (Fiji): Arguably one of the performances of the World Cup so far came from the talented Fijian as they thrashed Georgia on Thursday. There was plenty of competition for the left wing slot with Alivereti Raka, Lomano Lemeki and Jonny May all excelling for France, Japan and England respectively, but it was an easy decision to include Radradra. Following two tries, three assists and 176 metres made, which included a staggering six clean breaks, the Fiji back was utterly outstanding.

If you were building the perfect rugby player, Semi Radradra would be a pretty good blueprint 💪✨

10 George Ford (England): The Leicester fly-half surprisingly has his detractors but he has stepped up impressively over the past couple of months and continued his fine form against Argentina. With Ben Youngs and Farrell struggling at times on Saturday, Ford was the Red Rose’s linchpin and guided the team around the field superbly. He also set up two tries and then scored the crucial bonus-point himself as England qualified for the quarter-finals.

9 Faf de Klerk (South Africa): The livewire Springboks scrum-half is being pressurised by youngster Herschel Jantjies for his position, but the 27-year-old was much better on Friday as they crucially beat Italy to put them in pole position to qualify for the last-eight. De Klerk’s box-kicking was pinpoint while his up-tempo game enabled South Africa’s big runners to consistently get over the gain line. New Zealand duo TJ Perenara and Brad Weber were the next best, excelling in the position at various points over the past week.

8 Kazuki Himeno (Japan): This was a tough one as both Beka Gorgadze (Georgia) and Lewis Ludlam (England) had their moments, but Himeno continues to be an important part of that Japanese back-row. Although he didn’t quite have the same impact in attack as he did against Ireland, the Brave Blossoms’ back-rower displayed his all-round skill set by turning over ball and defending well, as he made 11 tackles.

7 Sam Underhill (England): A brutal defender and an improving carrier, Underhill was named man of the match in the Red Rose’s triumph over Argentina and will be crucial over the coming weeks if they are to go deep in the competition. Underhill produced a number of dominant hits on Argentinian attackers and ended the game with a team-high 16 tackles, meaning that he gets the place over Japan’s Pieter Labuschagne and Russia’s Tagir Gadzhiev.

6 Charles Ollivon (France): Arguably the toughest position to call this week with Pieter-Steph du Toit and Rhys Ruddock both putting their hand up for South Africa and Ireland respectively, but Ollivon starred for Les Bleus in a tough victory over Tonga. Was cruelly denied a wonderful try for a forward pass, which would have rounded off an excellent display as the flanker ran for 69 metres and made 14 tackles.

5 Lood de Jager (South Africa): Another brutal display by the gargantuan second-row in the Springboks’ dominant triumph over Italy. Always does the hard work in the tight and gives his team front-foot ball, while the 26-year-old’s lineout skills are exemplary. De Jager’s athleticism is also useful when it comes to defensive work and he made a team-high 11 tackles against the Azzurri on Friday.

4 Scott Barrett (New Zealand): Despite dropping the ball over the line, that hasn’t counted against him too much as he was otherwise outstanding versus Canada. The Barrett brothers made history by becoming the first sibling trio to start a World Cup match since the Vunipolas in 1995, but they went one better and all managed to touch down. Scott was the final of the three to score, rounding off what was an excellent individual performance, which saw him make 49 metres and 11 tackles. England’s Maro Itoje, who was a continual nuisance to the Argentinians, also deserves a mention.

🚨 TEAM ALL BLACKS EXCLUSIVE | Join Beauden, Jordie and Scott Barrett as they reveal what it was like to play at #RWC2019 together.

3 Angus Ta’avao (New Zealand): Not too many tightheads stuck their hand up this week, although Tonga’s Ma’afu Fia and England’s Kyle Sinckler produced good displays, but we were impressed by the energy Ta’avao brought to the game on Sunday. Owen Franks was omitted from their World Cup squad due to his apparent deficiencies in the loose, but the Chiefs man has no such problems in that area. Ta’avao carried hard and got around the field well as the All Blacks improved in the second half against Namibia.

2 Camille Chat (France): The Racing 92 hooker got through a mountain of work as the French edged past their Pacific Island opponents at the weekend. He was crucial to their win as he barrelled through a number of would-be Tongan tacklers and ended the match with a superb 49 metres made. Chat’s lineout throwing has often let him down but even that was far more solid and that has put him in contention to start France’s game against England this Saturday. As a result of that display, the 23-year-old forced the USA’s impressive front-rower Joe Taufete’e down the pecking order.

1 Siegfried Fisi’ihoi (Tonga): The Tongan scrum was solid against both England and Argentina, but it became a potent weapon on Sunday. After struggling in the opening 10 minutes, as they went 10-0 down, their front-row arguably kept them in the game. Fisi’ihoi was very much to the fore, getting the better of France’s Rabah Slimani, and resulted in the French tighthead being replaced after 53 minutes. He also carried hard and defended well, making 11 hits, as he took the position from Ireland’s Dave Kilcoyne, who was one of the few positives from their error-strewn triumph over Russia.