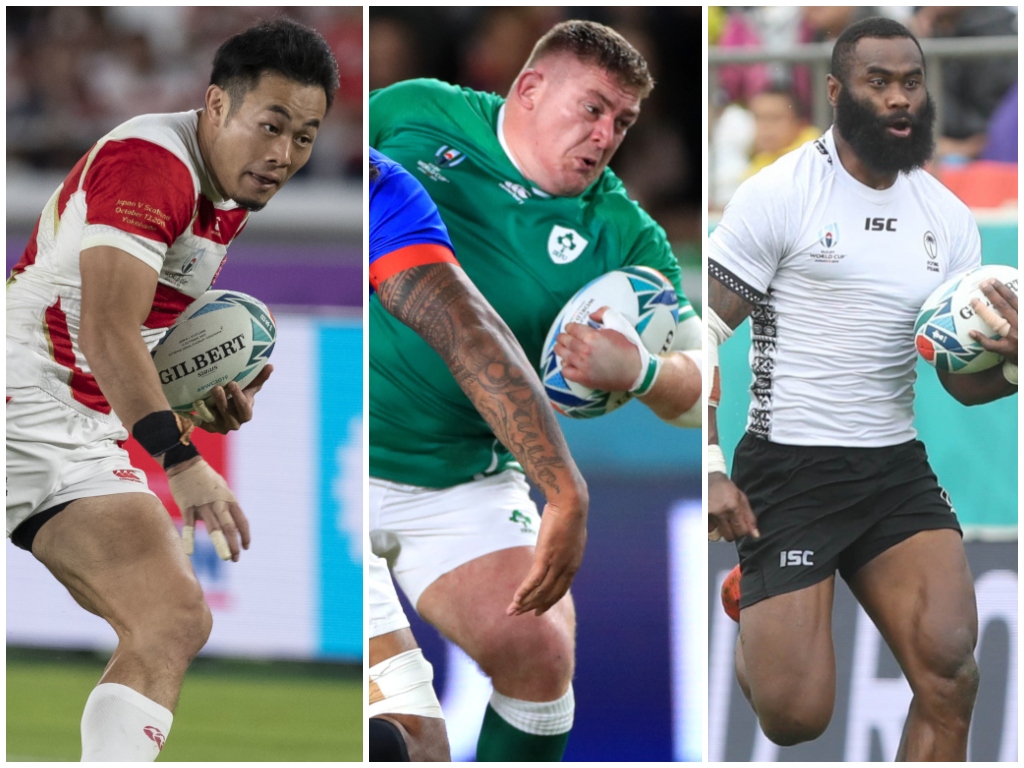 With the dust having settled on the fourth round of the Rugby World Cup, we have gone through the action and picked the standout players.

Ireland lead the way with five representatives in our side while Japan are next best with four. Make sure to leave your comments at the bottom of the page with your own team.

Team of the Week: Rugby World Cup, Round Four

15 Jordan Larmour (Ireland): Provided the Irishmen’s attacking spark in their dominant victory over Samoa on Saturday, making 66 metres which included two clean breaks and a superb 11 defenders beaten. Rob Kearney is the preferred option in the big games due to his experience and solidity under the high ball but Larmour is pushing him after this effort. The 22-year-old’s positioning was much better at the weekend, while he offers more with ball in hand, which was demonstrated by the try and assist he garnered. South Africa’s Damian Willemse was next best following his showing against Canada last Tuesday.

14 Semi Radradra (Fiji): Played at left wing but he popped up all over the field against Wales on Wednesday. We therefore had to include him somewhere in this side after another incredible display, which saw him cause the Welsh all sorts of problems. In total, Radradra ran for 124 metres, beat seven defenders and set up a try. His selection of course means that Josua Tuisova misses out, while Argentina’s Bautista Delguy and Japan’s Kotaro Matsushima also didn’t do quite enough to get in the XV.

13 Jonathan Davies (Wales): It is tough on both Juan Cruz Mallia (Argentina) and Timothy Lafaele (Japan), who were both outstanding against USA and Scotland respectively, but Davies was crucial to Wales’ triumph over Fiji. The British and Irish Lions centre made one particularly vital contribution as he produced a fierce hand-off to break through and off-load for Josh Adams’ hat-trick. The 31-year-old is also very good defensively and he needed to be with the likes of Radradra and Tuisova causing problems.

12 Ryoto Nakamura (Japan): The Brave Blossoms’ centre has been solid throughout the competition but he produced his best display when it mattered as they beat Scotland to qualify for the quarter-finals.. Although the Suntory Sungoliath’s player is not necessarily the biggest, he is strong and provides vital front foot ball for their outside backs to thrive. Nakamura knits the backline together nicely and also rarely misses a tackle, after making 11 hits on Monday. As a result, South Africa’s Frans Steyn, who was in pole position before the final day in the pool stages, misses out.

11 Kenki Fukuoka (Japan): Australia’s Marika Koroibete is unfortunate to be left out, while it is difficult to overlook Wales’ Josh Adams, who has scored four tries in the past week, but national hero Fukuoka produced a stunning performance on Sunday. The wing will be leaving the sport following the World Cup to become a doctor, which would be a shame given his thrilling displays for Japan over the years. His latest outstanding effort saw him touch down twice against Scotland, set up Kotaro Matsushima’s try and be an absolute thorn in their opponents’ defence throughout.

It was an incredible night in Yokohama as Japan and Scotland produced a game for the ages.

To mark an historic first ever quarter-final for the hosts, we’ve got a special #RWCEpicMoments lined up….

10 Johnny Sexton (Ireland): The fly-half only played 50 minutes, with Joe Schmidt taking the opportunity to rest their injury-prone pivot ahead of the quarter-finals, but Sexton was excellent during his time on the field. The 34-year-old crossed the whitewash twice, was accurate off the kicking tee and controlled play expertly as the Irish secured a dominant victory which took them into the last-eight. Meanwhile, Nicolas Sanchez displayed all his qualities in Argentina’s triumph over the USA.

9 Yutaka Nagare (Japan): After scoring a quick-fire hat-trick for the Springboks, Cobus Reinach was supposed to be a certainty for this position. That was until Japan’s game with Scotland as Nagare helped his side to dominate the opening period from scrum-half. The diminutive playmaker was sharp at the base and gave lightening quick service throughout the first 40 minutes, which allowed the likes of Fukuoka and Matsushima to weave their magic. This was his best display in what has been an exceptional tournament for him personally and, as a result, Nagare edges out Reinach and Wales’ Gareth Davies.

8 CJ Stander (Ireland): There were good performances from Wales duo Ross Moriarty and Aaron Wainwright against Fiji and Uruguay respectively, and Kazuki Himeno and Blade Thomson also impressed when Japan and Scotland faced off on Sunday, but Stander gets the nod after shining for Ireland in their win against Samoa in Fukuoka. Stander was solid on attack, gaining 31 metres from 22 carries with two defenders beaten, and scored a try late on.

7 Jamie Ritchie (Scotland): The Edinburgh tearaway came to the fore with a brilliant showing in a losing cause for Scotland against Japan in Yokohama on Sunday. The 23-year-old emptied the tank on defence with 24 tackles and also did well as a ball carrier with 30 metres gained from six runs which included a clean break and three defenders beaten. Comes in ahead of Wallaby veteran David Pocock and Springbok skipper Siya Kolisi, who played well in their sides’ victories over Georgia and Canada.

6 Aaron Shingler (Wales): Michael Leitch and Magnus Bradbury were superb in their duel during the Japan v Scotland match but Shingler gets into our team after putting in a huge shift in Wales’ victory over Uruguay. Shingler gained 45 metres on attack from 16 runs which included a clean break, four defenders beaten and two offloads. Also did well on defence with eight tackles.

5 James Ryan (Ireland): The Leinsterman beats out Scotland’s Jonny Gray and Rory Arnold of Australia after a fine performance at the coalface of Ireland’s forward effort against Samoa. The 23-year-old was dominant in the lineouts but also impressed on attack, especially at close quarters where he gained 19 metres from nine carries.

4 RG Snyman (South Africa): The Springboks were in rampant mood in a one-sided victory over Canada in Kobe and the Bulls second-row was at the heart of the action. Snyman completed 49 running metres from nine carries which included two clean breaks, four defenders beaten and also managed a couple of offloads. His efforts resulted in him walking off with the official man-of-the-match award.

3 Tadhg Furlong (Ireland): Ireland’s pack stood up well to the physical challenge posed by Samoa and Furlong was one of their standout players. Took the fight to the Pacific Islanders from the outset and scored a superb try during that game’s early stages. Furlong eventually gained 27 metres from seven carries from two clean breaks and also beat five defenders. Australia’s Taniela Tupou was next best.

There were a couple of Tadhg Furlong specials last night in Fukuoka. pic.twitter.com/0jlnlDKyaN

2 German Kessler (Uruguay): Although Wales proved too strong for Los Teros it was not through a lack of effort from their hooker, who delivered an excellent all-round display in that encounter. Kessler was phenomenal on defence and made 20 hits before being replaced in that game’s latter stages. He also did well with ball in hand, gaining 25 metres which included a try. Japan veteran Shota Horie also caught the eye in his team’s memorable triumph against Scotland.

1 Keita Inagaki (Japan): Cian Healy and Scott Sio were superb for Ireland and Australia respectively but we’ve opted for the Brave Blossoms prop, who delivered one of his best performances yet in the international arena. The 29-year-old stood up well in the scrums during a 57-minute stint but also did his bit on defence with 10 hits, while good support play was rewarded with a well-taken try.