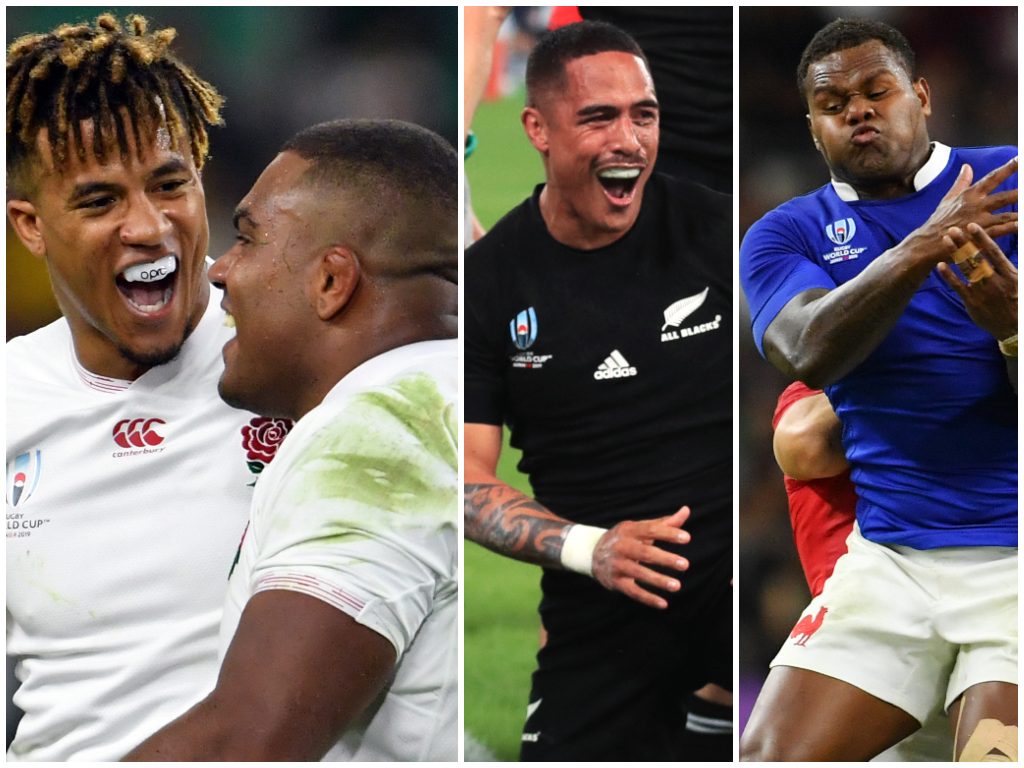 With the dust having settled on the quarter-finals of the Rugby World Cup, we have gone through the action and picked the standout players.

England lead with the way five representatives following their dominant victory over Australia, while there are three apiece from New Zealand and South Africa, who comfortably defeated Ireland and Japan respectively.

15 Beauden Barrett (New Zealand): Won the player of the match award after shining from full-back against Ireland. Barrett scored one try and set up another, finishing with 20 carries from the back, as his positional shift continues to bear fruit for boss Steve Hansen. Liam Williams can also hold his head high after the weekend as he produced a strong showing as Wales found a way to progress.

14 Anthony Watson (England): One England winger made our XV and while many would expect it to be May, we’ve gone for Watson. Why? He was outstanding. After coming back from a long-term Achilles issue, Watson is in the best form of his life and the Wallabies struggled to contain him on Saturday. He finished with a try and beat five defenders in Oita to edge New Zealand’s Sevu Reece to this spot.

13 Virimi Vakatawa (France): His best performance in a France jersey to date. Vakatawa was a constant threat to Wales with ball in hand as he ended with 52 metres from a whopping 14 carries. He beat five defenders along the way and was rewarded with a well-taken try for his efforts as he sees off young pair Jordan Petaia (Australia) and Jack Goodhue (New Zealand), who both impressed on Saturday.

12 Gael Fickou (France): Joining Vakatawa in our midfield is team-mate Fickou after a dominant performance against Wales. This French pair were incredibly unlucky to come out on the wrong side of their quarter-final result but look to have the makings of a promising partnership moving forward. Damian de Allende and Anton Lienert-Brown earn mentions after their workmanlike shifts, but Fickou was such a handful to the Welsh as he made 72 metres thanks to a mixture of brute force and finesse in midfield.

11 Makazole Mapimpi (South Africa): A difficult call on George Bridge and Jonny May as their try-scoring exploits on Saturday put them right in the selection shake-up. However, Mapimpi got the ball rolling for the Boks when his powerful finish silenced the Japanese crowd – for a minute at least – early on and his continued hard work resulted in a second try late in their 26-3 triumph.

🏆 Report as South Africa qualified for the semi-finals. 👉 https://t.co/HmOoG0J4VD pic.twitter.com/gzrrQMuweJ

10 Owen Farrell (England): The move to bring Farrell back to number 10 paid off, as expected. No one thought otherwise as Farrell boasts big-match qualities in every game he plays. He finished with 20 points off the kicking tee and set up Kyle Sinckler’s try with a wonderful pass that put the tighthead prop through a hole. We give mentions to Handre Pollard and Richie Mo’unga, who were also impressive.

9 Aaron Smith (New Zealand): We waxed lyrical on the performance of Smith after he led the All Blacks to a comfortable victory over Ireland on Saturday. A ball of energy and full of intelligence, Smith was the catalyst of New Zealand’s win as he scored two tries and put his team in the right areas. Faf de Klerk was runner-up for this spot as he was excellent defensively and offered plenty too on attack.

8 Kieran Read (New Zealand): We have been critical of the All Blacks skipper’s form over the past year, but Read was simply outstanding against Ireland and appears to be getting back to his best. The number eight was powerful in contact, making 24 metres in the tighter exchanges, and was typically dexterous in the wider channels. The former Crusaders man was also excellent defensively and takes the position from Australia’s Isi Naisarani, who impressed against England on Saturday.

7 Justin Tipuric (Wales): It was a poor performance from the Welsh on Sunday but there were a couple of very good individual displays. One of those came from their openside flanker, who had to be at his best defensively to halt a rampant France side. In total, Tipuric made 15 tackles, but it was at the breakdown where the back-rower made the biggest impression, making a crucial turnover as Les Bleus looked set to score. Elsewhere, Michael Hooper did his best in Australia’s disappointing loss.

6 Tom Curry (England): There were some outstanding performances from players on the blindside flank, with New Zealand’s Ardie Savea and Wales’ Aaron Wainwright both excelling. They are unfortunate to miss out but Curry was deservedly named man of the match in England’s triumph over Australia. The back-row made 17 tackles, was a threat at the breakdown and also had an assist to his name after providing the final pass for May’s opening try.

The MOST English thing that's ever happened. Love you Tom Curry! pic.twitter.com/5lRKfGYsYA

5 Alun Wyn Jones (Wales): The inspirational captain always stands up, even when his team are struggling, and the talismanic second-row helped his side back from the brink. France started superbly, going 12-0 ahead, but Jones’ leadership and defensive qualities came to the fore as he helped slow down their opponents’ regular supply of quick ball. In total, the lock made 15 tackles without missing any as the Welsh edged to a 20-19 triumph. Elsewhere, Sam Whitelock was excellent for the All Blacks while James Ryan was one of the few Irishmen to play well against the world champions.

4 Lood de Jager (South Africa): There weren’t too many standouts in this position so we have shifted the Springboks’ De Jager, who was colossal for Rassie Erasmus’ men against Japan. He helped the South Africans dominate in the air while the second-row was also immense defensively, finishing the game as the second highest tackler with 14. Those hits regularly forced the Japanese back behind the gain line as the Brave Blossoms struggled to get through an impressive Springbok wall.

3 Kyle Sinckler (England): Memorably scored his first international try when the Harlequins tighthead took an outstanding line to scythe through the Aussie rearguard, but that’s not the main reason why he’s in the team. Once again, Sinckler was ubiquitous in the loose, helping the Red Rose to control the encounter against arch-rivals Australia, while he was also solid in the scrum.

2 Malcolm Marx (South Africa): Prevents an all-England front-row as the powerful South African hooker just edges out Jamie George following an excellent display against Japan. Came onto the field after 37 minutes for Bongi Mbonambi and helped the Springboks gain even more dominance up front. His lineout throwing, seen as a weakness previously, was solid while Marx also contributed plenty in the loose, setting up De Klerk’s try after peeling off the back of a maul.

1 Mako Vunipola (England): Having barely played any rugby since mid-May due to a hamstring injury, this was a remarkable performance by the Saracens loosehead. Vunipola was on the field for 68 minutes and in that time contributed seven carries and a joint game-high 20 tackles. It is a timely boost for the Red Rose as they prepare to face a huge challenge against the All Blacks, with the prop’s match-fitness uncertain going into the Australia contest. As a result, he edged out New Zealand’s Joe Moody and Japan’s Keita Inagaki, who impressed against Ireland and South Africa respectively.