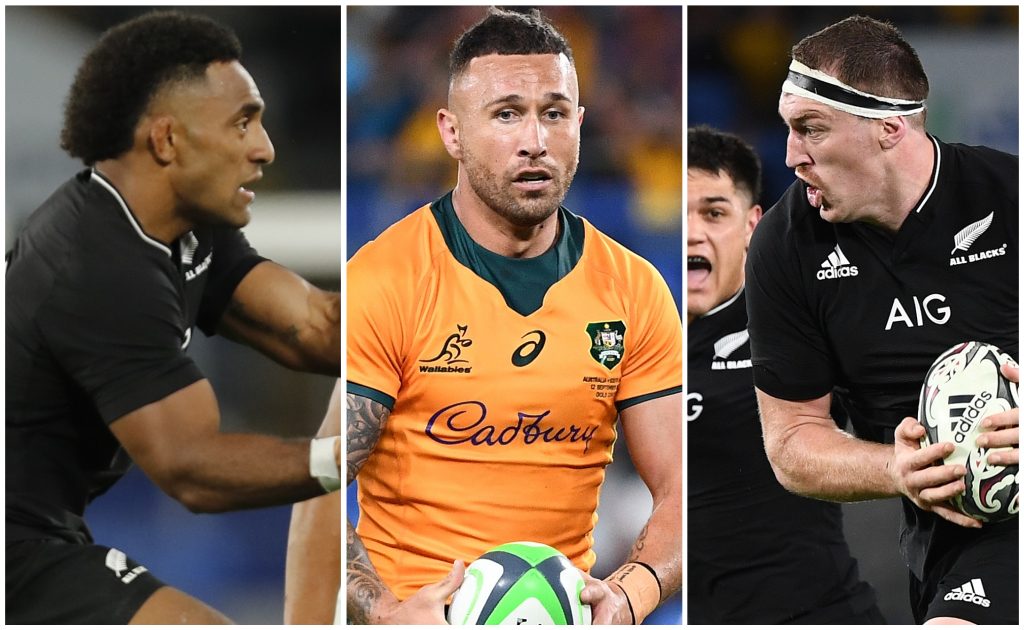 With the dust having settled on Round Three of the Rugby Championship, we have gone through the action to pick the best players from the weekend.

Unsurprisingly New Zealand lead the way with nine representatives and Australia come in next with six, which means there’s no South African or Argentina players in this week’s team. Are we wrong to do this or bang on? Have your say in the comments.

15 Jordie Barrett (New Zealand): While some may insist he shouldn’t have been playing due to that red card he was issued against Australia, there was no looking back from Barrett on Sunday as he impressed against Argentina. Incredibly solid under the high ball due to his size and athleticism, he was also impressive in attack with over 50 running metres made, and off the tee as he chipped in nine points. Fast becoming the All Blacks’ first-choice full-back.

14 Sevu Reece (New Zealand): The second member of New Zealand’s back three to make our team is Reece after he was his usual hard-running self over the weekend. Finishing with a try from close range for what is his fourth crossing in as many games, he was a constant thorn in the Pumas’ side as he regularly beat the first tackler. Australia wing Andrew Kellaway took his try well but with 11 runs for over 60 metres, we felt Reece more than did enough to make it.

13 Rieko Ioane (New Zealand): Wasn’t supposed to start against the Pumas but an injury ruled out Anton Lienert-Brown and the rest is history. The determined outside centre grabbed his chance with both hands as he opened New Zealand’s try-scoring account with an opportunistic finish and would go on to make a team high 131 metres with ball in hand. Blessed with speed and keen to evolve into a Test 13, this showing was very much another step in the right direction.

12 Samu Kerevi (Australia): Finally, the black wave of selections halt as a sprinkling of gold is added. New Zealand centre David Havili did run him close with another outstanding performance but it had to be Kerevi as our number 12 as he returned to Australia’s XV with a bang. He made a massive 17 carries for 46 metres, beating six defenders and also threw in a try assist to boot, proving to be the perfect foil to Quade Cooper as the midfield stood up.

11 George Bridge (New Zealand): The All Black wing spots are in rude health at the moment but Crusaders finisher Bridge is never too far away from being in pole position for the number 11 shirt. A hard-working, quick, skillful and deceptively powerful player, he was his usual busy self on Sunday as he made his team’s second most metres (114). All he can do when given starts is keep producing performance like this and he rarely dips in form. A quality wing.

10 Quade Cooper (Australia): As we said on Twitter, the script writers did their thing on the Gold Coast as Cooper’s return to the gold jersey was a special one. The veteran played the full game and looked incredibly assured, firing over points off the tee with ease, concluding with that incredible effort to win the game against South Africa. To beat Beauden Barrett to this jersey takes some doing but Cooper fully deserves his place here. What a comeback.

9 Nic White (Australia): The toughest selection of the lot as Tate McDermott laid the foundations for the Wallabies with another all-action and determined effort before he was forced off at half-time. White emerged and was his usual calm self just when Australia needed it as he combined well with Cooper to help orchestrate the victory, including winning the match-sealing penalty. While TJ Perenara also put his hand up for this spot, White’s typical big-game nature was evident on Sunday.

8 Luke Jacobson (New Zealand): The Chiefs number eight came into the All Blacks’ starting line-up – after stand-in skipper Ardie Savea was ruled out due to concussion – and made full use of the opportunity. Jacobson was superb with ball in hand as he gained 64 metres from 14 runs which included two clean breaks, three defenders beaten, an offload and a brace of tries. Springbok veteran Duane Vermeulen and Wallaby counterpart Rob Valetini also impressed.

7 Michael Hooper (Australia): The Wallabies captain continued with his superb form but unlike previous outstanding performances in the Bledisloe Cup series, his efforts were rewarded with a victory against the Springboks. As usual, Hooper emptied the tank at the breakdowns but also did well as a ball carrier, gaining 30 metres from a couple of carries, two clean breaks and as many defenders beaten. Dalton Papalii was next best.

6 Akira Ioane (New Zealand): Springbok hardman Franco Mostert caught the eye in a losing cause but loses out to Ioane, who continues to shine on the side of the scrum for his country. Although he did not reach the level of his previous performance, against Australia in Perth, the older Ioane will be satisfied with his shift against the Pumas. Did what was expected of him on defence, gained 37 attacking metres from nine carries with one clean break and five defenders beaten.

5 Izack Rodda (Australia): This was a difficult decision as no one really stood out in this position and Rodda slots in despite playing as front lock against the Springboks. The Western Force-bound second-row was at the forefront of the Wallabies’ forward effort especially at lineout time where he won his fair share of balls, including a crucial steal on South Africa’s throw-in.

4 Brodie Retallick (New Zealand): The All Black captain will be delighted that his team did not concede any points in their first match under his leadership but can also be happy with his own effort which was of its usual high standards. Retallick did well in the lineouts, was busy on attack as he gained 24 metres from 10 carries and also shone on defence with 13 tackles.

3 Nepo Laulala (New Zealand): The Blues front-row came to the fore with an industrious performance against Argentina and made his presence felt from the kick off with a huge hit on Pablo Matera. Continued to shine as the match progressed, especially in the execution of his core duties with his scrummaging and defensive work solid throughout. Beats out Australia’s Allan Alaalatoa.

2 Asafo Aumua (New Zealand): Springbok replacement Malcolm Marx is unlucky to miss out after scoring two tries against the Wallabies but we couldn’t leave out Aumua, who had a good outing in his first Test start. The 24-year-old impressed with some strong carries and eventually finished with 31 metres gained from 15 runs. Also put his body on the line on defence especially at close quarters.

1 Angus Bell (Australia): He had a baptism of fire in his side’s victory on the Gold Coast and gave as good as he got in some memorable exchanges against a strong Springbok pack. Despite being on the back foot on a couple of occasions in the scrum, he did not panic and won a crucial penalty at the set-piece just before half time against the highly-rated Frans Malherbe. Bok counterpart Steven Kitshoff also played well.