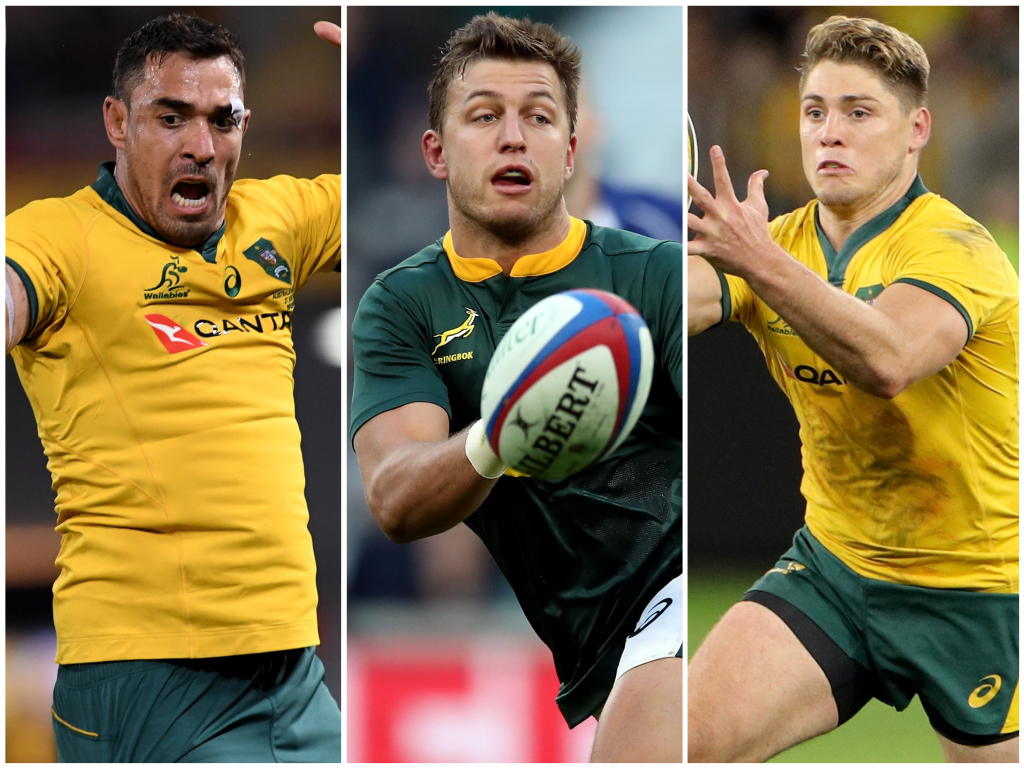 With the dust having settled on Round Three of the Rugby Championship, we have gone through the action to pick the best players from the weekend.

Following dominant victories over New Zealand and Argentina, the XV is unsurprisingly made up of Australians and South Africans. The former contribute contribute nine players to the XV, while the tournaments winners have six in the team.

Team of the Week: Rugby Championship, Round Three

15 Kurtley Beale (Australia): In the absence of Israel Folau, there were concerns as to who would fill the full-back role, but the Waratahs player has stepped up superbly and was outstanding as the Wallabies thrashed the All Blacks. Beale was a constant threat from the back, making over 100 metres, and was rewarded with the team’s final try. Alongside Christian Lealiifano and James O’Connor, they have plenty of ball players in the back-line and it bodes well for the World Cup.

14 Reece Hodge (Australia): Thrived outside the Wallabies’ talented centre partnership, scoring two tries, and was involved throughout the side’s impressive triumph. Cheslin Kolbe played well for South Africa, touching down once as they claimed the Rugby Championship in Salta, but Hodge was another key part of Australia’s outstanding victory over the defending world champions.

13 James O’Connor (Australia): Welcome back to Test rugby. While the former Sale Sharks player got a taste of action against Argentina, this was his first start and he was excellent in Australia’s victory. The 29-year-old set up the first try with a brilliant off-load to Hodge and then provided the assist for the wing’s second score. Anton Lienert-Brown was one of the All Blacks’ better players and did his best to drag New Zealand back into the contest, but O’Connor takes the position after a fine effort.

12 Samu Kerevi (Australia): Arguably the player of the tournament after another superb performance in the Wallabies’ midfield. His run for Nic White’s try was memorable and reminiscent of Manu Tuilagi’s surge in 2012 after they both swatted aside Aaron Smith and New Zealand’s star playmaker. In total, the Reds powerhouse ran for 88 metres from 20 carries and also did not miss any of his six tackle attempts.

How about the Lomu impersonation from Kerevi 😱😱😱😱😱😱😱😱 #AUSvNZL #BledisloeCup pic.twitter.com/4URdEOXNxY

11 Makazole Mapimpi (South Africa): Produced a good display, particularly in the second half, to help the Springboks move away from their hosts and seal a comfortable victory in Salta. With the South African forwards dominating, that opened the space out wide for Mapimpi and the Sharks wing ran for 59 metres, which included three clean breaks and a well-taken try. Marika Koroibete is unfortunate not to make it after impressing for the Wallabies, but Mapimpi edges him out.

10 Handre Pollard (South Africa): The standout performer at the weekend after accruing 31 points, which included two tries, three conversions and five penalties. Pollard controlled the game magnificently against Argentina, while he was also a constant threat with ball in hand. After spending a significant amount of time out of the game due to knee and shoulder injuries, which almost saw him have his arm amputated because of complications post-surgery, the pivot is back to his best and will play a huge part in the Springboks’ World Cup campaign.

9 Nic White (Australia): Bringing the scrum-half back to Australia is looking like an inspired decision from Michael Cheika after White’s stunning performance in Perth. Before this tournament, the ex-Brumbies player hadn’t featured for his country since 2015 after spending four years in the northern hemisphere with Montpellier and Exeter Chiefs, but white has come back revitalised. The 29-year-old was absolutely outstanding, dominating matters from the base of the scrum, and thoroughly deserved his second half try.

8 Duane Vermeulen (South Africa): The stand-in Springbok captain led his troops well as the Boks put the Pumas to the sword in Salta which helped them clinch the Rugby Championship title. Vermeulen did well as a ball carrier, gaining 40 metres from 11 runs with two defenders beaten, but also caught the eye on defence with seven hits.

7 Michael Hooper (Australia): Australia’s skipper was in the thick of the action and put his body on the line during a memorable win over the world champions in Perth. Hooper was involved in a memorable breakdown battle with All Blacks tearaways Ardie Savea and Sam Cane but the Wallaby came out on top in the end. Hooper also ran hard and eventually finished with 41 metres gained from 18 carries. Also completed eight tackles.

6 Pieter-Steph du Toit (South Africa): The All Blacks’ Ardie Savea deserves a mention after a fine effort in his first game on the blindside flank and the Wallabies’ Lukhan Salakaia-Loto also played well in that same game, but we could not leave Du Toit out, who, once again, put in a huge shift for South Africa, against Argentina in Salta. The Stormers stalwart defended well and made 13 tackles but also impressed with ball in hand, gaining 25 metres from 10 runs which included three clean breaks and one defender beaten.

All smiles for the @Springboks as they celebrate their #RugbyChampionship victory in Salta 😁🇿🇦 pic.twitter.com/EF99HI9E0i

5 Rory Arnold (Australia): The Toulouse-bound second-row got through plenty of work in that win over the All Blacks in Perth and was one of the Wallabies’ star performers. The 29-year-old did well in the lineout, was a willing ball carrier and also defended impressively, making six tackles, but made his biggest contribution in the loose and finished with a try assist. Franco Mostert of the Springboks was next best.

4 Izack Rodda (Australia): Springbok enforcer Eben Etzebeth impressed in his side’s win over Argentina in Salta but Rodda gets the nod for our team after a superb all-round effort in his side’s demolition of the All Blacks. The Queenslander did his bit in the lineouts but also did well on attack, with 19 metres gained from 12 carries, and on defence with seven tackles.

3 Trevor Nyakane (South Africa): The Springboks’ scrums were a thing of beauty in Salta and Nyakane was at the forefront of that effort as he anchored the set-piece superbly. The Bulls man was a bundle of energy and, apart from his excellent performance in the scrums, also completed 15 tackles on defence. Comes in ahead of Wallabies replacement prop Taniela Tupou.

2 Tolu Latu (Australia): There was plenty of pressure on the 26-year-old but he passed his test with flying colours in the Wallabies’ memorable victory over the All Blacks. Latu shone with ball in hand, gaining 33 metres from 12 runs which included one defender beaten. Also impressed in the execution of his core duties and defended well, making a handful of tackles. Bongi Mbonambi of the Springboks was next best.

1 Tendai Mtawarira (South Africa): The veteran prop was part of a strong scrummaging display from the Springboks’ pack and got the better of the Pumas’ Juan Figallo on a couple of occasions. Mtawarira also came to the fore with an excellent defensive display and eventually completed 13 tackles. Beats out the Wallabies’ Scott Sio.