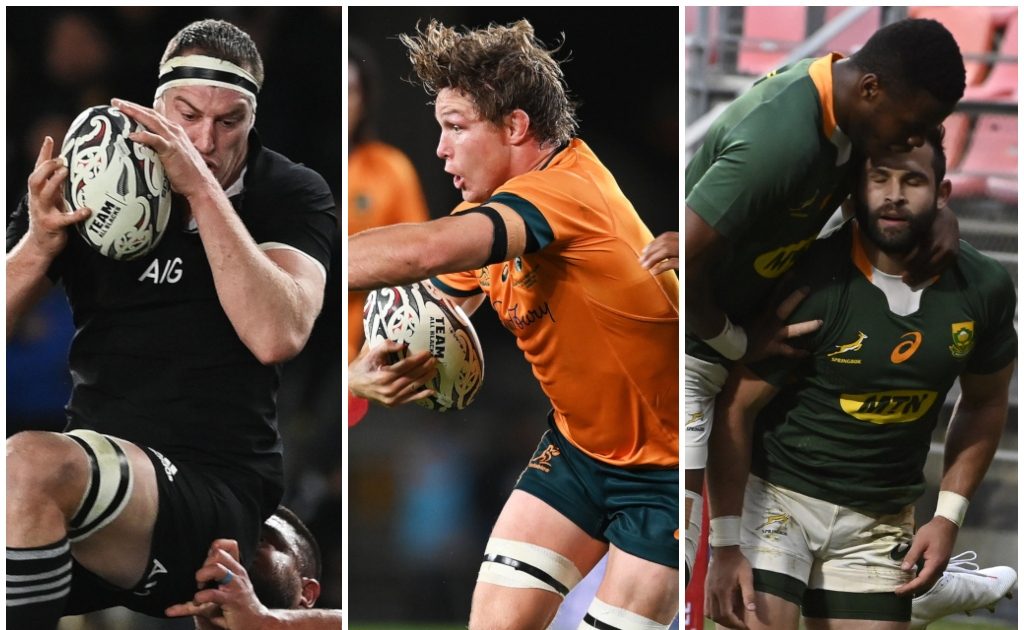 With the dust having settled on Round One of the Rugby Championship, we have gone through the action to pick the best players from the weekend.

New Zealand unsurprisingly lead the way with seven nominations following their dominant victory over Australia, while the other winners on Saturday, South Africa, are next best with six representatives after they defeated Argentina.

15 Damian McKenzie (New Zealand): Most of the full-backs struggled at the weekend with the All Black playmaker by far the most composed. McKenzie didn’t make too many metres with ball in hand but he provided an assist for Brodie Retallick’s try and landed am incredible long-range penalty. He was involved plenty in phase play and his passing and kicking game opens up plenty of options for New Zealand.

14 Andrew Kellaway (Australia): Has been impressive so far in his young Test career and, after scoring his first try last week, the Melbourne Rebel added two more to his tally. The first was an excellent finish as stepped inside McKenzie before touching down, while his second was slightly simpler as the wing crossed the whitewash after fine work from Matt Philip, Noah Lolesio and Tom Banks. Kellaway is also a smart player and reads the game well, and has rarely been caught out so far.

13 Rieko Ioane (New Zealand): There are still serious doubts as to whether centre is his long-term position, but the 24-year-old was excellent on Saturday. Ioane showed typically predatory instincts to score an intercept try to get the ball rolling before producing a brilliant pass for their second score. The main concern over the back in the midfield is his tendency not to straighten the line and therefore cramp the space in the outside channels, but that wasn’t an issue in the second Bledisloe Test. An excellent showing from Ioane.

12 David Havili (New Zealand): The Crusaders star has settled into the centre position nicely and produced another superb display in their dominant victory over Australia. Prior to 2021, Havili last played for the All Blacks four years ago but, after consistently impressing in Super Rugby, he has finally been given a consistent opportunity in the XV. The 26-year-old has been superb and once again shone on Saturday, scoring a try and always making metres with ball in hand.

11 Aphelele Fassi (South Africa): We were looking forward to seeing the Sharks flyer in action prior to the tournament and he didn’t disappoint at the weekend. South Africa’s style doesn’t often lend itself to the wings standing out, but he put pressure on the Argentines with the kick chase, looked dangerous when he actually got the ball in hand and scored a superb try. Somehow he grasped Elton Jantjies’ cross-field kick when it appeared to be going out and touched down under significant pressure from Argentina’s cover defence.

The hands from Aphelele Fassi 😲

10 Richie Mo’unga (New Zealand): There is no debate over the starting 10 at the moment because the Crusaders ace is quite simply well ahead of Beauden Barrett. He is playing some excellent rugby and showed his quality in the dismantling of the Wallabies at Eden Park. Mo’unga has everything in his armoury to be one of the All Blacks’ great fly-halves and could well keep the shirt for the next few years. No doubt Barrett will have something to say about that, but the 27-year-old is doing everything right currently.

9 Cobus Reinach (South Africa): This was an extremely tough call as Aaron Smith was exceptional for the All Blacks, while Tate McDermott had a superb first half for the Wallabies, but we’ve gone for Reinach. The Montpellier man has stepped up superbly following the injury to Faf de Klerk and produced another fine performance at the weekend. His kicking – perhaps a concern previously – was once again on point while he also managed to display his searing pace on Saturday, picking up a loose Argentinian pace and running 70 metres to score.

8 Jasper Wiese (South Africa): The Leicester Tiger came to the fore with a barnstorming performance in the Boks’ triumph over the Pumas and walked off with the official man-of-the-match award. Wiese is renowned for his superb ball carrying ability and he gained valuable metres for his team courtesy of some strong runs but also did his bit on defence. Beats out Ardie Savea of New Zealand.

7 Michael Hooper (Australia): The Wallabies might have been on the receiving end of a thrashing from the All Blacks but it was not through a lack of effort from their captain, who was outstanding. Hooper was his usual busy self at the breakdowns, did well on attack, where he made several impressive carries, and also gave his all on defence. Bok skipper Siya Kolisi was next best.

6 Akira Ioane (New Zealand): The older Ioane brother was in fine form for the All Blacks and played arguably his best ever game for his country since making his Test debut last year. He was a menace with ball in hand and kept the Wallabies defence busy with some strong carries – notably in the build-up to Brodie Retallick’s try – and also did what was expected of him on defence. Comes in ahead of Pablo Matera of Argentina.

5 Lood de Jager (South Africa): The Sale Shark showed why he is one of the best lineout operators in the game as he put in another polished display in that department against Argentina. De Jager marshalled that facet of play superbly, winning several balls and also managed a steal on his opponents’ throw-in. He also put his body on the line on defence and edges out All Blacks captain Sam Whitelock.

4 Brodie Retallick (New Zealand): The behemoth second-row showed why he was named World Rugby player of the year in 2014 as he put in an fine all-round performance in his team’s Bledisloe Cup triumph. The 30-year-old was in the thick of the action from the outset and showed good pace for his try. Retallick also impressed in the execution of his core duties especially in the lineouts.

3 Wilco Louw (South Africa): The Harlequins strongman came into the world champions’ matchday squad – after being out of favour for several seasons – and justified his selection with a workmanlike performance against the Pumas. Stood up well in the scrums and also put his body on the line on defence. His replacement Vincent Koch also impressed when he came on, as did Australia’s Allan Alaalatoa, but Louw is our tighthead.

2 Codie Taylor (New Zealand): Test debutant Joseph Dweba and Argentina’s Julian Montoya both impressed in Port Elizabeth but Taylor gets the nod as our hooker after an outstanding performance in New Zealand’a demolition of Australia. He hardly put a foot wrong during a 61-minute spell and was rewarded with a brace of tries for his efforts. Also helped Savea over the line from close quarters.

1 Ox Nche (South Africa): The 26-year-old’s stock continue to rise after another fine display in green and gold in only his third Test. Nche was a willing ball carrier, solid in the scrums and also did his bit on defence. Karl Tu’inukuafe also had a good game off the bench for the All Blacks but Nche gets in ahead of him after a better all-round effort.