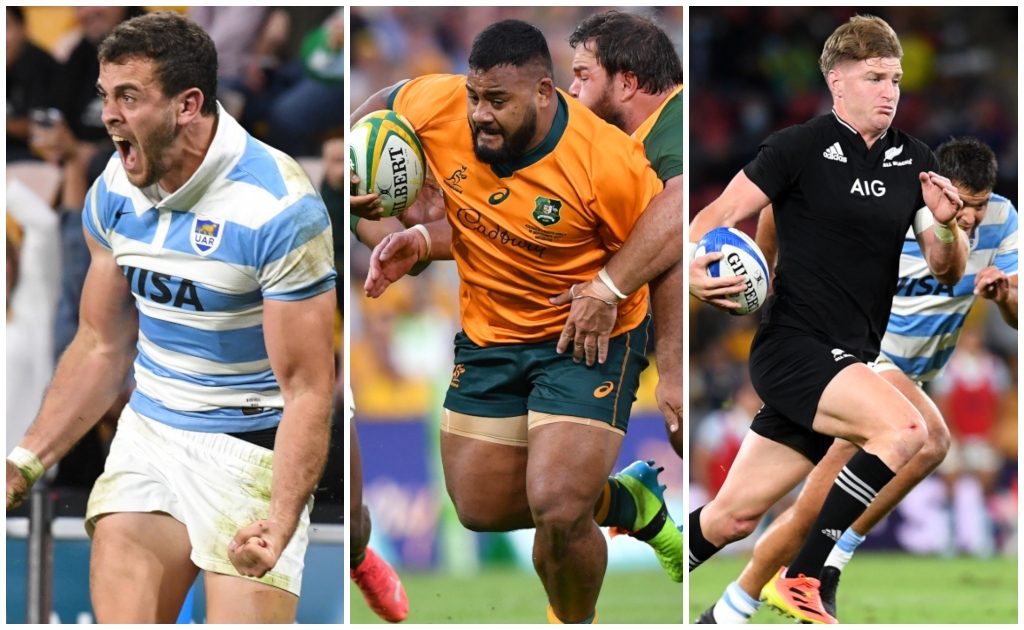 With the dust having settled on Round Four of the Rugby Championship, we have gone through the action to pick the best players from the weekend.

New Zealand and Australia were once again victorious, producing excellent wins over Argentina and South Africa respectively, which means they dominate the XV.

15 Jordie Barrett (New Zealand): Continued his fine form in the full-back jersey as the All Blacks recorded another comfortable victory over Argentina. With brother Beauden on the bench, Jordie took on kicking duties and was able to add four conversions and a penalty in Saturday’s triumph. He was also a consistent threat with ball in hand, beating seven defenders and finishing with 90 metres made. Barrett dovetailed nicely with Damian McKenzie and was a playmaking option that helped New Zealand to play their wide game.

14 Emiliano Boffelli (Argentina): Moved over to the right wing from the left but for good reason as the talented Edinburgh speedster was one of Los Pumas’ shining lights. Back in the first XV after missing out in their previous three Rugby Championship matches, Boffelli impressed in attack, scoring Argentina’s only try, and was also solid in the air. He took on kicking duties as well and scored eight points off the tee, which included a stunning conversion of his own try, and as a result beats off competition from Will Jordan (New Zealand) and Sbu Nkosi (South Africa).

13 Len Ikitau (Australia): The Brumbies centre has settled in superbly to Test rugby and once again produced an excellent display in the Wallabies’ triumph over the Springboks. Rieko Ioane was close to taking the position after standing out against Argentina but Ikitau deserves his place following his two-try showing on Saturday. The task for the 22-year-old is to build on his recent efforts and learn the lessons from previous incumbent Hunter Paisami, who initially impressed for Australia before suffering a case of ‘second season syndrome.’

12 Samu Kerevi (Australia): The last few games have shown how much the Wallabies missed the powerhouse centre in 2020. Despite being out of the international set-up for two years, Kerevi has shone since returning and was once again a veritable presence in the Australian midfield. Always a threat on attack and also solid defensively, the 27-year-old is a world-class player and gets in ahead of New Zealand’s Quinn Tupaea.

11 Marika Koroibete (Australia): Talking of world-class Fijian-born Australians, Koroibete also takes his place in our team after another stunning performance. Very few players have such influence on the wing but you wonder where the Wallabies would be without Koroibete in their side. The flyer has continually stood out over the past few years and was similarly influential against the Springboks, touching down twice. He works hard, often looking to get involved off his wing, and always makes dents with ball in hand.

The @wallabies reclaimed the Nelson Mandela Trophy thanks to a second consecutive win over the world champion @springboks.#RugbyChampionship #TRC2021 #AUSvRSA pic.twitter.com/zz6xdZQIIP

10 Damian McKenzie (New Zealand): With Richie Mo’unga still in New Zealand and Ian Foster knowing all about the quality of Beauden Barrett, the head coach decided to give McKenzie a shot in the fly-half jersey. There wasn’t any significant drop-off with the playmaker often making the right decision and linking well with his midfield and Jordie Barrett throughout Saturday’s clash. Quade Cooper continued his international comeback with another fine effort for Australia, but it wasn’t enough to get in ahead of McKenzie.

9 TJ Perenara (New Zealand): No Aaron Smith, no problem for the All Blacks as Perenara displayed his considerable talents at the weekend. After being on the bench for the final Bledisloe Cup Test – Brad Weber was the preferred option – the Hurricanes scrum-half was handed the reins for the two Argentina Tests and has impressed. Perenara has often struggled to exert the same type of influence from the start at international level, in comparison to coming off the bench, but the last couple of weeks have been promising from the 29-year-old. He has shown excellent composure and control, and takes the position from Australia’s Nic White.

8 Hoskins Sotutu (New Zealand): Came into the All Blacks’ run-on side against Argentina and gave Foster a timely reminder of his capabilities with an outstanding performance. Tested the Pumas defence with excellent ball carrying and two of those runs set up tries for Patrick Tuipulotu and Perenara. Sotutu eventually gained 59 metres from 11 carries with one clean break and a defender beaten and comes in ahead of Rob Valetini of Australia.

7 Michael Hooper (Australia): The veteran tearaway makes our team for the second successive week after another polished display in a memorable triumph over the Springboks. Hooper set a new Wallaby captaincy appearance record and delivered a performance fitting for the occasion. The 29-year-old proved a menace at the breakdown, impressed with ball in hand and was superb on defence where he completed 13 tackles. All Black Ardie Savea was next best.

6 Ethan Blackadder (New Zealand): The All Blacks are blessed with several outstanding loose forwards and Blackadder showed why he is so highly rated in New Zealand with a fine performance in their fourth successive tournament win. The 26-year-old put in a workmanlike effort, gaining 23 metres from 11 carries with one defender beaten as well as three offloads. He was also busy on defence with 11 hits.

5 Tomas Lavanini (Argentina): This was a difficult decision as Matt Philip of Australia also caught the eye during his side’s triumph over the world champions but Lavanini gets the nod after a fine performance in a losing cause. The Pumas second-row did well in the lineout, impressed on attack with 26 metres gained from seven carries but made his biggest impact on defence with a match-high 19 tackles.

4 Tupou Vaa’i (New Zealand): The rookie second-row showed he belongs at Test level as he came to the fore with an excellent all-round showing against Argentina. The 21-year-old played with a maturity beyond his years and kept the Pumas defence on their toes with some fine runs. Finished with 44 metres made from 10 runs with one clean break, a defender beaten and a deserved try. Also made nine hits and beats out Izack Rodda of Australia.

3  Taniela Tupou (Australia): After starting the Wallabies’ three previous matches in the Rugby Championship on the bench, the ‘Tongan Thor’ came into the run-on side against the Boks and delivered a superb display. Tupou stood up well in the scrums, was a menace with ball in hand as he gained 24 metres from three carries which included two clean breaks, four defenders beaten and a delightful offload for Koroibete’s first try.

2 Samisoni Taukei’aho (New Zealand): It was a momentous occasion for the Chiefs hooker as he was making his first Test start and he celebrated it with a superb display during a 48-minute stint on the field. Taukei’aho proved dangerous with ball in hand as he gained an impressive 58 metres which included one clean break, a defender beaten and he was rewarded with a five-pointer for his efforts. Also caught the eye on defence with eight hits.

1 Joe Moody (New Zealand): The veteran front-row made his first start for the All Blacks since 2020 and made a big contribution in his side’s triumph over the Pumas. The 33-year-old gave a good account of himself in the scrums and delivered a busy shift on defence – especially at close quarters – where he completed seven tackles without missing one.