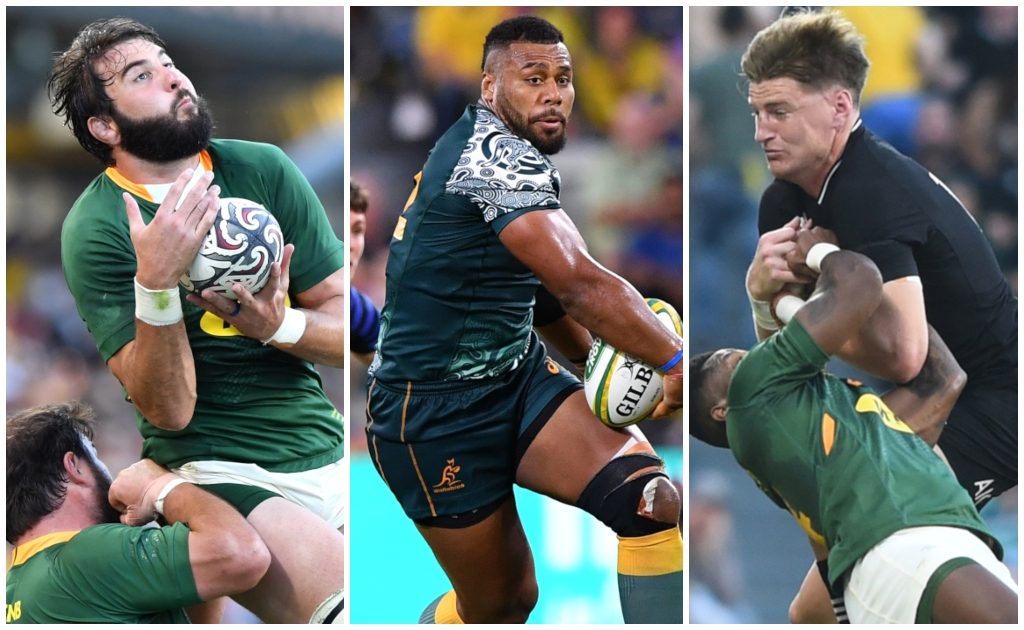 With the dust having settled on Round Five of the Rugby Championship, we have gone through the action to pick the best players from the weekend.

Following Australia’s third successive victory in the 2021 Rugby Championship, where they saw off the threat of Argentina, Dave Rennie’s men have the most representatives. The rest of the team is then split between the All Blacks and Springboks, who had a ding-dong battle at the weekend.

15 Jordie Barrett (New Zealand): The only non-Australian in the backline, Barrett was nerveless under pressure, kicking the winning penalty to ensure that the All Blacks secured the Rugby Championship title and remained unbeaten in 2021. He has had a fine tournament, cementing himself as the number one New Zealand full-back going forward. The 24-year-old was also the side’s best attacking threat with his team-mates generally struggling to break down the Springboks’ stubborn defence.

14 Andrew Kellaway (Australia): It’s been some start to his Test career with the Melbourne Rebel adding another try to his tally in the win over Argentina. It’s not just his scoring exploits, however – albeit it now stands at five tries in as many starts – with Kellaway’s all-round game standing out. He may not have the searing pace of other wings or the balance and footwork of the likes of Cheslin Kolbe, but the 25-year-old is a very intelligent wing and gets the nod over Will Jordan and Sbu Nkosi.

13 Len Ikitau (Australia): Another Wallabies player that has produced a series of fine individual displays since coming into the side. Ikitau is always a threat with ball in hand and regularly caused problems for the Argentinians on Saturday, but he is also solid on defence. It is why he takes the place from Lukhanyo Am, who was once again masterful without the ball but never got an opportunity to display his attacking credentials due to the Springboks’ game plan.

12 Samu Kerevi (Australia): We’re running out of superlatives for the brilliant Wallabies centre. Some players take time to readjust to the Test arena when they’ve been away for a couple of years but not Kerevi, who has shone in the Rugby Championship. The powerhouse was a constant thorn for Argentina’s defence in the 27-8 victory in Townsville and made 84 metres in total, which included six defenders beaten, two clean breaks and a try. No other inside centre came close to matching Kerevi’s efforts.

11 Marika Koroibete (Australia): With George Bridge, surprisingly for him, having an absolute shocker, Makazole Mapimpi simply not receiving any ball to work with and Emiliano Boffelli struggling to make an impact, there was only one option for this position. Quieter than he has been but still a very effective cog in the Australian machine, Koroibete consistently made ground on Saturday, finishing with 52 metres from nine carries.

The @wallabies proved too strong for @lospumas in the Rugby Championship, making it three straight wins for the first time in four years.#RugbyChampionship #TRC2021 #AUSvARG pic.twitter.com/aMeaSSkltz

10 Quade Cooper (Australia): We were very impressed by James O’Connor’s cameo but, for his excellent 57 minutes on the park, the 33-year-old takes the shirt once again. Cooper still produces moments of magic but he has certainly matured as a player and that has been shown over the past few weeks. The 73-times capped pivot is now a great decision-maker and controls the game superbly, playing a crucial role in the Wallabies’ resurgence. We initially thought his selection was a stop-gap but, such is Cooper’s form, perhaps he is the fly-half to take Australia into the next World Cup?

9 Nic White (Australia): It was certainly a much improved effort from Faf de Klerk, whose tactical game caused all sorts of problems for the All Blacks. He kicked well throughout but did so perhaps too many times and towards the end of his stint on the field made a few too many errors. De Klerk certainly outplayed the disappointing TJ Perenara but didn’t do enough to usurp White, who was calm and composed against Argentina. The Brumbies scrum-half did the basics extremely well and, alongside Cooper, dictated the game on Saturday.

8 Rob Valetini (Australia): The Brumbies back-rower is one of the most improved players in the Wallabies squad and put in a superb all-round performance in his side’s victory against Argentina. The 23-year-old was his usual busy self on attack and eventually gained 27 metres from eight runs with one defender beaten and managed an offload. Also shone on defence with 10 tackles made.

7 Siya Kolisi (South Africa): The Springbok skipper played arguably his best Test since his country’s 2019 Rugby World Cup triumph in Saturday’s narrow defeat to the All Blacks. Kolisi led from the front with some strong carries and a solid defensive effort as the Boks took the fight to their opponents. He also caught the eye with excellent counter rucking which disrupted New Zealand’s usual flow and also won a crucial turnover.

6 Ethan Blackadder (New Zealand): The Crusader started on the openside and his duel with Kolisi was one of the highlights of their encounter but we had to find a place for him in our XV as he was outstanding during an 80-minute shift in Townsville. Blackadder was a menace at the breakdowns but did his best work on defence and finished with a team-high 10 tackles made. South Africa’s Kwagga Smith and his replacement Marco van Staden also impressed.

5 Lood de Jager (South Africa): Another Springbok who took the challenge head on against the All Blacks and delivered an outstanding display in the 100th Test between the arch rivals. De Jager is renowned as one of the game’s best lineout exponents and he was outstanding at the set-piece and even poached a couple of his opponents’ balls. Also carried well and completed 10 tackles.

4 Scott Barrett (New Zealand): Another middle lock but we’ve shifted Barrett to the front spot as he put in a huge performance against the Boks. The 27-year-old was strong with ball in hand, gaining 34 metres from six runs with one clean break, a defender beaten as well as an offload. Also completed six hits and comes in ahead of South Africa’s Eben Etzebeth.

3 Taniela Tupou (Australia): This was a tough selection as Frans Malherbe was the cornerstone of a strong scrummaging display from the Springboks but Tupou gets in for the second successive week after another fine all-round effort during a Wallaby victory. Tupou’s attacking skills kept the Pumas busy and he finished with 40 metres gained from seven runs with two defenders beaten. Also impressed on defence with eight tackles completed.

2 Codie Taylor (New Zealand): Argentina’s captain Julián Montoya and Folau Fainga’a of Australia were involved in a hard-fought battle in their Test but Taylor gets into our team after shining for New Zealand against South Africa. The All Black impressed from the outset against the Boks and left his stamp on that match with a superb line break early on which set up a try for Jordan. Taylor eventually made 45 metres from six runs and beat two defenders.

1 Steven Kitshoff (South Africa): Although Trevor Nyakane had a good game in his 50th Test for the Boks, he was overshadowed by his replacement, Kitshoff, who made his presence felt in the implementation of his core duties during a 40-minute spell in Townsville. Came to the fore with a strong scrummaging display and also put his body on the line on defence where he made six tackles.